Angie, a teen aged girl, was killed in a tragic accident. As a ghost she became convinced her boyfriend Dickie still loved her, so she decided to return to Earth and win him back. But her timing was a little off--thirty years off!--and she found him grown, married, and with teen aged daughters of his own. When she discovered she was stuck there and couldn't return, she figured there was no choice but to break up Dickie's marriage... 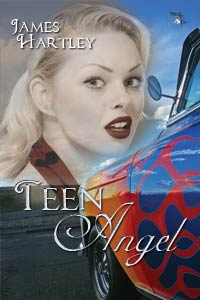 As if on cue, Brenda, Rosalie, and Angel entered the room.

“Hi, Uncle Walt, Aunt Barb,” chorused Brenda and Rosalie, while Angel settled for, “Hello, Mr. Smith, Mrs. Smith.” Brenda, who was closest, passed sodas to the others and grabbed a beer for herself, saying, “These are for us, aren’t they? Thanks, Mom.” The three of them settled on the couch.

Rick said, “Wait a minute, girls. Walt came over here to show me something special. It might be confidential. If it is, you girls will have to go in the other room. You know you’re not allowed to listen in on legal business, especially if clients’ privacy is concerned. What about it, Walt? Should I chase them out?”

“No, no, Rick. Don’t chase Angel out. What I have to tell you is really about her. And you might as well let the girls stay too. I’m sure they’ll want to know what’s going on, and they probably ought to find out.”

“Walt, what in the hell are you talking about?” asked Rick. “You’re acting like a CIA agent about to date a Russian spy. Did you just catch Angel selling defense secrets to the KGB, or is it something worse?”

Angel bristled at this and protested, “Dickie! I wouldn’t do that! I would never betray my country, or President Eisenhower either. I’m a loyal American.”

Walt gave her a strange look, and it was obvious he was prepared to refuse to believe anything she said. Then he said, “Rick, I really want you to know I’m your friend. I’m on your side, no matter what it may look like. I don’t know if you’re the victim in this scam, or if you got caught up in it by accident, or what. I just want to help you. But even if you’re in it deliberately, I don’t blame you. I’m sure you had a good reason, and I’ll help you.”

Rick looked exasperated, and Lois said, “Walt, you are babbling like a brook. You’re not making any sense at all. Would you please stop apologizing and start explaining? I would really love to know what you’re going on about.”

“Yes,” said Barb from the rocking chair, “I think you better get to the point, dear, before everyone explodes from curiosity. Just like this cat.” Blackstone had jumped up on her lap, and she was gently scratching his ears.

“Okay, okay, okay! I’ll get to the point. The point is this girl here,” he pointed at Angel, “this girl who claims to be a cousin. She’s a fake. She’s scamming you, after your money, or something.” He stopped as everybody tried to talk at once and waved his arms for silence. When it was quiet again, he continued, “I checked every Gossett in the state of New Jersey, and not a one of them has a daughter named Angel. Or Angela or

Angie or anything similar. How do you explain that?” Rick started to say something, but Walt waved him down again with one hand, pulling papers out of his brief case with the other. He spread them on the coffee table and said, “Look at these.”

Everybody leaned forward to look, and even Blackstone trotted over to sniff at the papers. The cat was easily satisfied and went back over to the rocker and curled up for a nap, but the others stared longer at Walt’s treasures. He had gotten a copy of Angie’s school photo from the year before she was killed, and a number of old newspapers with stories of the accident and pictures of Angie. The resemblance to Angel was unmistakable, but neither the Parkers nor Angel were the least surprised by it. Lois, trying to defuse the situation, said, “Quite a family resemblance there, isn’t there?”

Walt retorted, “Family resemblance my ass! It’s far too good. I’ll bet close examination would show plastic surgery. She’s here to get something from you; I’d bet on that.”

“Well, one out of three ain’t too bad,” muttered Rick under his breath. Then, in a normal tone, “Walt, we know where Angel is from, and why she’s here. Thanks for trying to help, but everything is under control. Why don’t you just relax?” He leaned back in his chair.

There was silence for a moment, broken only by the squeak of Barb’s rocker. Then, suddenly, there was a horrible screaming hissing noise. Barb had rocked onto Blackstone’s tail.

Blackstone rose gracefully into the air, as cats are wont to do in such circumstances, in an arching trajectory that ended in Angel’s lap. The big Siamese landed there with all eighteen claws fully extended and attempted to dig in for safety. Unfortunately, this proved a painful surprise for Angel, who had been paying no attention whatsoever to the cat. She in turn let out a loud scream, but instead of jumping, she vanished. This left Blackstone in midair, startled that his support had vanished, before dropping to the couch. He let out one more yowl, clawed his way up the back of the sofa, over it, and then vanished from the room, still spitting and hissing. Once Blackstone was gone, there was silence until finally Lois said, “Oh, shit!” Walt was still staring at the empty space where Angel had been, his jaw hanging open in shock.

Barb had a similar stunned look on her face, but she recovered faster. She started to rock again and said, “I just can’t wait to hear this.” Walt nodded.

Rick and Lois looked at each other, and finally Rick said, “Well, you see, er, it’s like this. Angel is a ghost.” He paused to see what effect this had had on the Smiths. Both looked a little strained, but neither had fainted at the information, so he continued, “Angel is the ghost of Angie Gossett, my old girlfriend. The one you have all the pictures of…there.” He waved vaguely at the coffee table.