Kerry is headed back to her cabin to take care of tell-tales, those little things that remind her of her dead husband.She has nothing but bad memories, and is ready to start fresh.

Garth has been using the outbuilding on Kerry's property without her knowledge, and isn't inclined to leave. In fact, he feels the need to move into the main cabin with Kerry, whether she wants him to or not. He also thinks he can take anything he wants, including her.

Is Garth really her master, or will his own tell-tales allow Kerry to take control? 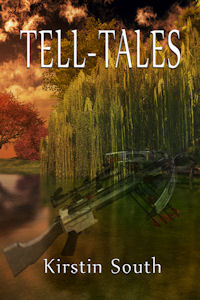 Bull. The word leapt quickly into Kerry’s mind. Angry bull. Well, what the hell am I going to do with an angry bull on my dock? she thought with a strange mixture of anger and fear.
Do what it least expects you to do, she guessed. Wave a red flag at it. Get rid of it. I mean, just his being here could spoil everything.
She took down her hunting crossbow from above the front door and cradled it in her left arm before she opened the door and stepped out onto the roofless front porch.
The man stared up as she appeared, but his expression of distaste did not change.
Kerry took her time to establish herself as the one in the superior position before she broke the silence by saying--she hoped with the same disdainful tone as his facial expression, "Anything I can do to help you, Mister Whoever-You-Are?"
"Not unless you can shoot me some fish with that thing," the man replied, nodding toward the crossbow.
"Actually, I had a larger target in mind, if it doesn’t get off my property," Kerry said. "This is private property, you know."
"Never doubted it," the man grunted, sitting down and picking up his fishing rod. "But doesn’t seem to me you use it much after Labor Day."
"Why should that matter to you?"
"‘Cause the fishing usually gets better then. Cooler water, you know. And, since you ain’t here much, if at all..." He cast his lure far out off the dock, turning his back to Kerry.
"It’s still our property whether we use it or not," Kerry fumed. "Besides, how do you know we don’t use it in the fall?"
For a long moment, Kerry didn’t know if the man had heard her or not, but then she saw his shoulders shrug, as if deciding something, and he said, still not turning to her, "Guess I been watching this place three or four years now.Been pitchin’ a tent over on the east shore, for a coupla months fishin’ and huntin’. And you get to see a lot between strikes, you know. Particularly if you have binoculars. So I seen you and your husband close up the cottage every year on Labor Day and I noticed you never came back. Then, this year, it was just you shutting down the place, and I said to myself, ‘Well, she sure won’t be back this year...’"
"So you just moved in," Kerry grunted angrily. "Your mistake."
"My mistake was guessing you wouldn’t be back." The man turned around now and he was smiling...a kind of half-sneer, Kerry thought. "Yours was proving me wrong," he said.