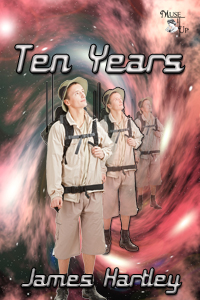 When Peter pressed the switch, everything went dark. Then, as his eyes became adjusted to the darkness, he realized he could see a few things, like the luminous dial on his watch, and, if he twisted his neck a bit, the pilot light on the time machine itself.

As suddenly as it had appeared, the blackness vanished again, and Peter was standing in the lab, but a totally changed lab. It was deserted and looked like it had been for a long time. There was dust all over everything, what little equipment remained was rusting and broken. Most of the window panes had been shattered. Peter looked around, a cold sick feeling arising in the pit of his stomach. This was not just a single day later.

A quick check of the lab didn't turn up anything useful. The office outside had a faded 2015 calendar on the wall. 2015, he thought, that shows I moved at least two years, and that calendar is anything but new. The office, and several others down the hall, were all deserted, abandoned. He reached the front door and looked out. In front of the building, where Mr. Carlson's prized lawn had been, was a jungle of weeds.

Peter pushed the door open, and there was the sudden clangor of an alarm. Great, he thought, only one thing is still working, and it has to be the alarm. He continued out the door and down the path to the parking lot, only to discover that he was fenced in by a tall cyclone fence that had not been there when he started his trip. There was a gate, and he tugged at it, but it was firmly locked. It looked like it wasn't going to matter, several police cars were screaming into view, lights flashing. He stood by the gate and waited.

The first cop to arrive at the gate looked him over then asked, "Okay, buddy, how the hell did you get in there?"

"I work here, officer. I was running an experiment in the lab, and I seem to have stayed a little longer than expected. Could you please let me out?"

"You work there? Come off it. Nobody has worked there for years, not since the place went bankrupt. Yeah, we'll let you out, and then we'll give you a nice little ride. Straight to the station house."

Another cop came hurrying up with a set of keys and soon had the gate open. True to his word, the first cop hustled Peter over to a squad car after a quick frisk and shoved him in the back. "You behave yourself, and we won't have to handcuff you," he said. "But if you give us any trouble, well, you ain't gonna like it. By the way," he said as he slid behind the wheel and started up, "what's in the backpack?"

Uh- oh, said Peter to himself, I have a feeling that telling him it's a time machine might not be the best idea. He thought quickly then said, "It's some experimental scientific equipment, officer, a, er, a temporal displacement generator. The, ah, calibration was off, that's how I got in there."

"Oh. Yeah. A temporary thingie. If it got you in there, how come you couldn't get out?"

"Once I saw the calibration was off, I was afraid to try it again. Who knows where I would have ended up?"

"Sounds sensible. You just explain all that to the lieutenant, and you're maybe not in too much trouble." He lapsed into silence for the rest of the drive.