Rather than letting her head or her heart figure whether to forgive him, she decides to put Tom through a series of challenges that will prove his devotion to her—or not. Testing Tom is not something she’d ever expected she’d have to do, but to her, it’s the only way she can be sure whether he’s back for good. 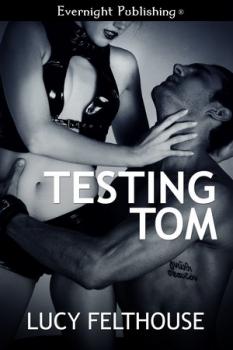 Katrina shook her head. She’d never been able to understand why Tom had left her in the first place. It wasn’t arrogance that made her think that, just that they’d been so happy, so compatible, both in and out of the bedroom. They didn’t have a full time D/s relationship—to the outside world they were just a normal couple. But when they were playing their kinky games in the bedroom, Tom’s cock had always been so damn hard that she often thought he’d be able to chop wood with it. She just couldn’t work out how he could have walked away from such a satisfying relationship.

What annoyed her the most was that it had come completely out of the blue. He hadn’t shown any signs of being discontent, of his feelings changing for her, hadn’t become distant. So when he’d dropped the bombshell on her, she felt as though a rug had been pulled out from under her, landing her on her arse with an almighty splat.

Now, though, he’d provided some explanation, and as much as it pained her to admit, it did make sense. As much as society was changing, becoming more open-minded, there were some things it still couldn’t quite get its head around. In fact, many people had an easier time getting their head around gay and lesbian relationships than they did ones that included BDSM practices. Perhaps it was the pain element they didn’t understand—how people that loved each other could bear to inflict and to receive so much physical pain, though there was more to it than that. But of course, unless they tried it, they wouldn’t ever understand. And so they remained ignorant, remained blind to other possibilities. It was that, it seemed, that Tom couldn’t handle—having to either keep their D/s activities private, other players excepted, or having people know and treat them differently.

Apparently, though, he’d overcome this problem. His time away from her, time spent with the vanilla chick, had seemingly made him realize he couldn’t live without it, without her. And he wanted to be true to himself. Whether he had the guts to out himself remained to be seen, but she’d never push him into anything like that. What mattered to her was having him back in her life, in her bed. They didn’t have to be out and proud to the world for her to be happy—there were enough special events around that she could openly attend as Katrina Kalen, Dominatrix, to keep her satisfied, to remind her that she didn’t have to be inside the four walls of her home—or Tom’s—to truly be herself.

So if they could just get past this blip, this breaking of trust, then there was no reason they couldn’t be together and be as happy as they’d been before Tom had lost his mind. Happier, even, given his new acceptance of his preferences and what they meant.

The positive thoughts sent warm, fuzzy feelings rushing through her body and she smiled. Another misconception people had about Dominant women was that they were all cold, heartless bitches. Granted, many of them—herself included—acted like that during a scene, but good ones would also be aware of how their submissive was feeling, physically and mentally, and would act accordingly. She had personally never given Tom more than he could handle, and their games were just that, games. Sometimes sex was part of their games, with tying up, blindfolding and more, and other times she’d whip his arse or similar, then release him and they’d crawl into bed and fuck in all kinds of ways, including vanilla. Missionary, cowgirl, doggy style, it was all the same to her when Tom was inside her—perfect.