She snuck aboard his ferry, and if he can save her life, she'll repair the hole in his heart.

Dr. Amelia Everett is a respectable psychologist from New York City. She wants only to find out how so many of her patients are getting healed emotionally from their stay at the Wiccan Haus. The only problem? Every time she tries to schedule a visit, she is denied entry What other choice does she have except to sneak on the boat?

Damek Antonov is a ferry boat captain with a broken heart. He spends his days shuttling passengers to and from the island but whatever magic his charges find there, he has not seen any himself. But, when Amelia is made Damek's responsibility, the two will find that taking risks might lead to the great adventure ever: love.

Dr. Amelia Everett had resorted to sneaking onto ferryboats. She had two PhDs, had been published in more journals than she could count, and owned an apartment on Park Avenue with three bathrooms. Yet she’d sneaked onto the back of a ferryboat like a common criminal.

The incident in her office with Daniel must have bothered her more than she’d admitted. How else could she explain what she was doing? Rational women did not do these things.

She pushed her black hair out of her vision and tried to make herself smaller. As long as she could get out of the luggage storage compartment and off the boat without anyone noticing, she’d be okay.

Drumming her fingers on the floor of the boat, she counted to ten. That’s the advice she gave her clients when they asked how to calm themselves. Of course, she also told them not to get into situations like this.

A burst of light startled her, and she shrieked. The brightness came from a flashlight beamed right in her face. Whoever held the blinding device remained in shadow.
“I knew there was somebody down here.” The man spoke in a low voice. “And now what am I supposed to do with you?”

“Well.” She tried to keep her voice level. Even in this less than desirable circumstance, she needed to remain composed. Fear never solved anything. Still, she shoved her shaking hands in her pockets. “You could go ahead and get that light out of my face so I could speak to you.”
The flashlight went out, but, seconds later, someone hauled her to her feet. Though she still couldn’t see her captor’s face, two things caught her attention. First, he was tall, very tall. Amelia stood at five-foot-ten in her bare feet, and he towered over her. Second, he smelled amazing. She took a deep breath, inhaling the mixed aromas of sandalwood and springtime. The combination made her hot inside. If she weren’t worried he’d pull her along and dump her overboard into the Atlantic, she might enjoy being close to him.

They stepped together onto the deck. The light illuminated his facial features. His high cheekbones accentuated large, dark-brown eyes. His hair, also dark brown, had been cut very short on his head. His chin pointed out a bit over thick, full lips covering perfectly straight teeth, visible as he bit down on his lip.

His nose gave his face character. Too large to be called traditionally attractive, it gave him a striking, unforgettable appearance.

“Who are you?” The low baritone voice again.

She smiled, trying to seem nice, like the sort of woman he wouldn’t want to throw into the ocean. “My name is Dr. Amelia Everett. If you let go of my arm, I’d be happy to show you my card.”

“No, missy. I don’t have the slightest interest in seeing your card. What are you doing here on this ship? You were not invited.”

Invited? What a strange choice of words. “Right, well. I’ve been trying to get a reservation at the Wiccan Haus now for six months. As they are never willing to let me book a room or even discuss the possibility of coming to the island, I had to take matters into my own hands. One way or another, I am going to the Wiccan Haus today.”

Her captor laughed, easing some of the severity of his appearance. “Oh, this is rich. They’re going to love this.” He shook his head. A necklace he wore fell free from where it had been hidden in his black shirt. He grabbed it to tuck it back in, but for a second, a wedding ring attached to the long metal chain swung free.

She’d seen many of her clients wearing rings in that manner. It usually meant grief, mourning for the person who had once worn the mate to that ring. In her business, she had learned to hide her emotional reactions to things, but even as her face remained calm, her heart went out to him.

He continued, “One of two things is going to happen to you now. You’ll either not get to the Wiccan Haus, and this will all be for naught….”

“Or you’ll get there and wish you hadn’t. They’ll interrogate you before putting you back on my boat to go home, if you’re lucky.”

“I don’t think anything needs to get that dramatic. Certainly, we can all work this out like adults. All I’m looking for is a tour of the island, an explanation of how they do what they’re managing to accomplish with their clients—many of whom were my patients before coming here. I want to look around, see if we can figure out a mutually beneficial agreement. I’m sure I have means to help them.”

The man dropped her arm, and she rubbed it. Why had she gotten cold as soon as he stopped touching her?

“To humans? Oh, you’re a paranormal. Of what variety?” 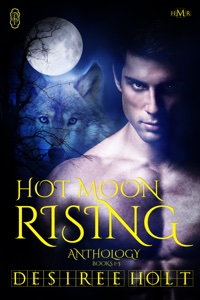