He’s known on the sands as Beach Brat Brody, the arrogant surfer with his group of loyal fans. Finn and his best friend Trent are lifeguards, and Finn has been captivated by Brody since he first saw him surf. He’s hot, skilled, and has Finn’s heart.

He doesn’t just want to know the Beach Brat, but also the man behind the board. But Brody is guarded and gives nothing of himself away. He doesn’t do relationships, and Finn doesn’t do one-night stands.

Encouraged by his friends, Brody tackles a dangerous wave and Finn rushes to save him. The Beach Brat loses his sass and his confidence. Putting aside his broken heart, Finn vows to help Brody get on the board again.

They tackle his fear of the sea together, and Finn catches glimpses of the hidden Brody. His walls come down, and things start to look promising, but Finn has his own demons. Just as him and Brody begin to get close, Finn rushes into the sea for a dangerous rescue that might cost him everything. 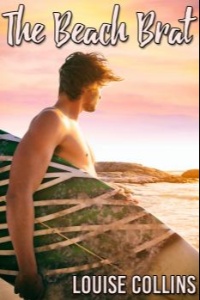 Trent flapped his hand at the thickening cloud, then the unsettled sea. “Going in there is the definition of stupid.”

Brody spoke over his shoulder. “Do you think I’m stupid?”

Reece stood closest and slammed his hand down on Brody. “Course not, we know you can do it.”

The smile on Brody’s face faltered for a fraction of a second, then he nodded. “Yeah, easily bigger, and rougher than this on those Aussie beaches.”

“Which beaches were they?” Finn snapped, “Name me one.”

Brody widened his eyes, and his mouth bobbed open. He snapped it shut and rolled his shoulders. “I don’t have to prove myself to you, the only proof that I’m a great surfer is out there on those waves.”

Finn shook his head. “We all know you’re a great surfer, but don’t take unnecessary risks.”

“Surfing is all about risks, that’s what makes it so fun.”

Reece leaned forward, and Finn noticed he had a phone in his hand. By the angle and his smug smile, Finn suspected he was filming the exchange.

“Look you’ve had your fun, the sea will be calmer tomorrow.” Finn said.

“The calm is boring,” Emily said, earning a cheer from the rest of the group.

Reece bunched his lips together and shook his head. “No, it’s proof that you’re not letting Brody take on the waves.”

“We’re not physically holding him back,” Trent argued, “we’re just telling you it’s too dangerous to surf, put your ego aside.”

Trent pointed at the sea, but Brody didn’t look. He flashed a smile at Reece and the phone.

“They’re telling me it’s too dangerous. Making a decision for me, without knowing me. I know I can handle those waves. Watch me.”

The group cheered, and Brody began his triumphant strut down the beach. Trent and Finn shared an uneasy look, then Finn jogged down the beach after Brody. He heard Reece shout, and Trent yell but ignored them and caught up with Brody.

“Come on, that’s enough for today.”

“This isn’t about them, it’s about you and your safety.”

“Please Brody, I couldn’t bare it if something happened to you.”

Brody dropped his gaze to the sand and slowed his march. “Why?”

“It’s my job to look after people.”

Brody moved faster, and they strolled into the shallows of the sea. The water spat and sprayed up to Finn’s knees. It was biting cold, and he couldn’t stop his shiver.

“So, I’m nothing special then?”

“You said you wanted to know all of me.”

Finn nodded frantically. “Yes, I do.”

Brody slapped his hand on his board. “This is all of me.”

Finn gripped his arm and tugged him back. “Come on please.”

Brody stared at Finn’s hand curled around his forearm. “They’re expecting me to go in there.”

He flashed a look up. The cyan to his irises beamed with the backdrop of the grey swirling sea, and Finn pleaded for Brody to listen.

“It doesn’t matter,” Finn said, “you can say I threatened to call the police, or your parents, or someone.”

He turned at Trent’s shout. Reece was close by, filming the unfolding drama. He couldn’t drag Brody up the beach by force, he shouldn’t have even had hold of him. Finn released Brody’s arm, and pressed his hands together, begging Brody to listen.

“I’ll be fine, I’ve surfed in stormier seas than this.” 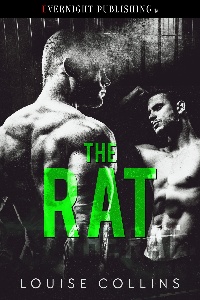 The Rat (MM)
Louise Collins
In Shelf
$4.99
Tweets by
sirenbookstrand