Delicious, gorgeous and a virgin, Carol embarks gleefully upon life at college. Her virginity lasts less than a week and shortly after she finds herself involved with handsome, chauvinistic Daniel. He wastes no time in showing her how he can use his lips and tongue to make her scream with delight, and how she can do the same for him. Then he sets himself the task over the semester, as he puts it, “to teach her every position in the Karma Sutra”.

They make a sexy wager, and Carol undertakes a journey that brings her more fun and sexual pleasure than she could ever have dreamed of. There are encounters with dishy, well-hung studs, a luscious session with Sophie,“I swing both ways”,who shows her how much satisfaction one woman can give another, the chance to introduce an innocent young guy to his first pussy and her first taste of sex in a group. And when she gets home, Daniel is going to have to obey her totally for twenty-four hours. Carol spends time thinking up just some of the very naughty things she will make him do, and she will do to him. 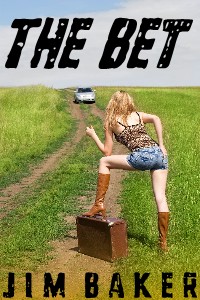 “The Great Race! Hitch lifts around Britain to raise cash!”

The idea was to hitch lifts around the country through specified towns, sending a postcard to prove you had been there, and getting friends to sponsor the number of miles travelled.

Daniel had a different idea.

“I bet I can travel further in five days than you can. We send a postcard from each town we visit. Start on Tuesday morning, and we must be back by mid-night on Saturday. The loser has to obey the winner in every way afterwards for twenty-four hours.”

Carol laughed. “You don’t have a chance. Let’s make it more interesting. You have to collect five pairs of girl’s panties, and I’ll get five pairs of men’s knickers. Each pair from a different person and no cheating and buying new ones.”

“You dirty-minded little bitch. I’ll have yours for starters then.”

She tried to run, but he was too quick. He grabbed her, carried her into bedroom and dropped her on the bed. He settled himself comfortably astride her waist, grinned down at her and began to unbutton her top. Very soon they were both stripped to the waist, and his jeans and underpants were pushed down around his ankles. He inched forward, settled his cock in the valley between her breasts and squeezed them around it.

“God, I love your tits,” he muttered, and began sliding the hot pole of flesh up and down between them.

Carol waited until his eyes began to glaze over, settled her weight on her elbows and twisted her whole body sideways as violently as she could. Taken by surprise, he sprawled across the bed. She jumped up, grabbed his balls and squeezed them hard enough to make him yell out in pain. He collapsed, gasping for breath.

She hauled his jeans away, grabbed his underpants and rubbed them in his face.

“Have mine for starters, would you?” she growled as she stalked out.

She got spanked again that night and then they fucked and sucked until even Daniel was defeated, and pleaded with her to let him sleep.