When Todd inherits his grandfather’s stately pile – Brockman Hall, he finds it comes with some surprising complications and additions.

First there is Scarlett – beautiful, wilful and harbouring a very long standing grudge against him.

Then there are Katie and Eliza. Who exactly are they and what were they doing living in the old place? What exactly had his grandfather been up to? And what had the girls been up to since his death?

And finally there is the old man’s gift to him of ‘The Bitch Strap’. Who had it been used on? Todd has to use all his ingenuity to defeat the wiles of the women ranged against him, to find out the answers to all the mysteries surrounding Brockmans and to assert his right to wield the strap! 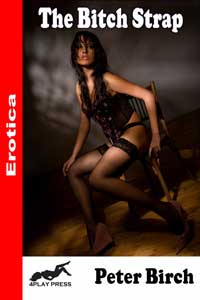 ‘Like I said, things seem to have got a bit mixed up,’ Todd said as she turned her back let him get at her bound wrists. ‘So you came on to my grandfather, not the other way around?’
‘Yes,’ she admitted, ‘and why not? I fell in love with the house the moment I saw it, and he was so stern, but kind too. I knew he liked to spank girls too, because of some of the books he had in his library.’
‘I used to read them constantly,’ Todd told her as the knot came loose.
‘Thank you,’ she said, shaking her wrists. ‘May I get dressed, please?’
‘Not yet, no. I like having you in the nude.’
She didn’t protest, which brought a smile to Todd’s lips as she went on.
‘He used to spank me, across his knee in front of the big fire in the living room, most often, or kneeling on a chair in the study. That was all, at first, but then he told me he used to spank the woman who used to cook for him, and other girls, and that they’d sometimes suck his cock as part of the punishment. He soon had me doing it too, which seemed only fair, and one night we ended up in bed and he invited me to move in.’
‘And Eliza?’
‘I knew her from one of the spanking forums I used to go on. She used to really like the whole British spanking thing and loved what I was doing, although she could never really handle the age gap and just liked to be beaten, by me more than by Alexander, and for sex.’
‘So she came over to be with you?’
‘We went to see her first. She was working in a shop in Memphis, selling BDSM gear. I’d always wanted to see the States, and Alexander used to say I’d given him a new lease of life. It didn’t last long.’
She hung her head, suddenly sad, and Todd hastened to try and cheer her up.
‘He had a good innings, Katie, and think how much brighter you made his last few years, especially if you were happy to have Eliza in a mÃ©nage-Ã -trois! Luck man, huh?’
‘It was more him and me and me and her, although she got punished all the time, and like I said, she’s a bit of a brat. That’s how we got the bitch strap. She pinched it from the shop she worked in on her last day. Alexander made her take twenty-four strokes with it, on the lawn in the nude, holding her ankles, but he didn’t send it back.’
‘He wasn’t exactly known for his high moral principles himself. So he painted me as the big bad wolf, did he?’
‘Yes. He said you were worse than him, that you’d done some terrible things and none of the family would speak to you. Did you really whip your cousin and make her suck you off in the old summerhouse?’