The Blue of her Hair, the Gold of her Eyes

Rachel's mysterious disease causes everyone, including her husband, to fear and reject her. Then her body starts to change in amazing ways. What will she ultimately become, and can she survive and find a new sense of identity amid the terror of her transformation? 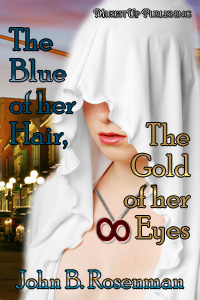 The Blue of her Hair, the Gold of her Eyes

The next day Rachel went to the pond at noon and waited an hour. Marney didn't show. The stares of others made her feel more alone than ever.

What would it have cost her to try to return Marney's affections? She and Marney shared a bond uniting them against the whole world. As for Frank, though part of her hated and despised him, another part would take him back in a minute. Still another part, the largest of all, had grown away from him forever because of his betrayal and what she had endured.

She decided to visit Marney. On impulse, she entered one of the park's gardens and picked a bunch of the white Narcissus Poeticus. Holding them, she headed for Main Street.

The address Marney had given her was forty blocks away, and since those with the disease were not permitted to use public transportation, she resigned herself to a long walk. Seeing a bus stop, she felt a surge of anger and a perverse temptation to break the law. Damn it, she was a citizen like anyone else. Didn't she have a right to take the bus, too?

Rachel held the flowers over the emblem on her breast, intensely aware of the Government complex across the street–towering steel buildings that chewed the sky. What if State Police saw her and got suspicious? Did she really want to take such a foolish chance? If caught, she would be locked up for good.

No police appeared, though, and within minutes, a bus marked MAIN STREET arrived.

She waited until several people got on before getting in line. At the last moment, realizing the risk she was taking, she tried to pull back, only to have people force her onward so hard she was unable to drop money in the collection box. Continuing forward, she decided to stand, holding a pole with one hand, the Narcissi over the necklace with the other.

People continued to get on, and the bus became packed.

They were all around her now—smug, complacent, and indifferent to her suffering. Remembering all she had been through, Rachel knew the passengers would view her only with horrified disgust.

Looking at them, she felt a wave of rage and power flow through her, starting at her feet and rising until her whole body thrummed and resonated like nothing she had ever felt before. It was, in fact, like being reborn, and the quiet, submissive woman she had been all her life was passing away even as she stood there.

An old woman saw it first. Rachel saw her eyes bulge and her complexion turn the color of spoiled cheese. A shriveled hand trembled, pointing at her.

A hundred eyes swung to the woman. Next, they darted to Rachel. For a long, long moment they all stared at her.

Screams. Curses. Faces livid and distorted by fear. Rachel smiled, thrumming with power as people pushed and trampled each other and the bus driver braked frantically. As the vehicle slowed, hysterical passengers drove themselves against the front and back doors. They smashed them open, and their bodies spilled into the street. Laughing, Rachel turned to a black teenager with a boom box who looked like he was trying to climb the wall. "Hey, Dude," she said, holding out her hand, "ya wanna touch me?"

Amid the melee, Rachel saw the driver rubberneck his head around and rise open-mouthed from his seat.

Clutching her flowers, she started toward him. While the bus was still half-filled, her progress was aided by everyone scrambling to get out of her way. One man smashed a window with his elbow and started to climb out.

Rachel reached the driver and raised her pendant so he could see it.

Five minutes later, the trembling driver stopped the bus. Rachel looked at the few passengers left huddled in back and started to get off. Smiling, she turned back.

"I'm sorry, it was so crowded when I boarded, I couldn't pay. How much do I owe you?"

Glassy-eyed, the driver wet his lips. "G…Get off."

She rummaged in her purse, finding no coins. Shrugging, she extracted a dollar bill and dropped it in the box. Raising her hand, she blew the man a kiss.
"Keep the change," she said. "The ride was worth it."