Jan-nell, a young healer and keeper of village lore, despairs of ever finding the child who will be the next bowdancer or a man worthy enough to love. When a village wedding is interrupted by four strangers, Jan-nell treats the injuries of one of them. The leader of these men, Bastin, is an arrogant, intelligent rogue who also is searching for an equal. His presence questions the bowdancer's life choice and stirs more than her mind. 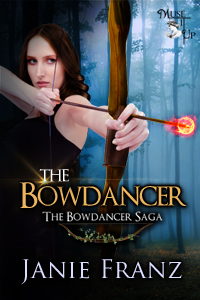 The arrow flamed in a yellow arc across the night sky, like a trailing star portending some great event. And in truth it did this night, the night of the Great Moon of Full Summer. This night the bowdancer’s arrow signaled a solemn rite and a village celebration—the union of Merin the tall horserider and Co-rell the blonde chosen-daughter of Wise Woman Dan-da-nell.

They were often seen among the white mares in the meadow. Merin’s own long hair flowed behind him as he raced to grab a handful of yellow-white horse mane nearly the same color as his own. He would swing himself upon a sleek back of one of the mares and come racing to scoop Co-rell high onto the horse with him, cradling her in his arms like a happy squealing child.

Jan-nell, the bowdancer, knocked the last burning signal arrow against her bowstring. She smiled as her mind composed the quatrains of an idyll to the horserider and his bride: white against white like playful doves, spirit folk.

When she released the arrow to call in the stragglers from the outlying farms, she shook her head and altered her imagery. No, not spirit folk, just sleek horses riding the meadows enjoying the fullness of coupling and sweet grass. But this young stallion and his mare would grace the village children’s tales and lessons. Jan-nell would see to that. Co-rell and Merin were the stuff of legends. She would gladly give the young ones a dream. They need not know that Merin could not speak a sentence without coloring the shade of a retiring sun and much preferred the silent movements of horses to men.

Jan-nell had spent too many early mornings drilling Merin in the wedding words he was to speak to Co-rell. There were only five short speeches, but they were impossible for him to remember, much less speak them to a woman. Finally, on this wedding morn, he had been able to say the words to Jan-nell without much stumbling. She did not know if he could repeat them at moon-rise to Co-rell.

Jan-nell frowned as she ducked into her solitary thatched hut some little distance from the village edge. She wondered why she remained with such simple wits. From a shelf above the stone fireplace she had laid with her own hands, she brought down a pot of scented oil and set it on the hearth to warm. Taking a small piece of cloth, she wiped the smoke from her large bow.

Dan-da-nell, who had been bowdancer before her, possessed a bow as tall as Merin, covered with painted symbols. Every time the woman oiled it, she had to repaint her totems, changing them carefully with the seasons and her whim. Dan-da-nell said the bowdancer should never be rigid or static but supple like her well-oiled bow, willing to bend with the tension of a tightened bowstring and able to sing back into the shape the One had created for her.

Jan-nell had learned it was better to cut a sturdy wood and oil it well than spend time with painting totems on her bow. As she dipped her fingers into the warm brown oil and rubbed it into the smooth wood, pride filled her. The bow wood glowed under her ministrations. Every bit as big as Dan-da-nell’s bow and far taller than herself, it could never be used in war or hunting. And that was just as well. It was a symbol, an emblem of her life, useful only as a ceremonial object—to herald festival nights, to dance the sacred dances. When she stuck its arrow-pointed end into the dust at the village center or by the riverbank and sang the Call of Learning, the children knew its meaning and gathered eagerly with awe-struck eyes to listen to the stories the bowdancer told. As she taught in story, in rhyme and song, she took them into ages past, reliving the days of those who had led and inspired the village then. She brought them tales of meadow animals and birds, deeper mysteries beneath the river waters and in the sky. The night sky was a familiar embroidered blanket to her; she delighted in telling and retelling the names and patterns of its starry stitches.