The Boy Who Delivered the Wind

Little Sammy needs ten thousand dollars, and fast, if he is to save his home from foreclosure and his family from catastrophe. Russ befriends the lonely boy, and soon the two embark on a series of adventures that reveal the sorry underbelly of humanity and the glorious mysteries of nature. 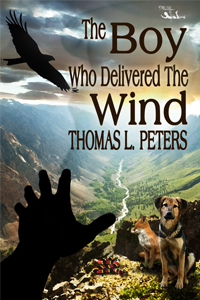 The Boy Who Delivered the Wind

Once in a while an author comes along who can really tell a tale. Thomas L. Peters reminds me of Mark Twain in his telling of this lovely story of two young boys and all the trouble they get in during the end of their school year and the beginning of summer. Russel is a total character who perceives the world with a great simplicity. I loved his parents and their idiosyncrasies. His buddy Sammy is a real precocious lad, who talks to the trees and the wind and has the most bizarre family you can ever imagine. The descriptions and dialogue are pure gold. The story will linger on in your heart. A truly beautiful story for all ages. Lynne Murray

He lived a couple miles away from me in an old beat up two-story wooden house with thick moss growing all over the roof and most of the windows taped over where kids had thrown rocks through. Mom said the house hadn’t been painted in thirty years and was lived in by a bunch of hillbillies, who’d run out on the highway every New Year’s Eve hollering and banging their pots and pans until they got tired and passed out on somebody’s front lawn. I didn’t figure the kid’s family had enough money to buy him one of those fancy wireless gadgets and decided that he must be crazy.

I trampled my way through the bushes, making all kinds of noise to warn the kid I was coming, so he wouldn’t jump out of his skin when he saw me and maybe soil himself. I didn’t have anything against crazy hillbillies so long as they didn’t bother me, but he just kept sitting there talking to himself and patting that little flower like it was a dog.

I couldn’t make out what he was saying, but I didn’t think it mattered much. The kid was so skinny that even though his shorts were tied on tight around his waist with a yard or two of clothes line rope, they still looked like they were about to slide right off him. He had on a gray T-shirt that was all ripped to near shreds under his arm pits, and he wasn’t wearing any shoes either. I sometimes wished I could wander around the woods barefoot, but Mom always said I’d step on a rusty nail and die of lockjaw or something.

When I got over beside him, I jabbed my fingers into his shoulder, which was more bone and gristle than anything, and he finally whirled around and looked up at me. He had round, wide blue eyes that sort of sucked the wind right out of my lungs for a second. His face was pasty and white and the skin along his cheeks was so flat and stretched out that it seemed barely able to hold the bones in. He had a squeaky voice, too, that kind of sliced through me until I got used to it.

“Who are you talking to?” I asked him. “You want people to think you’re nuts or something?”

He puckered his pale little mouth at me and started biting his lips until they got so fiery red that I couldn’t tell if they were bleeding or not.

“I ain’t nuts, and I ain’t talking to you or no other human being. I’m talking to these here flowers. I felt sorry for ‘em sitting out here all alone at night and I thought I’d cheer ‘em up. They’re always grateful getting talked to and fussed over. They ain’t like people.”

When I heard that he talked to plants, I started right away howling and laughing and rolling my eyes. And all the while the kid’s mouth puckered up at me even more and his eyes got bluer and brighter, so that pretty soon it seemed like I was staring into some dazzling neon sign, like the one over the bar where my dad went after work sometimes. I even put my hand over my eyes once or twice to ward off the glare. The sun was out strong that afternoon, but it was like a dying candle compared to that little runt’s blue shining eyes.

Finally his mouth slackened a little, and his forehead wrinkled up like he was thinking hard.

“Go on and have your fun, you big jerk,” he snapped at me. “I know right well that these little flowers can hear me, ‘cause every time I come by, they start waving back and forth like they’re excited to see me. I talk to ‘em all the time. I talk to the trees, too, ‘cause their branches are always swaying when I’m around. Sometimes I wave up at them, and they start swaying even more. So don’t tell me what’s going on. I know what I see.”

It took me a while to settle down from all my laughing. I even started watering a little in the eyes and had to bend over a few times to keep my stomach from cramping. Maybe I played it a bit too far and got carried away with myself, because my laugh got strained right at the end, almost like I was getting a sore throat. I didn’t see any harm in making a little fun of him though. It wasn’t as if I was smacking him across his prickly little jaw. And the kid had no right calling me a big jerk either. But I figured he was simple and didn’t know any better and decided to let it slide for the time being.

“The branches and flowers are swaying back and forth because the wind is blowing them around,” I told him, pointing up at the sky and the clouds starting to roll by. “Don’t you know anything?”

All of a sudden the kid jumped right up and stuck out his bony chin at me like he was getting ready to take a swing. But I wasn’t worried. He barely came up to my belly button when he was stretching himself out as tall as he could. I still took a step back though, just to be on the safe side. He might have been hiding a sharp rock in those baggy pockets of his, or maybe he had a knife with him. Mom said the whole family was nothing but a bunch of rabble rousers and drunks, and cutthroats and thieves.
“And how come the wind is blowing?” he snapped, his blue eyes flashing. “Answer me that, you big dope.”