The Calling of Mike Malone

In his early twenties, Mike Malone is already successful. He has a loving girlfriend, a stellar future…and a father he thought long dead. But now, Dad is back. He has revealed himself to be a fallen angel and insists Mike become his very own anti-Christ. When Mike refuses Dad is not happy and all hell, literally, breaks loose. 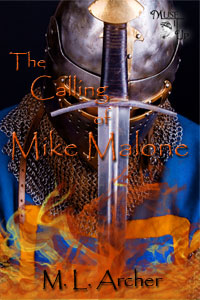 The Calling of Mike Malone

Mike glanced around. Tough guys, men who knew how to lie and steal, murderers—all were trying to hide in their very exposed cells. If the situation weren’t so desperate, he might have laughed.

In a nearby cell he spotted a Bible. “Toss me that Bible!” he yelled at one of the inmates.

A guy with a ratty ski cap on his head stared at him before shakily muttering, “Uh, yeah, B-B-Bible.” Dangling it between two fingers as if it would bite him, he flung the book to Mike. “Keep it.”

Mike looked at the tattered book in his hand and said quietly, “Father God, give me my sword.” In his hand, the Bible grew into a long, razor sharp weapon. He stepped forward.

“I’ve come to get you, Mike,” Nieth, the huge lizard-creature growled. His oily snake-like head sat atop a long, black, muscular body that measured fifteen feet from head to tail. He reared up and raised his front claws. They looked capable of ripping a man open with a single swipe. His elongated jaw held rows of horrible teeth, and his undulating tail twitched behind him like an anxious viper. “If you don’t come with me, I will rip off your arm. Come to me. Come.”

“Yeah? Did my loving father send you?”

The horrible creature slithered forward, and then, right before his eyes, it began to change. The monster’s body shrank, the reptilian scales fell away, the tail melted, he stood straighter, his face became like liquid before morphing into a human shape; his form became that of a tall human man with white-blond hair.

Mike cried out. His sword suddenly felt like lead in his hands. He heard the sound of blood rushing in his ears. The creature was his father! His father was the creature. Ahiel stared at him with mad, fiery eyes and grinned. “Hi, son,” he said. “Like it?”

Mike could barely breathe as his mind fought to comprehend this new horror. That was my father. My father?

He remembered Wisdom asking him if he knew about Ahiel’s true form and how he had wondered what she meant by that. He had to shake himself and recognize this surprise for what it was—one more attempt to knock him off balance and gain control. Not this time. He gritted his teeth, lifted his sword, and with a great cry, ran towards Ahiel. As he did, his shirt transformed into a breast plate and coat of mail, his legs and feet were covered in armor, a helmet appeared on his head, and in his other hand he now gripped a magnificent shield.

The armor of God!

Suddenly, his father became bathed in a near blinding light, and although Mike cried out against its brilliance, he continued his charge.

Clang! Metal clashed with metal. The light around Ahiel faded just enough for Mike to see that his father was also dressed in the gleaming armor of a warrior angel.

“Like it, son?” Ahiel taunted. “I can make my armor look just like yours! Remember when we played swords back when you were a kid? C’mon, take me if you can, brat.”

Their swords connected, and for the first time, Mike felt his father’s full strength. The man could have battled fifty men with no trouble.

God, don’t let him pound me into the ground!

Ahiel administered a blow to Mike’s shield that sent him flying backward.

“I will free anyone who gets on their knees and calls me God!” He roared and the walls shook with his fury.

Instantly, dozens of men were on their knees at the doors of their cells shrieking, “God…You’re god!”

“You people are crazy!” one man called. “You’ll burn for that. Yer gonna burn.”

“You first,” Ahiel yelled, gestured, and immediately the man burst into flames. The man’s screams, and the wretched scent of burning flesh, filled the air.

“Heal him!” Mike heard himself shout above the sound. “Save that man. Stop the flames.”

The fire stopped, but the madness in the cells grew by leaps and bounds. Men began slamming into their cell walls, trying to climb the bars, and screaming brutal obscenities. Some busied themselves pulverizing the prison staff. Mike could feel confusion and fear in the air like a fog.

Ahiel raised his arms in glory. “Like it, Mike? These small bits of heaven really entertain me.”

“Leave them alone. You said you came to get me. What’s wrong? You getting old, Ahiel, or are you afraid?”

His father stopped, a black anger roiling in his eyes. “I’ll do better than leave them alone. I’m going to set them free.”

There was a loud clang and every cell door snapped open. Men began pouring into the corridor, crowding, fighting mindlessly. Some of them were clearly under demonic power, crawling on all fours, or moving like insects up and down the walls.

Mike raced back to Pastor Wicker’s cell and popped the door open.

“I have to leave now!” Mike exclaimed.

Mike stepped into the pastor’s cell, slammed the door shut, and locked it. He raised his sword and whispered, “God, please give me the portal.”

Instantly, it shimmered in the cell and Pastor Wicker stepped back, smiling.

“You’re going to win, son,” the pastor said. “Go get Linda.”
Mike nodded and, concentrating on the one place he needed to be more than any other, took a deep breath and stepped forward.