The Captain and the Countess

Why does heart-rending pain lurk in the back of the wealthy Countess of Sinclair’s eyes?

Captain Howard’s life changes forever from the moment he meets Kate, the intriguing Countess, and resolves to banish her pain.

Although the air sizzles when widowed Kate, victim of an abusive marriage, meets Edward Howard, a captain in Queen Anne’s navy, she has no intention of ever marrying again.

However, when Kate becomes better acquainted with the Captain she realises he is the only man who understands her grief and can help her to untangle her past. 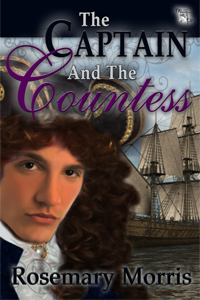 The Captain and the Countess

The Countess of Sinclair’s cool blue eyes were speculative.

Captain Edward Howard gazed without blinking at the acclaimed beauty, whose sobriquet was “The Fatal Widow”’.

Did she have the devil-may-care attitude gossips attributed to her? If she did, it explained why some respectable members of society shunned her.

The lady’s fair charms did not entirely explain what drew many gallants to her side.

He advanced toward her, conscious of the sound of his footsteps on the wooden floor, the muted noise of coaches and drays through the closed windows and, from the fireplace, the crackle of burning logs which relieved the chill of early spring.

Her ladyship scrutinised him. Did she approve of his appearance? A smile curved her heart-shaped mouth.

“How do you do, sir,” she said when he stood before her. “I think we have not met previously.” Her eyes assessed him dispassionately. “My name is Sinclair, Katherine Sinclair. I dislike formality. You may call me Kate.”

“Captain Howard at your service, Countess.” Shocked but amused by boldness more suited to a tavern wench than a great lady, Edward paid homage with a low bow before he spoke again. “Despite your permission, I am not presumptuous enough to call you Kate.”

“You seem gallant, sir, but you are young to have achieved so high a rank in Her Majesty’s navy.”

“An unexpected promotion earned in battle.”

“You are to be congratulated on what, I can only assume, were acts of bravery.”

The depths of her ladyship’s sapphire cross and earrings blazed, matching his sudden fierce desire.

Kate looked up at him.

He leaned forward. The customary greeting of a kiss on her lips lingered longer than etiquette dictated. Her eyes widened before she permitted him to lead her across the room to the sopha on which his godmother sat next to Mistress Martyn.

With a hint of amusement in her eyes, Kate regarded Mrs Radcliffe. “My apologies, madam, I suspect my visit is untimely.”

Her melodious voice sent shivers up and down his spine, nevertheless, Edward laughed. Had the countess guessed his godmother, who enjoyed match-making, wanted him to marry Mistress Martyn?

“You are most welcome, Lady Sinclair. Please take a seat and partake of a glass of cherry ratafia.” Frances said.

“Captain, you read my mind. Sweet wine is not to my taste.”

In response to the lady’s provocative smile, heat seared his cheeks.

Kate smoothed the gleaming folds of her turquoise blue silk gown. The lady knew how to dress to make the utmost of her natural beauty. Her gown relied for effect on simple design and fine fabrics. Later, he would sketch her from memory.

Kate inclined her head to his godmother. “Will you not warn your godson I am unsound, wild, and a bad influence on the young?”

Edward gazed into Kate’s eyes. Before his demise, had her husband banished her to a manor deep in the country? If it were true, why had he done so?

Kate’s eyebrows slanted down at the inner corners. She stared back at him. He laughed, raised her hands to his lips, and kissed each in turn. “I look forward to furthering my acquaintance with you.”

What did he care if she were some ten years his elder? He wanted to get to know her better. Edward bowed. “Your slightest wish is my command.”

When they sat side-by-side opposite Mrs Radcliffe, although Kate smiled at him, the expression in her large blue eyes remained cool. “Tomorrow, please join those who visit me daily at my morning levee.”

“I fear my voice would be lost among many, thus casting me into obscurity,” Edward replied, much amused.

“I don’t take you for one to be ignored. However, I respect your wishes. Besides those who seek my patronage, there are many gentlemen eager to wait on me. ’Tis more than my porter’s life is worth to deny them entry.” She looked at his godmother. “Mrs Radcliffe, do you not agree it is pleasant to lie abed in the morning while indulging in conversation with one’s admirers?”

Frances toyed with her fan. “It does help to pass the time.”

Kate turned her attention to Edward. “I have no doubt you would become a cherished member of the group of those who seek my favour.”

“Countess, life at sea teaches a man to be wary of enemies, not to compete with them. I am not a flirt who is given to haunting ladies’ bedchambers.”

“If I seclude myself with you tomorrow morning, may I have the pleasure of your company?”

“Alone with you in your bedchamber? How improper. Are you always so careless of your reputation?” he asked, with a hint of laughter in his voice.

Her eyes widened. “I have no reputation to guard, Captain.” She had spoken in a forward manner he was unaccustomed to in polite society.

“Have you not?” Edward needed a plunge in icy water.

A frozen glimpse of despair deep in her eyes unsettled him. Did he imagine it? He could not speak. Why should a lady like the countess despair?

He recovered his voice. “If it is your custom to take the air in The Mall, I shall be pleased to be your sole escort.”

Kate fidgeted with a diamond buckle. “Are the battle lines drawn?”

“Don’t confuse battle lines with a mere skirmish at sea.” His voice hinted at the chuckle he restrained.

“There are those who would welcome an invitation to a tête-à-tête with me.”

He preferred to take the lead in affairs of the heart. “Perhaps I am not one of them. Maybe I would like to be your friend.”

“My friend? Is that all you want of me?”

Kate laughed. “No, I thought not.”