Keir Moreau, a middle school teacher living a solitary life, is excited to welcome a handsome new neighbor. But after their first meeting goes alarmingly wrong, Keir decides it's safer to keep his distance. Besides, he has to focus all his attention on finding help for a student who is being forced into conversion therapy.

Riley Quinn used to be an award-winning photojournalist, roaming the world and exposing corruption. An injury put an end to all that. Now he's frustrated with his new aimless life, wondering if he'll ever do anything again that really matters. When he first meets Keir, a case of mistaken identity leads him to mistreat his intriguing new neighbor. Riley tries again and again to redeem himself, but everything he does seems to push Keir farther away.

Keir, obsessing about his failure to help his student and fighting his stubborn attraction to Riley, takes a reckless gamble that goes dreadfully wrong. Or does it? Can an act of desperation open the door to romance? 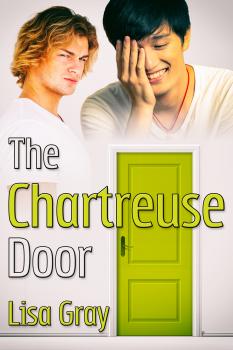 Keir tightened his grip on the welcome packet and the cooler containing his homemade tandoori chicken dinner. Arranging a smile on his face to mask his nervousness, he climbed the three steps to the new guy's condo. The front door was still propped wide open, so he cautiously stuck his head in and peeked around. The floor plan looked like a mirror image of his own condo, including the long shadowy hallway leading to the stairs to the second floor.

There was no table in the hallway, so Keir set the cooler and the welcome packet on a crate near the door. A framed photo lay at the base of the crate, an inviting image smiling up at him. Keir released a heavy sigh. What a beautiful young man -- just the type who'd be the new guy's boyfriend. Any budding fantasies of finding a potential lover withered. No surprise there. But maybe friendship was still possible.

Keir took two steps farther and stopped when his foot connected with another frame, this one lying face down. Unable to resist, he picked up the photo. A second beautiful young man. Keir studied the portrait. The looks were nearly identical to the first one, but it wasn't the same person. So, his new neighbor had a type. One that Keir, with his skinny body and blotched face, would never satisfy.

With eyes now adjusted to the gloom, he could see a whole collection of photos strewn in a jumble across the hall. Just how many boyfriends did this guy have? And how could anyone be so cavalier about dumping their pictures on the floor? Keir's eyes followed the trail of seductive images to the bottom of the staircase.

Sprawled on the bottom steps was the new neighbor.

In an instant, the blood drained from Keir's face. Cringing at how pathetic it was to get caught snooping before he'd even introduced himself, he lay the photo on the floor with care and struggled to dredge up an apology. But the words stalled in his throat. The man on the stairs was asleep. Thank God. A chance to avoid being judged a total idiot, at least not quite so soon.

He paused to indulge in a few moments of watching the handsome man's quiet, even breathing. The magnificent body was just as beautiful as it had appeared from across the street. But close up, the "god" looked a lot more human with deep lines of exhaustion marring his face.

Keir was seized with an urge to soothe those lines. If nothing else, the chicken tandoori offering should be welcome. Anyone too tired to even close his front door should appreciate a hot, home-cooked meal.

He cleared his throat, hoping to catch the man's attention without startling him.

It worked. Those eyes (oh, yes, a brilliant shade of blue even the shadows couldn't diminish) opened and struggled to focus.

With as friendly a smile as he could manage, Keir took a step forward and extended a hand. "Hi, I'm here to talk to you about --"

"It's about damned time you got here," the man growled.

Reacting on instinct to that gruff voice, Keir jerked his hand back and froze. Had the man expected to be welcomed the moment the moving van left? "Look, I'm sorry --"

"Sorry? Damned straight you're sorry! Did you bring the paperwork?"

How did the guy know about that? Wondering if he'd be allowed to complete a sentence on his third try, Keir gestured to the welcome packet on the crate. "Everything you need is over there."

"Good. Now take this piece of shit and get out."

Keir leaped backwards as the seated man shoved a hand truck clattering across the floor, coming close to hitting him. Was the guy attacking? He bit his lower lip as he tried to decide what to do. Okay, the crazy person wanted him to take the hand truck. And do what with it? That question almost escaped Keir's lips, but the hard look in the eyes of the scary new neighbor didn't invite discussion. Fearful of re-igniting that temper in such an intimidating man, Keir chose discretion over valor.

Keeping watchful eyes on the irate man, Keir grasped the hand truck by its handle, backed up until he reached the door, and without another word made his escape. After he leaned the hand truck against the hedge next to the steps, he hurried across the street. Brusque? That's what Mrs. Prendergast had called this guy? How about irrational? Unpredictable? Or maybe just plain nuts?

If that woman ever asked him to do the welcome wagon thing again, he vowed he'd be permanently unavailable.