Sequel to The Colony Book 1: Rebellion

The only way sixteen-year-old Aine and his true Other Kyer can be together is to escape the Colony with its Code, its pills, and its constant monitoring. Breaking out of the Colony was hard enough, but living outside of its protective walls proves to be even harder.

The boys have been raised to believe all life outside the Colony was destroyed by the last war. However, Aine soon discovers this is a lie. On their first day of freedom, they meet Sinda, a girl their own age who has grown up in the harsh new world outside the Colony. In return for some food, she agrees to help them out and leads them underground, where people must live to avoid predators, acid rain, and disease.

It doesn’t take long for Aine to tire of living hand to mouth. He misses the comforts of his bed, his friends, and his family. Why should he be the one to run away? He and the boy he loves have done nothing wrong.

Aine is destined to be the next Overseer, so why can’t he return to the Colony and start a revolution to change the way things are run? Why can’t people love who they want to, rather than who they’re told to? Why can’t they think for themselves, and live as they want?

When he receives a message from Brin that she, too, has stopped taking her pills, Aine realizes he isn’t the only one unhappy with the Code. If he and Kyer return, maybe they can enlist their friends’ help to bring about some much-needed changes.

But breaking back in proves even harder than breaking out. They must dodge the Officers, evade the Monitors, and convince a drug-controlled Colony it deserves better. But will anyone listen to them? Or will they be caught and medicated back into compliance? 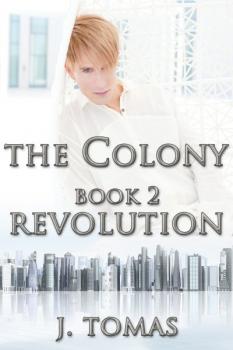 More From The Colony 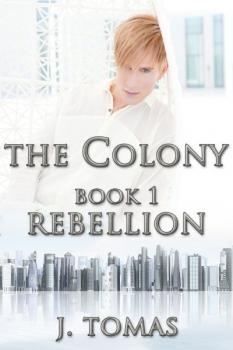 When I opened one eye and saw Kyer sprawled on his back a few feet away from me, I felt a surge of relief spike through me. I was right, I knew I’d be, because he was still with me, by my side. My chest swelled with emotion, and I blinked back sudden tears. We had made it. We were free.

Movement in front of me caught my attention and I focused my gaze closer in, on the sand. There, an almost invisible creature moved with odd grace despite numerous legs. It was a bug of some kind, fragile and perfect, and the first living thing other than a person that I had ever seen.

I watched, fascinated, as it crawled over grains of sand that stood in its path like boulders. This close, I could see beady black eyes, and as it moved, I imagined I could feel its multiple legs skittering over my skin. Just seeing it navigate closer to me made my arms and legs begin to itch. With difficulty, I rolled onto my side and absently scratched my wrist where the Colony had implanted an identification tag before I was born.

The creature moved on, steady and true. I scratched my wrist again, then turned my head to glance at the spot. My neck protested the movement, and pain behind my right eye blossomed into a dull ache.

My wrist was an angry red. My nails had made white claw marks across the skin, and there, at the base of my thumb, a welt swelled like some sort of bite.

Suddenly I felt tiny legs all over my body and, headache be damned, I scrambled to my feet. With shaking arms, I pulled my tunic off over my head and looked at my thin chest. The pale skin was pocked with bites, and those little invisible creatures who had looked so magical a moment ago were crawling all over me!

“Oh, shit!” I slapped at my bare chest, trying to rid myself of the parasites. More bit me -- I could feel the stings now, the sharp little pricks of whatever they had that passed for teeth, and I danced as I tried to knock them away. My legs tingled, too, so I stripped off my pants and fell over on my side as I kicked off my shoes.

Beside me, Kyer stirred. Sand crusted his hair, turning the blond curls a shade of white, and he had an ignoble smear of sand caked to the side of his face. He saw me in my underpants, slapping at my arms and legs, and he grinned sleepily. “I had a dream you were getting undressed. What are all those red bumps on you?”

“Bites!” Standing, I shook my underpants to free them of any insects, as well, but I still felt as if the bugs crawled all over me. “I’m covered in them. They’re probably all over you, too.”

With a jerk, Kyer sat up and slapped at his tunic, then tugged it over his head. He took a quick glance at his bare chest and yelped. “What the hell?”
I didn’t bother answering. I dashed for the rolling waves, hoping maybe the water would wash away the last of the parasites and erase the phantom legs I felt all over my arms and legs.

Rolling onto his back in the sand, Kyer raised his legs in the air and pulled off his pants, then kicked away his shoes as he raced to join me.

The water was cold and bracing, and soothed my skin instantly. I walked out to just beyond the breakers, then ducked down until my shoulders were completely covered. I dipped my head into the water, and when I raised it again, Kyer was splashing towards me. I wiped water from my eyes.

He dove under and swam the rest of the way. When he came up, he was right beside me, and he gave me a quick kiss. Water spiked his eyelashes into angles and tightened his curls. “You taste salty,” he said, licking his lips.

I felt his hands play over my chest under the water and let him draw me close. “This is just one more thing they lied to us about,” I said. “They always told us we were the only things left alive after the last war.”

“If those things are what’s left,” Kyer admitted, “I’d rather we were alone.”