This box set combines both books in J. Tomas's successful gay dystopian YA romance, The Colony:

Sixteen year old Aine lives in the Colony, and his whole life was decided before he was born. In two years he will marry the girl next door, Brin, who was assigned as his Other at birth. Then he will be given a position in the Colony's workforce that best suits his talents. Each night he takes four pills, like everyone else in the Colony, and he knows the pills keep them safe and their world in order.

Everything is fine. Perfect, in fact. Until Aine accidentally drops one of his pills.

Terrified, he tries to hide the mistake, but when he dreams for the first time in his life, he discovers all he's been missing. What scares him more than not taking the pill, though, is how alive his dreams make him feel. Because it isn't Brin he dreams of but his best friend Kyer.

Suddenly Aine's world turns upside down, and he doesn't know what to think or who to trust. All he knows for sure is he's falling in love with Kyer, which is forbidden by the Colony's Code, and he will do anything to protect their budding relationship.

The only way sixteen-year-old Aine and his true Other Kyer can be together is to escape the Colony with its Code, its pills, and its constant monitoring. Breaking out of the Colony was hard enough, but living outside of its protective walls proves to be even harder.

The boys have been raised to believe all life outside the Colony was destroyed by the last war. However, Aine soon discovers this is a lie. On their first day of freedom, they meet Sinda, a girl their own age who has grown up in the harsh new world outside the Colony. In return for some food, she agrees to help them out and leads them underground, where people must live to avoid predators, acid rain, and disease.

It doesn’t take long for Aine to tire of living hand to mouth. He misses the comforts of his bed, his friends, and his family. Why should he be the one to run away? He and the boy he loves have done nothing wrong.

Aine is destined to be the next Overseer, so why can’t he return to the Colony and start a revolution to change the way things are run? Why can’t people love who they want to, rather than who they’re told to? Why can’t they think for themselves, and live as they want?

When he receives a message from Brin that she, too, has stopped taking her pills, Aine realizes he isn’t the only one unhappy with the Code. If he and Kyer return, maybe they can enlist their friends’ help to bring about some much-needed changes.

But breaking back in proves even harder than breaking out. They must dodge the Officers, evade the Monitors, and convince a drug-controlled Colony it deserves better. But will anyone listen to them? Or will they be caught and medicated back into compliance? 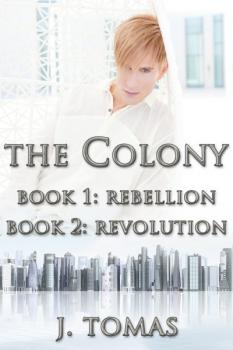 Every One had an Other. We were crafted together, birthed at the same time, two halves of one Whole. Everything I was not, she was. Everything she lacked, I had. Others assured we would never be alone. Since the first Colony, Others had worked together to create everything we held dear.

Including the pills, of course.

Brin was my Other. Each year, the Birthing Committee selected twenty-six embryos from stasis to be born. Thirteen boys, thirteen girls, twinned and tweaked to perfection. The entire Colony celebrated the births, and more couples applied to become parents than would be able to receive the children. The babies were born in the Birthing Center and nurtured there for three months by Birthers, workers whose sole purpose was to raise and feed and clothe the newborns. After this initial period, the babies were given new homes. Families could only receive a total of two children -- one of each gender. This allowed everyone in the Colony the opportunity to become parents.

The year I turned eleven, my mother and father petitioned the Committee for another child. They received a daughter, my sister Evie, a year later. She would be the last child my parents were allowed to raise.

There was no such thing as natural birth in the Colony.

We learned about it in class, and why it had been such a dangerous practice. Too many children born too quickly, to parents unable or unwilling to care for them. Diseases spread through sexual interactions. Mothers dying in childbirth, children born with defects, a whole gamut of reasons our system was better.

In the Colony, women and men donated their genes to future generations. The best traits were passed on, and families created through blending the Whole. Everyone who wanted a child could petition to receive one, and those who would rather focus on other talents didn’t have to be burdened with parenthood. It was all coded in our genes. If someone wanted a child, then his or her Other would want to raise a family, as well. If someone was better suited for long hours working for the Whole, the Other was, too.

Everyone was happy in the Colony. They had to be.

We took pills for it.

The morning after the incident with my blue pill, I woke on my own, feeling refreshed. Usually the screen above my door clicked on with a soft chime that sounded every few seconds, growing louder as the light in the room brightened, drawing me from sleep.

But I was up before the chime began, my eyes open a full minute before the light brightened in response. I snuggled in the sheets for a moment, remembering the feel of Kyer’s hand on my knee, my thigh. If I’d stayed asleep a little longer, where exactly would his hand have ended up?

A delicious shiver tickled through me at the thought. I couldn’t wait to tell him about the dream.

No, I couldn’t. No one could know. Then they would know I didn’t take the blue pill, and it’d get back to the Health Center, and I’d be detained.

The dream was my little secret.

I had another minute to myself before the screen clicked to life. Someone stared into my room, a woman older than me but not quite as old as my mother. A Monitor, someone whose job it was to watch over everyone through the consoles in the Monitor Center.

“Good morning, A-4602,” she said, her voice pleasant but neutral. It was just another morning at work for her. She tapped the headset holding back strawberry-colored curls and I heard the sound loudly through the speakers built into the wall. “Did you sleep well?”

She knows. I threw back the covers and draped my legs over the side of the bed, sitting up. My left foot covered the spot where I thought I had smashed the blue pill the night before.

The look on her face suggested otherwise. If I were fine, I’d still be asleep, and the chimes would have to wake me up.

She typed on a keyboard just out of sight, then nodded. “Please stand with your arms out so I can run a bioscan.”

I did as she asked. Would a bioscan show I hadn’t taken all my pills? Would I be found out before I even had a chance to savor this new freedom? Would I be detained after all?

The bioscan was painless. A thin slit in the wall lit up with a red light that circled my bedroom, then a laser scanned me from head to toe. I kept my face blank and held my breath. Please, I thought, not sure exactly who I might be pleading with. The Monitor, maybe? The Colony itself?

The memory of Kyer’s hand on my leg seared into my mind. Please. Don’t notice. Let me keep this.