The Darker Side of Henry VIII - by His Queens

Channelling their own words through the author, each of Henry VIII’s Queens takes it in turn to portray the King in a somewhat different light to what you may have already heard or read.

From Katherine to Katherine – the ladies have their say about Henry: the lies, the facts, the reality of being Queen of England and consort to His Majesty King Henry VIII.

Author Dorothy Davies is a well-known and respected Medium, who has channelled the words of many characters – some famous, some not so. In this, her latest work, we garner refreshing insights into the life in the Court of King Henry VIII and the fates of those unlucky enough to have fallen in love (or into bed) with him! 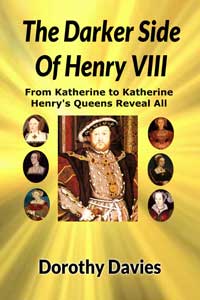 The Darker Side of Henry VIII - by His Queens

From Katherine to Katherine – the ladies have their say about Henry:
the lies, the facts, the reality of being Queen of England and consort to
His Majesty King Henry VIII.

“I have no fear but when you heard that our Prince, now Henry the Eighth, whom we may call our Octavius, had succeeded to his father's throne, all your melancholy left you at once. What may you not promise yourself from a Prince with whose extraordinary and almost Divine character you are acquainted? When you know what a hero he now shows himself, how wisely he behaves, what a lover he is of justice and goodness, what affection he bears to the learned I will venture to swear that you will need no wings to make you fly to behold this new and auspicious star. If you could see how all the world here is rejoicing in the possession of so great a Prince, how his life is all their desire, you could not contain your tears for joy. The heavens laugh, the earth exults, all things are full of milk, of honey, of nectar! Avarice is expelled the country. Liberality scatters wealth with bounteous hand. Our King does not desire gold or gems or precious metals, but virtue, glory, immortality.”
Lord Mountjoy to Erasmus, 1509

It follows that the one thing we should not do to the men and women of past time, and particularly if they ghost through to us as larger than life, is to take them out of their historical contexts. To do so is to run the risk of turning them into monsters, whom we can denounce for our (frequently political) motives—an insidious game, because we are condemning in their make-up that which is likely to belong to a whole social world, the world that helped to fashion them and that is deviously reflected or distorted in them. Censure of this sort is the work of petty moralists and propagandists, not historians.
Lauro Martines, Fire in the City: Savonarola and the Struggle for Renaissance Florence

This book is dedicated with many thanks and considerable affection to Henry’s queens for sharing their secrets and opinions with me. It is also dedicated to Henry VIII, King of England, Supreme Head of the Church of England, Fidei Defensor or Defender of the Faith.

And to Terry Wakelin, my rock and anchor, who passed to spirit during the writing of this book. He, like Henry, lived life to the full and he, like Henry, has left a huge hole in many lives, especially mine.

I know well this is a book which gives Henry’s queens a chance to talk about Henry as if he were not there. I also know well he is supervising; reading over the shoulder of the channel but that makes no difference to the words I will give. I apologise to the reader for taking time to talk of my first husband, but if I did not set it down plainly, my statement that I was virgin when I went to Henry would not be something they could understand and accept. It is my hope, my wish; my prayer that they will accept it, for it was and is the basis of my stance that I was Henry’s lawful wife. In turn, that was the basis of one of the major problems to torment Henry’s life. The choice of his second queen was the basis of the major problem to torment Henry’s life. And so, much as we wish to talk of the king himself, of necessity what happened to us and how we reacted has to come into it, to make sense of all that is written in your history books – mostly falsely but then the historians did not and do not have the advantage of talking to the people who lived the life. I believe it is called primary sources.
The primary sources here are the queens themselves.
Herein lies the truth about the reign of Henry VIII as told by his six wives. Herein is the man at the centre of the many controversies and tyrannies, let us not blind ourselves to his nature, who took England in a new religious direction which in itself caused even more problems, ones he - for once - did not foresee.
In truth, it is women who were Henry’s ‘downfall’ and two women, both resulting from his loins, who tormented England with their religious beliefs when he was no longer there. Mary took the land in one direction, Elizabeth reversed it and chaos ensued, whilst Henry, in the realms, raged impotently at his inability to do anything about it. But England survived as a Protestant country and, some would say, was the better for it. Certainly it made England different and that was ever Henry’s intention. England stood proud in his time and it has many times since.

Henry Tudor, the great king, is seen by many as the overweight red-faced man depicted so accurately by Hans Holbein. They forget, or cannot accept, that long before the portrait was painted Henry was first a youth, then a young prince, then a young king. He was charming and handsome, someone who attracted women as if he was made of honey and they were all worker bees buzzing around him. He had everything you would now call charisma, you would have fallen over yourselves to see him and talk with him, just as you do your celebrities and movie stars now.
This is the man at the centre of this book, the man at the centre of all our lives, often our hearts, too. I have sympathy for those for whom he was not the centre of their hearts, for he was not at any time an easy man to live with. If there was no love to provide an easement of the days, it was much harder for them than it was for us who adored him. Love makes a cushion for the bad times, a filter for the evil times and a mirror for the good times, when we could reflect the sunshine we felt back into his life so he could bask in it.
This is the man I was - and still am - proud to call my husband. For me the divorce never happened, I was and am his Queen even now.

There is one question everyone asks, that is, every historian and historical fiction author, so I begin this part of my narrative with the statement which I declare on my immortal soul to be true.
I was virgin when I went to the bed of King Henry VIII. I say this with honesty and truth and swear to its truth on my immortal soul and that of my husband the king, because it is a truth: his brother Arthur, Prince of Wales, was ‘impotent’.
Now let me tell you how this sad situation came to be.