The Devil at my Heels

Following the murder of his friend, Dr. Michael Stuart, George Randall, mild-mannered professor of History, finds himself caught up in a dangerous race to uncover the killer’s identity and find the solution to an eight-hundred-year-old mystery surrounding the disappearance of a priceless royal treasure. Randall’s search takes him from England to Italy, Austria and Germany as he is confronted by a tangled riddle reaching back from the thirteenth century to the final months of the Second World War. Randall employs his research skills as well as deception and fast footwork as he searches for an ancient manuscript that holds within its illuminated pages the secret of a treasure long thought lost. In spite of attempts on his life and the lives if his daughter and his fiancée, Randall remains determined to unravel the secret and find his friend’s murderer. 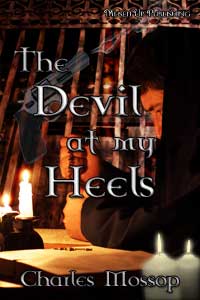 The Devil at my Heels

Dr. Michael Stuart, red-bearded and in his early fifties, closed the door behind the last of his dinner guests and sighed in satisfaction. Thank heavens they've gone, he thought. He went quickly to his study, opened the small, fireproof safe he kept under his desk and withdrew a plain brown file folder. Relocking the safe, he put the folder on his desk and sat down. This is it, he thought, looking at the sheet of yellowing parchment the folder contained. The first definite proof in eight hundred years. That stuff will be worth a fortune, and the publicity will be incredible. Could get me a knighthood. When I publish this, we'll have to rewrite the history books. Thank you so much, good King John.

He looked up and frowned as the sound of footsteps reached him. He rose, walked out of the study and stopped abruptly at the sight of a man in dark jacket and slacks standing in the hallway.

“What the hell are you doing here?” he demanded. “How did you get in?”

“Easy. You left the front door unlocked after you saw your guests off. Very careless of you.”

Stuart heard the cold menace in the intruder's voice and suddenly realized the danger he could be facing. He strove to keep his voice steady as he tried to take control of the situation.

“I want that parchment back. I only asked you to authenticate it; I didn't give it to you.”

“I've told you. I've got it in safekeeping. I can look after it for you.”

“Bollocks. You just want the glory. That document belongs to me, and I want it back.”

Cold-fisted fear squeezed Stuart's vitals as in the dim light of the hallway he could see the intruder carried the heavy iron poker from the front room fireplace.

The man took a step closer.

“Give me that letter, Stuart. I'm through playing games.”

A bead of sweat snaked coldly down Stuart's spine. There's a phone in the study, he thought. If I can get in there I can lock the door and call the police. They'll believe me, not him.

He spun on his heel and made a dash for the open study door. He heard a yell of anger and felt his shirt rip as a strong hand tried to hold him back. He stumbled, half turned.

The heavy poker struck the side of his head. Its thunderous impact was the last sound he heard.