Stephen Monaghan is a brilliant chemist and gifted sculptor. Unable to love a human woman, he uses his genius and arcane science to create a living woman out of wood. Just one can’t fill his bottomless need, so he creates more and more of these dolls. With each act of creation, he loses something of himself: his signature, his knowledge, his shadow, his voice and finally his blood. His sacrifices produce dolls that do not just move but live and learn, exploring humanity through the humans that inspired their creation. The dolls do not become human, but evolve into creatures with free will and self-expression. By the end, he is more doll than man, and they are more human than human. 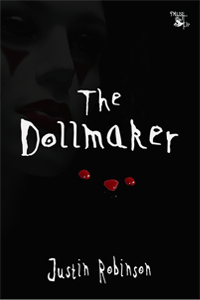 Those eyes never closed. It was Stephen’s fault when deciding against lids. That might have been a mistake. Even shutters would have helped. At least now he could find comfort by choosing to believe she slept. Knowing for certain she never did, that she stayed conscious, watching him snoring beside her, might be too much. When a human woman would sort through her subconscious mind in vivid dreams, the doll was a careful blank. But the true question was something he never let himself think. What was worse, that she didn’t dream? Or that she might?

Stephen’s eyes opened with a start. The window was open, the air itself still and heavy. His skin stuck to the sheets. She lay facing him, wooden skin bone dry. She had been born a little over a week ago. In a way, she was still not complete. She was still not quite the figure he had fallen in love with. The clothes, the costume, were waiting for her.

He wanted to do something more. Beyond the physical acts. She had to be complete.

She had to be loved.

He kissed her on the forehead. She reached for him, but he was already up, already going into Emily’s room. The hairbrush was on Emily’s nightstand, still entwined with strands of crow-black hair. He returned to his bed and beckoned to the dancer. She crawled to him, once again reaching. He gently turned her. There was no doubt—had she wanted to resist, she could have. She turned her slender back to him and waited.

The pins came from her hair easily. It fell around her shoulders, caressing him with a wave of lavender perfume. One hand supported the thick, black mane; the other passed the brush through it, as carefully as possible. Her fingers closed around his knee as she leaned back into him. He was thorough, working the tangles from her hair as the act worked the tangles from his mind.

After a hundred strokes, he refastened her bun and kissed the graceful slope of her neck.

“I have something for you.” His touch ran from leg to belly to breast to arm to hand. Her delicate fingers closed over his, softly as a moth’s kiss, and she let him lead her to her feet.

“You’re going to need to be dressed soon.”

No reaction. Not a cocked head, not a dramatic fall. She only followed him through the house. “Before I made you, I had an idea of what you… You need to be dressed a certain way.”

This she nodded at. Did she know? Did she see it in her mind? There was no brain, no case. Her head was mahogany, through and through. There was nothing to think thoughts, and yet she seemed to.

He opened the door to what had been Emily’s room. He had intended to take the doll here first, but sex and blood had stopped him. Now was the time for her to assume her identity. To become the dancer truly.

The outfit laid waiting on Emily’s pink sheets. White tights and ballet wrap skirt, pale pink leotard and pointe shoes. She sat down on the bed and touched the clothes. Looked up at him. Still no question. She picked each up in turn, turning them over in her white hands. Stephen left the room and shut the door. He couldn’t see her incomplete. She had to be the dancer in total, or none at all.

He sat in the hall, watching the door. In Emily’s room the scrape of cloth on wood. She was taking forever. This was it, to see how perfect he made her, in the image of his ballerina.

That she would be imperfect was terrifying; that she was perfect was worse.

The twin shadows of her feet waited just behind the door. Was she afraid, too? Terrified to displease?

The door swung open. She was unsure. Clothes, precisely arranged. The costume, the figure, everything was as he imagined.

He stood. She seemed to flinch for the barest moment. He embraced her with desperate hands and crushed her lips to his. She wrapped him in her wooden arms with the strength of relief.