The Edge of Forever (MF)

A woman who lost everything she ever loved...

Poppy Matthews lost her husband and unborn baby in a car accident. Even years after his death she still moves through life without meaning, that is until her husband's older brother offers her a safe haven. Deciding to move to Blithe, Alaska, Poppy finds love again in the most unlikely place.

He loves her even though she is his brother's wife...

Blake Ellis has lived an isolated life since his brother Jon died two years prior. When Poppy, his younger brother's widow comes to live with him, Blake knows his feelings for her are far from innocent. Both of them have suffered a heartache that has yet to heal, but they find comfort and love again in each other's arms. But not everyone thinks the two should be together, and they will go to great lengths to make sure they know it. 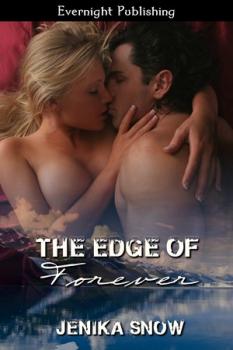 The Edge of Forever (MF)

His warm breath teased the skin of her belly, and she took in a stuttering breath. The first touch of his lips on her scar had her mouth parting and her pulse racing. Over and over he kissed and ran his tongue along the proof of everything she tried to forget. The tears she tried so hard to keep at bay spilled forth until great, wracking sobs left her. Poppy covered her face with her hands and cried as Blake continued to lave attention to the part of her body she had always felt discomfiture over.

“You’re beautiful, love.” Blake whispered. “You’re the most beautiful woman I have ever seen.” His hands took over where his lips had just been. He caressed her in a gentle sweep of his fingers, so soft and smooth that goose-bumps formed along her skin. “Every part of you is beautiful.” His hands moved up, and up, until they stopped right below her bra. “Look at me.” Poppy let her hands fall away and looked at Blake, who was now mere inches from her face. “I want you to tell me you’re beautiful.” He leaned in the rest of the space and kissed her long and slow. When he broke the kiss he stayed only inches away again. “Tell me, love.”

Poppy licked her lips, the words getting lodged in her throat. His eyes urged her to continue, to find the strength deep inside of her. When was the last time she felt beautiful? When Jon told me right before he died. Now was not the time for this, not when Blake opened up her heart again. Not when she felt something. Finding the courage deep inside her soul, Poppy grabbed for it and didn’t let go.

“I’m beautiful.” The words were barely a whisper from her, but Blake heard her nonetheless and brushed his lips across hers in response.

With quick movements and expert hands, Blake had her shirt off and her bra undone and tossed aside. She had only ever been naked in front of one person, had only ever given herself to one man, but the way Blake looked down at her, with not just desire but love and understanding, had the wall she had built around her heart after Jon died fading away. She lifted her arms and ran the pads of her fingers across his bare chest. His body lightly shook beneath her hands, and she knew he was just as affected by this encounter.

“I want you, Blake.” Poppy dropped her hands and gripped the edge of her pajama bottoms. She lifted her hips and dragged them down her legs and off when Blake moved aside. He looked almost stunned, or unsure of her actions, but he didn’t stop her. So she reached for the drawstring of his lounge pants. “Tell me this is right, that you want this, too.” Hands on the strings but not making a move to loosen it, Poppy stared into his eyes. Everything around her stilled as she waited to hear his answer. It was strange how the roles had been reversed. It now seemed Blake was unsure of what was transpiring. He closed his eyes, and his jaw clenched as he dealt with his internal battle. Poppy went to drop her hands, but Blake anticipated her move and placed his hands atop hers, stilling her movements.

“I want this, so much, Poppy.” He removed her hands and stood. For a moment she thought he meant to leave her in his too big room, alone and naked, but then he pushed his pants down and crawled back on the bed over her. His big body rested atop hers, pressing her into the mattress and sending a lovely, heavy sensation coursing through her. “I want you so much, Poppy.” Warm, hard male flesh molded into hers, making the sweet anticipation of release just a reach away.

Blake’s narrow hips fit perfectly in the cradle her hers, and the hard, impossibly thick length of him parted her labia. She was wet, unbelievably so, and his shaft moved against the slickness on its own accord. A guttural groan left him, and he dropped his head to her shoulder at the same time his hips jerked and his cock slid against her again.

“You feel so good, Poppy.” He curled his fingers around her upper arms and pressed his hips into hers again. Over and over he did this, his length sliding up and down as he rocked against her. The base of his erection bumped her clit on every upstroke, and Poppy had to bit her lip or she would have screamed for him to move harder, faster. “I’ve wanted you for so long, ever since our relationship changed during those conversations all those years ago.” Another bump to her clit and she squeezed her eyes shut. So, so close to feeling that explosion she longed for.

“Yes, Blake. Please,” she whispered into his hair. He was so big, so muscular, and so very male that Poppy felt wholly feminine beneath him. She begged him for his words, for his touch, for his emotions. She wanted that from him, wanted him to break down his wall like she had. 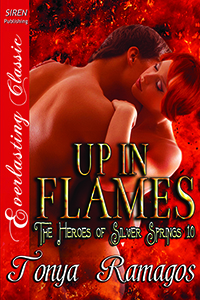 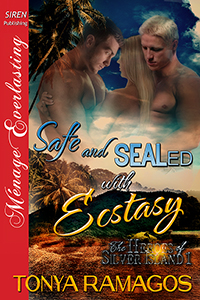 The Suit and His Switch Claim Their Sub (MMF)
Jenika Snow
In Shelf
$3.99 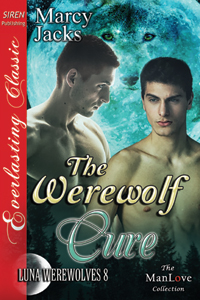