Gabe fell in love with Luce the moment they met. Unfortunately, love is a forbidden emotion among angels, and their sin costs one of them his wings.

Note: This is a very short story, and doesn't have a very happy ending, but I think it's one of the best stories I've written to date. 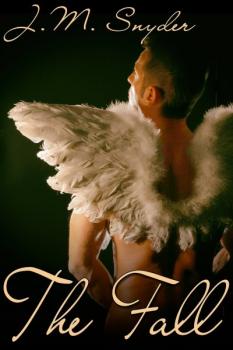 Luce had come to him that morning, tears streaking his alabaster face. “What’s wrong, love?” Gabe asked, rushing to embrace his friend.

Luce covered his face with his hands and let Gabe pull him close.

In his arms, Luce cried. “I’m to leave at once,” he said, voice thick with tears.

Fear curled in Gabe’s stomach. “Leave?” he asked, not sure he understood. “You mean you’ve been sent on a mission?”

Luce shook his head, his long straight hair brushing against Gabe’s chin. “I mean I’ve got to fall.”

The words echoed in Gabe’s head. “No,” he whispered, running his hands up Luce’s back until he held the shafts of Luce’s wings in his hands. Those proud, beautiful, ebony wings, so black they looked blue in the sun. He recalled the way his own ivory wings entwined with Luce’s when they made love, soaring high above the world until they touched the stars -- Luce couldn’t fall. He couldn’t. “Why?” Gabe asked, choking back a sob. “Why?”

Luce shook his head again. “You know why.”

And it was true. It had been he who fell in love first, when he met Luce so long ago. It had been he who seduced the younger angel, invited him to his bed and held him so close that first night, the two of them trembling with fear of discovery. As time passed and no one questioned their friendship, Gabe let himself believe no one noticed. Or no one cared.

But he should have known -- angels were not meant to love. “It’s all my fault,” he said, resolution strengthening his voice. “I’ll tell Him it was my fault. You don’t have to fall for me.”

He hugged Luce tight and rocked him gently. Gabe pushed back his fear and hoped his position would grant him an audience immediately. He couldn’t let Luce fall because of his own lust.