In this collection of 6 short stories and 9 short essays we explore the future world of robots -- fembots in particular -- from the author's own unique perspective. The essays cover factual speculations and extrapolations into what could be our very near future, as well as discussing the aspects of what to expect from a robotic future. The stories show the resulting relationships and interactions that have come from those speculations form the basis for the stories that follow. The stories, always sexy and romantic, are not always HEA -- but then again neither is life. The stories include: "My First Robot" where a young man is given a robot who turns out to be rather more than he expected. "Three Strikes Against Her" wherein the adventure of buying a used fembot turns out to be more than either the purchaser -- or the fembot -- expected. "Fembot Studies" where you go to learn just what this fembot thing really is all about. "Mandy", was introduced to us from a historical perspective in the previous story. Now learn her bittersweet story firsthand. "My Working Weekend" where an overworked executive learns what it means to be set up by his boss and boss's fembot assistant. And "Lindsey's Story" about a young fembot created as a throwaway toy. These are all stories that don't pull any punches about how we will actually relate to and with our robotic companions if we build them correctly to start with. 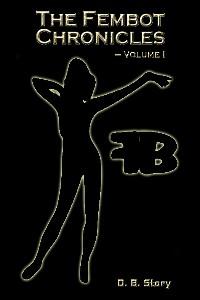 From "My First Robot":

The notice of her death arrived from the lawyers and was short on tact. I'd never expected to inherit anything from my Aunt beyond her priceless advice, since I was somewhat removed in the family line -- especially after my parent's divorce -- and Aunt Kate had more charities she cared deeply about than I had people I knew on a first name basis. But the short, tactless letter said she'd made provision for me to the amount of $150,000, two first class airline tickets anywhere in the world -- and a robot to be delivered in three days.

Now I hadn't even known Aunt Kate had a robot. Though private citizens had been able to own robots for nearly a score of years now, they were so rare and expensive that I might as well have wished for my own private sub -- orbital jet -- and the airport to keep it on. How she'd gotten a robot, and why she was giving it to me, was a complete mystery.

Normally Aunt Kate was thoroughly organized. In fact, had I seen her appointment book I would have expected to have seen that she had scheduled her own death, rather than have it just happen. She had never even once in her vid -- mails mentioned a robot -- or any other inheritance. In fact she was renowned for stating that if you didn't make it on your own it really wasn't worth having at all. But the lawyer's letter lay there, and after twenty readings it still said the same things. I got a hundred and fifty grand with all taxes paid, a pair of first class plane tickets that must be used within the next year, and one robot with no other details about it.

Three days later the letter was now lying on the two books my friends had gotten me when they'd heard the news. There was Robots for the Completely Clueless and A Neophyte's Guide to Robotic Relationships. Even those books seemed written for someone who knew more than I did.

Over the last three days I had gone through every vid -- mail from Aunt Kate for the last three years, carefully looking in the background to see if there was a robot somewhere in them. Maybe reflected in a mirror. Maybe she had made some comment about it that I'd missed. Aunt Kate wasn't one to waste her time repeating herself to slow learners. Nada.

I was reaching for the lawyer's letter for a 21st reading when my doorbell rang.

I dropped the letter like it was on fire and tried to walk calmly to the front door of my small apartment -- as if someone was actually watching me. Ha!

I opened the door, hoping to see a couple burly deliverymen with a large crate. Instead there was a woman in her early thirties wearing a brief top and skirt standing there.

My face must have fallen -- not her fault -- because a sudden expression of concern appeared on her face. I realized that my disappointment at not having this be my special delivery was showing, and that was hardly fair to her. I firmed up my features and attempted a smile. It was only fair imitation of a genuine one.

"Are you Don Sutton?" she asked in a mellow contralto.

"Yes," I replied, wondering what she wanted.

"Good," she announced in that same voice.

She paused for a moment, clearly expecting me to say something more, but I didn't have a clue what she expected of me. So rather than saying something ill -- informed and confirming my foolishness to a pretty woman -- Aunt Kate taught that silence was more intelligent than most words that broke it -- I stood there mute waiting for some clue of what was expected of me

It must have finally dawned on her that I either didn't know what was happening, or wasn't going to say anything useful, so she stuck out her hand and said, "Hi, I'm Jenni 731 -- your robot."