In this second collection of 6 more stories we further explore the intriguing future world of robots-fembots in particular, but not exclusively-from the author's own unique perspective.

* "Pickup at the Robot Club" tells the story of the dark days after the robots are first emancipated and struggling to deal with their new reality of being cast out to survive as best they can. And of Jon, a human looking for more than just quick hook-up, even if he still has a lot to learn about robots in general. * "Robert Steel" tells of Sandi, a graduate student of the Fembot Studies course out to tame and capture the wild m-bot of her dreams. * In "Aunt Lonnie" a young man discovers the secret of his too sexy Aunt Lonnie and why she was shunned by the rest of his family. * "G. Jane" tells the story of a Gigolo Jane model whose life is run by a smalltime pimp until she and her sister fembots are forced to cope on their own. * "Marilyn" speaks to the problems a fembot encounters when she is made in the image of the famous screen icon. Can she finally find a happy ending this time around? * "Abandoned Property" is a story of opportunity meeting preparation, otherwise known as luck, as a young man visiting paradise finds a way to bring it all back with him.

Romantic, HEA, and light GLBT themes are explored in how future relationships may well work out.

Warnings: This title contains sex with robots including F/F themes. 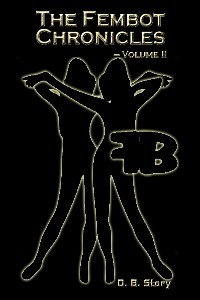 Excerpt from "Pickup at the Robot Club:"

Jon had just sort of celebrated his thirty-fourth birthday two weeks earlier when the adventure that would lead him here had started. It was all Tom and Susie's doing.

Tom and Susie were Jon's neighbors over the backyard fence. Tom had lived there for the five years since Jon had bought his little piece of suburbia next door. They were virtually the same age and spent many a weekend afternoon jawing over the common fence.

Then six months ago Susie had come into Tom's life.

Susie was absolutely gorgeous. Long light blonde hair with a gentle wave in it that framed a beautiful face and cascaded down her back. Five feet six inches of always tanned body that she never seemed to mind showing off in short shorts and a skimpy top to accent her long perfect legs, or working in the yard in some of the sexiest bikinis on the planet to accent everything else. Add a sparkling smile and personality and she was a real winner. And she absolutely loved doing everything she could for Tom.

Tom was the luckiest guy Jon knew to have a woman like Susie in his life. Not that Tom—or Jon—weren't good enough looking men. It just seemed that neither had quite clicked with the women they'd dated, and much of their pre-Susie talks across the back fence had been about their current relationships—all of which seemed to follow the same path of failure. Then Tom found Susie and you could see they were a couple from the get go.

Jon's birthday had looked to be a quiet affair. His parents lived over a thousand miles away and his younger, married sister already had two young kids to look after. Jon didn't see himself wanting kids ever. He was just not the family type. So he was facing a quiet birthday when he heard Tom and Susie over the fence. They seemed to be celebrating something so he went out to see what was happening.

They were barbecuing in the backyard and when they found out it was Jon's birthday they insisted he come right over. Turned out that Susie was sporting quite a rock on her elegant ring finger and they were celebrating their engagement. They morphed that party into an impromptu birthday celebration as well, and somewhere after Jon's third beer Susie asked him The Question.

"So, Jon, why haven't you settled down yet?"

That's a pretty personal question to a thirty-four year old bachelor, but somehow Susie could ask it in a way that seemed concerned—rather than rude.

So maybe it was the way she asked the question. Or maybe that last beer. Or maybe it was being depressed about being alone on your thirty-fourth birthday when your friend and neighbor had just bagged the most beautiful girl around. Whatever it was, Jon gave Susie The Answer.

He looked levelly into her clear, green eyes—a little hard to do given that they were above her ample and barely covered chest—and told her straight out, "Because I've never met a woman like you."

Her reaction surprised him. She turned to Tom and asked, "Does he know?"

"No," she replied to her fiancée with certainty. "It never came up."

"Me neither. I guess I assumed that you'd have mentioned it along the way. It's yours to tell, but didn't he ever see your you-know-what?"

"You're too sweet when it comes to me," Susie said, giving Tom a quick kiss. "And I never wear it outside because it's going to be yours alone now."

Jon was completely baffled by their conversation. He finally had to interrupt. "Tell me what?" he demanded of them both.

Susie and Tom looked at each other. Then Tom came over and put his arm around Jon's shoulders.

"Jon, good buddy. Susie is a 'bot. A robot," he added, seeing Jon's puzzled expression. "And there are a few others like her still out there."

Jon turned to look at Susie with his mouth hanging open in an unspoken question he couldn't quite get out.

"Of course I am, silly," she said brightly back to him. "A fembot, to be precise." She seemed proud of being exactly what she was.

After that, the course of the afternoon changed radically for Jon.

There were more beers intermixed with The Story of how Tom had met Susie and how they'd fallen in love. Though robots were somewhat common now, Jon had never knowingly interacted with any, except at a couple of stores where they handled checkout duties. And although the 'bots were free now, you didn't expect one to just show up in your rather sedate neighborhood and fall in love with your best friend. It took a long time to tell the story because Jon kept interrupting with very basic—and occasional stupid—questions about robots overall. Afterwards when his head had cleared somewhat he thought he must have asked some of the questions more than once.

Jon awoke in his own bed the next morning with a very fuzzy head, and the feeling that his world had been overturned somehow. When he looked out his window, he could see Susie in her yard in a minimal yellow bikini cleaning up after yesterday's party. Jon quickly put on his old, frayed bathrobe and dashed out to the common fence.

She saw him immediately. "Hi, Jon," she greeted him brightly. "How are you feeling today?"

"A little confused," he answered truthfully. "Are you really a..."

"A robot? Of course I am. I told you that yesterday."

The world seemed to suddenly rotate a bit faster as it looked like all of Jon's memories were intact. That left only one question that mattered—and it mattered a lot.

"Could I really meet someone like you? A robot, I mean?"

Susie looked him over carefully, as if seriously assessing him for the first time before being willing to consider introducing him to any of her friends. Whatever grade he needed it seemed he passed because she replied, "Come on over tonight when Tom gets home and we'll tell you how it works."