Misha has never been the same since his mate and child died in a house fire. He was managing, but his thin hold on reality quickly frayed. As a feral wolf, he was lucky to find a pack willing to work with him and a beta available to watch over him.

Xavier just wants Misha to be better. He's heard of the awful things that can turn wolves feral and also what most packs do to them. He's glad Misha didn't end up that way, and he wants to be able to help him, no matter what Misha needs from him.

The pack is waiting for him to come around, and they're all ready to welcome Misha to their ranks, but it's up to him to come back from the dark thing he's turned into.

Xavier couldn't help but be sorry for his pack’s newest member. Misha had been a man once. He knew that. But looking at him, he was little more than a snarling beast, frightened of everything and everyone. "It's okay, take it easy." Xavier offered Misha some bacon, but Misha refused to get close enough to take it. Xavier tried moving toward him, but Misha snapped at his fingers.

"Shit," Xavier grumbled, wishing, again, that Chris was nearby so the pack omega could use his empathic gifts to help calm Misha down. He really needed the omega when things with the feral got tense, but Chris had gone to bed, as had everyone else, and only Xavier was left with Misha. It had been decided Misha needed someone with him at all times, in hopes of reaching him and bringing him out of his darkness.

"I'm not going to hurt you." He'd been repeating that for days. At least Chris was able to get Misha to stop growling, but Xavier had thought Misha should have already come back to himself. He couldn't stay a wolf long term and hope to become human again. They didn't work like that. Too long in wolf form, and his mind would start to change as well. If his mind went too far wolf, he could be lost forever. Misha had to be brought back sooner rather than later if there was any chance of his recovery. They didn’t know how long Misha had been a wolf before they’d gotten the call about him. It could’ve been days, or it could’ve been weeks. They weren’t even sure which pack he’d belonged to before he wandered into the neighboring pack’s territory. There was too much they didn’t know. Without answers to the questions, they couldn’t find a way to bring Misha back to himself. Only Chris’ gifts had even given them his name. The fact that Misha still remembered his name gave them a little bit to go on.

The basement was the quietest, most secluded place in the pack house, and Xavier needed both of those things. They should have been working in his favor getting Misha to calm down and come back to himself, but so far he'd had no luck. Misha was as bad as he had been the evening Chris had brought him into the pack, if not worse. Xavier really wasn't sure. He'd had maybe six hours of sleep in the past three days. He'd spent the rest of the time with Misha, trying to gain his trust and trying to calm him down. There was something about Misha that was reaching out to him, calling to him for help. He didn’t totally understand it, but he couldn’t resist that call. He had to be there. He had to be the one to help Misha find his way back to the real world.

As the stair door opened, Xavier turned to look up at the steps. He was glad it was Chris standing there.

"You can come down," Xavier called softly.

Chris, as the omega, was allowed everywhere in the pack, and he shouldn’t have hesitated at the top of the stairs just now, but Xavier quickly realized why he had. Gabriel was with him, and Xavier was pretty sure Chris knew better than to bring him down there with Misha. It wasn't that Gabriel was bad or would somehow hurt Misha, but Gabriel wasn't a calming presence. He pissed people off wherever he went, and they didn't need that with Misha.

"I'll be back to bed in a few minutes. Your cock can wait that long," Chris said.

Xavier chuckled and turned back to Misha. He looked like he was listening too, with his big black ears pricked forward.

There was a soft kiss, then the door closed, and Chris’ faint footsteps descended the stairs.

"You're good together, despite what you may hear sometimes," Xavier assured Chris.

"That man is insatiable," Chris said as he came to sit down beside him on the hard cement. They'd never really gotten around to finishing out the basement. There hadn't been a need. They didn't actually use it much, and it had become just a place for them to retreat to during tornado warnings, which didn't happen all that often deep in the mountains. The laundry room wasn't even down there anymore, since they'd had it moved upstairs a few months before to make it easier for everyone to do their clothes.

"You care about him anyway," Xavier said. He knew Chris and the look he got when he was into someone. He'd wanted to be that person, once, but Chris was a much better friend than whatever they'd tried to be for a few awkward nights.

Chris snorted. "I do, but let's not talk about him. He's fine. He's not going anywhere. We have other wolves to worry about right now." He nodded to Misha, bringing Xavier's attention back to him.

Xavier nodded and looked at Misha. "He's not doing any better."

Chris got on his knees, then began moving forward, but Xavier grabbed his wrist, pulling him back. "Amanda will kill me if you get torn apart by a feral werewolf on my watch."

"Then come with me."

Part of Xavier was jealous of Gabriel and that he'd been the one to get Chris's heart in the end. The other, much larger, much saner part of him was glad he wasn't in the position of having to worry about such a reckless omega all the time. He was pretty sure he'd never be able to let Chris out of his sight if he was. The wolf was good at getting into trouble, but he was just as good at getting himself out of it, too. 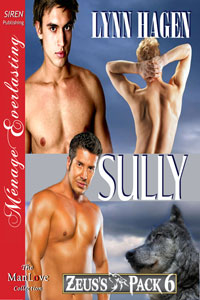 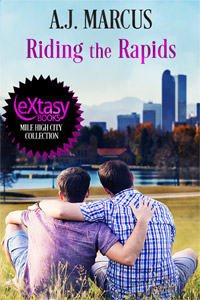 Howl and a Hose
A.J. Marcus, Caitlin Ricci
In Shelf
$3.99
Tweets by
sirenbookstrand