When Arron Carmichael and Ramsey Roland broke up it devastated both of them, but Ramsey couldn’t handle Arron’s family secret. When the family business brings them together, they discover Ramsey has a secret larger than any Arron thought possible.

Arron is part of the Gardener family, a group of witches who have protected the world from daemons for thousands of years. Ramsey couldn’t deal with the magic that was an intricate part of Arron’s life, so he told Arron they were finished, and he needed to leave. His decision left two hearts broken.

When Ramsey is mugged while going to a bar to hang out with friends, it opens him up to the world Arron had hinted at, but it also brings Arron back into his life. Arron does his best to save Ramsey from the dark forces that are hunting them both. When they learn the reason Ramsey is being hunted, it shocks them both to their cores but brings them closer together. Only together can they hope to defeat the forces working against them. 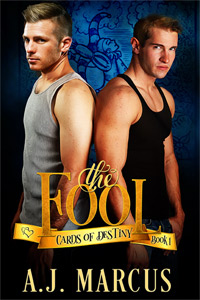 More From Cards of Destiny

Ramsey Roland ran down the trash-filled alley. He didn’t bother looking over his shoulder, he could still hear his pursuers’ footfalls behind him. His quiet night out on the town had been interrupted by two strange men who had intercepted him just a couple of doors down from the bar where his friends were waiting. He couldn’t remember what they’d said to him that made him run, but he didn’t doubt that his life was in danger. The sidewalk packed with bar-goers had given him the opportunity he needed to put some distance between him and them, but he hadn’t been able to get into any of the bars. The lines were too long and even cries of help had met with scoffs from the bouncers. The alley had seemed like a good idea, but the lack of people gave the men chasing him a chance to catch up. Ramsey put on a burst of speed as the alley turned to the right.

His luck ran out. A tall wooden fence blocked his path.

“Shit.” Ramsey spun on his heels and headed back the direction he came.

The two men stood in his way.

“What do you want?” Ramsey pulled out his phone and frantically punched 911 and Send.

“Your time’s up,” one of the men drawled, then his eyes glowed a sickly unnatural orange.

“What’s your emergency?” the 911 operator answered.

“Enough of that.” The second man gestured.

A feeling like electricity danced over Ramsey’s skin, raising the hairs on his arms. His phone flew out of his hands and smashed against the brick wall next to him. He stared at it as his heart felt like it was going to burst.

“What did you do?” He gasped out in ragged breaths.

“Cut you off.” The first man dashed forward, suddenly moving faster than any human should’ve been able to. His dark trench coat billowed out behind him like a pair of huge murky wings. He grabbed Ramsey by the neck and slammed him into the wall.

Ramsey kicked at the man, but his feet never connected. It was like the man wasn’t even there.

“Slowly, we need to know where the others are.” The second man peered over the first’s shoulder. “The scent is old but unmistakable. He knows one of them. Which is surprising considering what he is.”

The first man laughed. “What he is, is weak.”

“What are you talking about.” Ramsey’s voice came out in a harsh croak. Between the cold and the man’s hand around his neck, he could barely form words.

Bright lights flashed across the alley.

Ramsey kicked again, this time he managed to connect with the man’s shin.

The man holding him grunted in pain but didn’t release him.

The light swung back around and settled on them.

“Hey, you there. Come out here!” A woman shouted.

“Help!” Ramsey tried to scream, but his throat was too abused.

“Can’t let you out of this.” Something sparkled in the light, then the first man swung his free arm at Ramsey.

Pain flared in his side, then he hit the ground. In the distance, the woman was calling for backup. Ramsey tried to get back up, but his head swam with the agony in his torso and the cold in his throat. He crashed down and everything went black.

Life with a Dragon (MM)
Marcy Jacks
In Shelf
$4.50
Tweets by
sirenbookstrand