It’s been thirty years since the economy collapsed, and all Dillon has ever known is a world without electricity or medicine, living in a community constantly under the threat of starvation as they struggle to feed the rest of the country.

Orphaned and alone, unsure of his future, Dillon serves as a lookout, watching for the bands of Scavengers that prey on towns like his—while also trying to keep away from the mayor’s twin sons, who are bent on terrorizing him.

When a Forager rides into town, he opens Dillon’s eyes to the possibility of another life for himself. And when a Scavenger attack leaves the Forager injured, he sends Dillon out on a mission that may mean the difference between life and death for the mayor’s missing daughter. Dillon is about to find more than a way to help his community—he’s about to find himself. 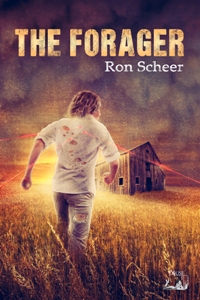 We’d just passed a crossroad, and I wanted to do one more mile before we stopped. Out here, outside of town, I could figure on every crossroad marking off another mile, which meant getting to the next one. It would be farther than any search party would come. In sympathy for the horse, I stopped and climbed off. My legs hurt, but a soft snort from Fred told me she appreciated my weight being off her back.

Holding her reins, I continued walking. After about a hundred yards, my legs were protesting. My butt hurt, and a headache covered the back of my skull. I kept going. One stride after another I continued, and Fred followed.

To put my mind off the pain in my legs, I thought about why the Governor made it illegal for anyone but Foragers to search outside of town. Everyone said it was because of the Scavengers, but I wondered if it was more to do with keeping the towns under each mayor’s thumb. A short while later, we arrived at a gravel crossroad. A run-down farmhouse stood on one corner, a tree growing through its roof. No chance of spending the night there.

Turning east onto a dirt lane, we walked up a hill. A few trees bordered the road here and there, and the dim outline of fence posts led on into the distance. A few night sounds punctuated the quiet, but the loudest noise was the crunch, crunch of gravel under Fred’s hooves

I kept an eye out for a house or barn where Fred and I could spend the night in comfort. What we found a quarter of a mile further on was completely unexpected and completely perfect, or so I first thought.

I had no name for the type of house. There was a small patio, a front door, and beside it three narrow windows. The rest of the house was built into a hill that served as a roof. Large metal outbuildings flanked it, big enough to hold a combine. Despite my fatigue, the sight of those outbuildings had my blood pumping. Sleep would have to wait.

Fred and I went up the gravel drive and headed straight for a small concrete pad between the house and shed. There was a pipe sticking up out of the pad with a handle on the end. It looked exactly like the water pump kids played with in the town park.

I pulled the handle and the sound of water gurgling in the pipes was soon followed by a torrent of water splattering the concrete pad, myself, and Fred. Lowering the handle to slow the stream, I cupped my hands, and leaned over for a drink.

Spitting, spluttering, coughing, and gagging, I choked the water from my mouth and throat. A sickly-sweet metallic taste accompanied small pieces of gunk that stuck to my tongue.

In the daylight, I’d have noticed the brownish-orange of the water. I’d seen water that color when I first moved from my parents’ house into the RV. The tap on the side of our house hadn’t been used in years. After I’d hooked the garden hose up, it took a bit for the pipes to clear of rust and for clean water to flow through.

Moving Fred back a few steps, I opened the tap so that the water was once again gushing at full force. I let it run while I counted to one hundred. This time when I tried the water, it tasted fresh and clean, washing the awful taste of rust out my mouth.

I filled Fred’s nosebag with water, and rather than use the leather strap to attach it over her head, I held it in my hands. She drank easily from the bag, and before she was done I refilled it twice. She seemed sated, but I didn’t know her, or any horse, well enough to know for sure.

I walked Fred to the patio and attached an extra length of rope to the long lead on her bridle, tying her to a built-in grill. The tall and plentiful grass around the house offered her a place to graze. Now I was ready to see what was in those big sheds.

Their big, wide doors slid to either side on a track. When opened, they would be more than wide enough to drive a combine through. I tried pushing them apart, but only managed to produce a small rattling. It was a padlock. It was too dark to see much of it, but when I held it to test the mechanism, it was heavy and sturdy.

I walked over to the building on the right, but had no more luck there. Dejected, I scuffed my way back over to the house and tried the front door. The padlocks on the big steel buildings should have warned me—it too was locked.

Rushing back to Fred, I searched the saddlebags for a pry bar. Thanks to Josh, I possessed the skill to slip the lock. When I found one, I hurried back to the door and tried it the way Josh showed me. The door stayed shut and locked. I tried a few more times with the same results. Either I was doing something wrong or this was a different kind of lock.

I almost hurled the bar through one of the windows. What stopped me was the glass. Even out here in the country, I couldn’t justify breaking what I couldn’t replace. For tonight, I was beaten. I sat by the front door. I’d hoped for a bed, or a couch to sleep on, but it wasn’t to be. I sighed and closed my eyes.