To his horror, Paulo Santiago wakes to the sight of a ten-foot alligator stuck inside his kitchen. Paulo goes online and hires the services of Manijo Dulce, a sexy Ecuadorian god who enjoys handling alligators ... and men.

Work colleague Oliver Mead becomes Paulo's free psychologist about men, life in Barefoot Beach, canal amphibians, and dating a stranger called The Gator Guy. But does Oliver cross a line when he tells Paulo not to mix business with pleasure?

A few days later, Manijo turns up at Paulo’s place, agreeing to rid Paulo of the other alligators who live in the canal behind Paulo’s bungalow. Clothes are removed, libidos inflamed, and gators and hearts are captured. 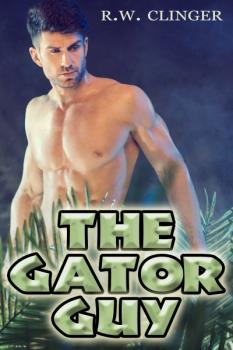 I moved from Boston to Barefoot Beach, Florida because of work, which consisted of a management position. My employer, RailSave Incorporated, stored valuable computer data for high-end clients. Mostly financial groups along the eastern coast. Wealthy establishments in Key West, Miami, Washington D.C., New York City, and Boston. If the world imploded, RailSave Incorporated claimed they would still have their clients’ data.

My transition to Barefoot Beach was rather harmless. Winter turned into summer overnight. I went from wearing February sweaters to knee-low shorts. I gained a tan during my first week at Montaba, the miniscule hacienda next to the Gulf where I lived. Pleased with my move, I left the Boston cold and snow behind, sucked up the sun, and learned my new position at RailSave. Barefoot Beach was a little north of Naples and welcomed me with open arms, shared its Latino culture with me, and saved me from the northern clutch of an icy winter and miserable Massholes.

No, I didn’t have a boyfriend. Instead, I lived alone at Montaba, or so I thought I was alone. Three alligators resided in the blue-green canal out back: Mo was ten feet long; Larry was nine feet long; and Curly was eight feet long. I assumed the three were a family, and a little pissed at me for moving in. Honestly, I kept my distance from the scaly trio and never found myself outside and by the canal. The screened-in patio was as far as I went. There, I watched the gators nap in the sun, swim in the canal, lounge under the palms, and feed on the fishes. The gators had their space and I had mine. Who said two different worlds couldn’t function as one?

One Monday morning in late February changed that idea of content living, though. I rose from my bed, took a piss, showered, shaved, climbed into a tight T-shirt the color of the Floridian sky, and slipped into a pair of khaki shorts and matching sandals. Ready for work, dressing down for the day, I headed into the kitchen for a cup of coffee, a picked orange that was fresh, and --

On the middle of the kitchen floor sat Mo, the ten-foot gator from the canal. The greenish black lizard stared at me with its beady black eyes, which suggested that Mo wanted me for breakfast. Behind him, the west screen on the patio was ripped open and dangled from its stainless-steel frame. Since the day I arrived in Barefoot Beach I hadn’t locked or closed the sliding glass doors that separated the screened-in patio and pool area from the rest of the stucco bungalow. Mo had broken through the west screen, trespassing inside the kitchen, and found himself caught between the quartz island and the dishwasher/sink area.

The gator was pissed. Anyone could have determined such an elementary assessment when he opened his toothy mouth and snapped it closed. The reptile tried to move to the right and left but couldn’t. The poor bastard was caught where he was at, unable to wiggle free.

He snapped his steel-like jaws again, left out an uncomfortable groan of sorts, and gave me a look that said, Help me, bud. I can’t do this on my own.

I heeded Mo’s request, jumped on the Internet in my bamboo-decorated study, and Googled: alligator rescue Barefoot Beach.

A list of two hundred or more sites popped up on the screen, most of which were foundations or non-profit groups and organizations that protected Florida’s wildlife. One web site stood out from the rest: The Gator Guy. Curiosity meandered through my fingertips and I clicked on the site. The page was comprised of a number of alligator pictures, the company’s address, e-mail address, and phone number. A brief description regarding The Gator Guy read, Have a Gator problem? Call me. 24 hours a day. 7 days a week. Will rescue gators and find them good homes. Low fees.

What the hell, right? I dialed The Gator Guy’s phone number on my cellular, listened to the line ring three times, and then a Latino-sounding female named Lucia said, “Hola! The Gator Guy. How may I help ju?”

I told Lucia my problem.

“Ju need to make an appointment.”

“I don’t think you understand me. I have an alligator in my kitchen. He’s trapped. I can’t get my coffee.”

“I need the Gator Guy, not coffee. An alligator needs removed from my kitchen.”

She called me something sweet in Spanish, told me to hold, came back on the line a few seconds later, and took my name, address, and phone number. Once that was accomplished, Lucia added, “Gator Guy help ju in half hour. No café, though.”

I thanked the woman and ended our call.

All That Shatters (MM)
James Cox
In Shelf
$3.99
Tweets by
sirenbookstrand