Ever since loitering in the university quad drinking from students, two hundred year old vampire Johann wants the thing he will never have - the boy with the golden hair. He stalks Lucas for years, meeting him once a year, watching him grow into a man until finally, he can no longer take the strength of his own desire. Will he give in to his need to make Lucas his or will he let him go forever? 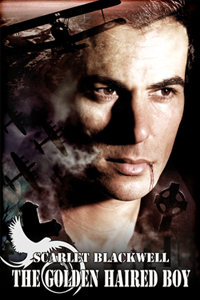 Johann waited until darkness started to fall and the man came around to light the gaslights, tipping his hat politely to him. A few minutes later, a golden haired boy with a satchel entered the square.

Lucas froze in place like a startled rabbit. It took him a few seconds to compose himself, but he did, remarkably. “Hello, Johann.” To Johann’s surprise, Lucas sat down beside him.

“I brought you something.” Johann took a box from his breast pocket and offered it to Lucas.

Looking astonished, Lucas took it. In the velvet-lined box lay a crucifix on a silver chain. In an act of selflessness, Johann had provided protection for Lucas, a guarantee that Johann would never get his hands on him. Ever. He had sat looking at the necklace at his home in New York, burning his fingers when he touched it.

Lucas drew the crucifix out. “I don’t know what to say.”

Something in his intense manner made Lucas frown. In a quick movement, before Johann could react, he let the chain swing toward Johann, the crucifix brushing his cheek and searing his skin.

Johann hissed, drew away, clapping a hand over his face, but Lucas had already seen the blister rising on the scorched flesh. “Oh, my God,” he whispered, standing up. “You’re what I thought you were. You bought me this to protect me from you.”

Johann bowed his head in shame. “You saved my life once, and I’ll never forget it,” he said, tears burning his eyes. “I wanted to say goodbye. That’s all.”

Lucas was silent. Johann rose to his feet. When he turned away, Lucas caught him by the wrist. The touch of his hand seemed to sear him the way the crucifix had. “Come back next year. In spring. I’ll still be here.”

Johann turned around, scanning the pale, silvery blue eyes. The air felt close and tight, as if someone held him around the neck. “You dance with danger,” he told Lucas. “It would be better for you to send me away.”

“I don’t need to. I have this.” Lucas dangled the crucifix in front of him, and Johann looked away, the burn on his cheek smarting.

He smiled, despite his misery, and gently disentangled his wrist, their skin sliding apart. “Next year,” he murmured, disappearing into the bushes.