The chill of ivory. The cold beat of light.

Aaron Carlson delivers the rare, the impossible, to the highest bidder. This promise is challenged, however, when he is asked to find a legend; an artefact that even time wants to forget.

For the right price, he agrees to assist the sultry Miss Worthing in her quest for eternity’s gift. He will deliver where those before him have failed.

The heart is what she craves. The ivory legend from 18th Century France; now no more than a cold whisper.

Aaron follows the trail of Trenton, his predecessor, and the heart’s latest victim. A man left empty, broken, by the heart’s perennial chill.

Aaron’s journey takes him through light, darkness and fire, opening old wounds and exposing him to new ones. 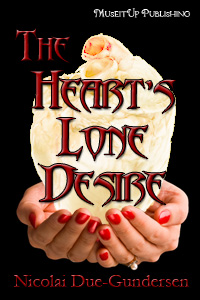 The sharp bell announced his entrance. He let go of the door, letting it slam, and stepped toward the counter.

“Hello?” he called. From the back of the shop, he heard the sound of feet and a firm clearing of the throat. The shuffling feet were taking their time. He leaned his elbows against the chipped counter, and his eyes scanned the warmth of the room. The cream walls held displays of man and nature; soft sunsets, couples gazing into each other’s eyes. Underneath the paintings were pieces of pseudo-period furniture, decorated with equally dubious bric-a-brac. Large tables of once varnished wood, Oriental cabinets, and thrones, poorly echoing the styles of Europe’s royalty. Each piece boasted a price tag fit for the wealthy or the impulsive spending habits of American tourists. Some of the tables, lacquered or covered with cloths, displayed small jewels and one or two bizarre decorations. A dull stethoscope lay on a table close to the counter, its metal broken and bent. To its right, a leather case of pertinent instruments; blunt scalpels of blackened steel, small forceps stained with forgotten blood.

Aaron drummed his fingers on the counter, watching as the curtain behind it stirred.

A thick hand pulled the curtain aside, giving way to an old figure. “Coming now!” The man brushed dust from the white of his hair and adjusted his thick-rimmed glasses.

“Good day, sir!” His smile jumped out of his face. “I’m Theodore, owner of this store. How may I assist you?”

Aaron cleared his throat. “I’m looking for a heart.”

“Why, yes! We have many hearts! The display windows show a nice selection.”

Aaron rubbed his chin slowly. “You have more? Of other materials?”

“Certainly, sir! Customers love to take my hearts!” Theodore chuckled, almost mechanically, at his own joke. “For that reason we offer pieces in various materials. We even have a heart of gold.” His fingers fumbled with his moustache before they leaped toward the counter, as if late for an appointment. “You would like to see it?”

Aaron shook his head. “No, I have no interest in gold.”

Aaron matched his grin. “I’m interested in another heart.”

“Why, of course! We have so many hearts—”

Aaron’s palm spread in front of the dealer’s face, swift and firm. It was enough to stop the old man’s speech. He placed the sketch on the counter, his fingers pressing, helping it find its original state. Theodore waited with patience as the folded paper began to yield, becoming flat once more, revealing its crumpled offerings.

“I’m looking for a very special heart,” Aaron smiled. “A legendary heart. It can only be found here.”

“Really?” Theodore’s face remained eager. He was adjusting the rim of his glasses, his free hand feeling the ink of the sketch. Only when he inched closer did his face turn pale.

“An old friend,” Aaron lied, knowing the game of deceptions had begun. “Trenton.”

“Yes, a Mr Trenton. We work for the same employer.”

Aaron eyed the man coolly, noting the licking of his lips. Like his colour, eagerness had fully drained from his face.

“Trenton. Trenton.” Theodore shook his head thoughtfully, letting the sketch fall back to the counter.

“This is a very special heart. An ivory heart. I would like to see it.”

Aaron’s words pressed gently, but the dealer’s eyes had turned cold. He squinted from something other than fear. Something Aaron couldn’t understand.

“Yes, I have heard of the heart. It was beautiful. From France.”

Aaron stepped closer. His stomach bumped against the counter. “So you don’t have it? You’ve sold it to someone?”

The dealer’s moustache twitched. “Yes. Not too long ago, sir. I’m terribly sorry.”

“I can make you another one, sir. A fine replica.”

“My client has no interest in toys.”

The old man laughed, or at least tried to. He really was trying too hard.

“No toy, sir; I assure you. No toy. Only the finest replica.”

“I am sorry, sir. The original has been sold.”

Aaron glanced calmly backward. The street was dusky and deserted.

“I’ll give you a good price,” Theodore promised. “A special price.”

Aaron pulled out the knife. “No,” he grinned. “You can’t put a price on anything priceless.” The knife hovered above the man’s lips, finally silencing him. His salesman’s grin ducked behind his moustache. “I know you have it, my good man. Trenton said so.”

Again, the dealer gave a slight flinch. Behind it, Aaron saw anger, an unknowable form of possessiveness. “The heart cannot be bought,” Theodore said. He wasn’t smiling now. “It is beyond price, beyond value.”

“Oh,” Aaron argued, “I beg to differ.” He stroked the blade down the old man’s lips, ending its line above the throat. A thin path of red began to blossom. “It’s at least worth your life,” he whispered. “Want to enjoy the rest of your golden years? Just give me the heart.”

The old man licked at the glistening scarlet.

Aaron pressed the knife into nervous wrinkles. The dealer swallowed with care.

The old man’s shoulders drooped. His fingers touched the length of the blade. “Very well,” he said, pushing it away. “Come with me.”

Aaron lowered the knife, fixing Theodore’s gaze with his own.
“You’ve made a wise decision,” he smiled. “I hope you don’t change your mind.”