When her father is brutally murdered in front of her eyes, Marian of Locksley is thrust into a world of treason and greed, where the ultimate prize is the throne of England. Left with little choice, she disguises herself as Robin of the Hood, an outlaw despised by royalty and loved by the people…and the wickedly handsome, steadfast Will Scarlet. Forced into hiding deep within Sherwood Forest, Will joins Robin Hood’s band of merry men, not realizing the fearless outlaw he follows is really the woman he desires for his own. He dares to risk everything in the fight for justice and love, longing for the day he can claim the courageous beauty. But first, England must be saved and legend must be born. 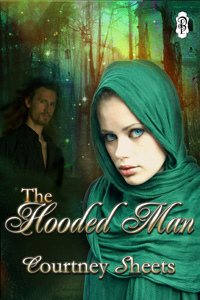 Quickly, she set to work, peering through narrow openings of cell doors. Her quest took her farther and farther down the darkening hallway. She had no idea which room held her prize. Once he was free, Marian would send him to the edge of the forest where Bess was waiting with some food. She longed to be able to be the one to help him to safety, perhaps even escape the castle with him but she knew she could not. The prince and Sir Guy would discover her absence, and her life would be in grave danger. One day she would find a way to have a bit of freedom….

Her anger rose as she took in how many people were imprisoned in the Prince’s dungeon. During her own captivity, her thoughts had never strayed past the door of her own cell as she focused on her own survival. The cries and moans of the pitiful creatures being held and tortured filled her ears. Marian empathized; she had been one of them. A chill cut through her, straight to the marrow. How many innocents lay dying in the bowels of the castle, all pawns in the Prince’s wicked game? Shoving down her rage, she forced herself to return to her quest. She looked through the opening of the next cell. Her lungs emptied. The man lay in a shadowed heap. His clothes were in tatters, his face bruised and battered. Marian sucked in her breath at the horrible sight. Her heart squeezed with grief and pity. He lifted his head at the sound.

“What are you doing down here?” His words pushed past cracked lips in a scant whisper.

“What have they done to you?” Marian asked. With shaky hands, she fumbled with the keys in a desperate attempt to open the lock. Finally, the iron gave up its hold with a screech, and she swung the door wide. “Come, we must get you out of here.”

She threw the keys next to the fallen guard and stepped into the cell.

“You must help me. I cannot carry you.” She reached down to help him to his feet. He draped an arm around her shoulder to steady himself once he was upright. A jolt of awareness shot through her at the miniscule contact. Heat, languid and rich, spread through her veins. Stumbling, they made their way toward the door. Marian turned her face downward, hiding her eyes from him. Even bruised and beaten, he was still the most handsome man she had ever seen.

“I should be carrying you, goose.” The sound of his voice, warm and lush, forced her gaze up to his face. A long ago memory skated through her mind. A faint smile tugged one corner of his full lips. Marian stared into the smoky depths of his eyes, remembering. His handsome features blurred as tears began to well up. He reached up and cupped her chin, running the backs of his fingers across her cheek to capture a wayward tear.

“What I have always called you.”

“Will Scarlet?” Marian asked, pulling back from him and drinking in his features. In that instant she knew. Pure pleasure poured into her heart as the memory flooded back.

“Aye, Marian.” He traced his thumb over her lips.

“You do remember me.” 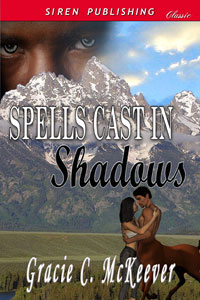 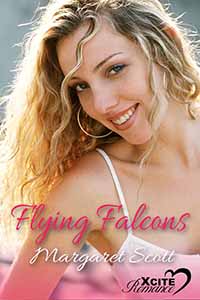 The Virgin Who Cried Wolf (MFM)
Alexandra O’Hurley
In Shelf
$2.99
Tweets by
sirenbookstrand