The Horse Who Went to Church

A rider faces a difficult situation, as she must attend church then almost immediately get her horse to a dressage show. There’s very little time after Mass to go home, hitch up the trailer, load up the animal, and be punctual for her first class.

To make life easier, she decides to haul her gelding to church. Firecross is munching hay in his trailer in the parking lot as she sits in her pew waiting for Mass to begin.

But the service never starts. Hooves suddenly clatter up the center aisle: they belong to Firecross, and pandemonium ensues.

Will the horse trample the parishioners? What will Father Frank’s reaction be? Will he throw the owner out of his church with her horse? And, most importantly, will they still be able to make it to the dressage show in time to compete? 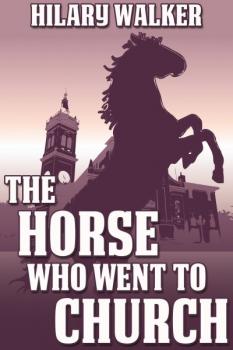 The Horse Who Went to Church

I rushed through my ablutions, threw on my clothes and tossed food into Wooster’s bowl. Leaving the back door open for the chubby hound to complete his own morning routine, I drove the fifty yards to the barn and fed the two waiting horses.

I held the hay at arm’s length while distributing it to my equine pals, to prevent any stray wisps from landing on my Sunday best.

The next task was to hitch my Expedition to the trailer. I studied the rear view camera as I reversed the vehicle, and heard that satisfying clunk! assuring me that I had aligned the tow bar and trailer hitch perfectly.

However, the noise was louder than usual and the trailer moved, which doesn’t normally happen. I got out to complete the hook-up, and saw why. I had backed up too fast, and knocked the post supporting the trailer hitch off its wooden block.

My horse transport was resting nose down on the tarmac, like a plane sans front wheel.

Now I was in a real time crunch, and you can imagine the expletives I wanted to use. But being a Sunday, I had to watch my language.

Raising up that trailer’s front end took forever. I had to drag my jumbo jack and jack stands underneath to lift it up then lower it back onto my vehicle’s trailer hitch.

I’m telling you all this because I want you to sympathize with my decision to make up for lost time and load Firecross into the trailer there and then and drive him with me to church.

Please understand, this was my only option: it meant that after Mass I would be able to head straight to the show.

Then why the heck was your horse galloping down the aisle? you may well ask, employing the word heck, because, again, this was a Sunday.

Not an unreasonable question, which I will endeavor to answer.

The 8 A.M. Mass isn’t as well attended as later ones, leaving room for my Expedition and trailer in the parking lot without taking up spaces needed by other parishioners.

I opened the trailer windows to give Firecross plenty of air. Suspended in front of him, his hay net was stuffed with enough fiber to keep him occupied for hours. I left him munching it and walked into church.

Two ushers opened the double doors to let me in. A creature of habit, I always sit on the left side of the aisle, in the third row from the front. That way I’m not exposed to close scrutiny by my parish priest, but he can see that I’ve shown up.

My watch now read 8 A.M. and Father Frank would be at the back of the church with the deacon and altar servers, waiting to proceed up the middle aisle to begin Mass.

Our choir director stood up and kindly requested us to turn off our cell phones and all other unnecessary electronic devices to join her in the processional hymn, as the piano player strummed a few introductory chords.

We all rose to sing. But our voices were drowned by a clickety-clack, clickety-clack of hooves growing louder as the perpetrator headed up the aisle.

Yet seriously, what else could it be? How many other horses were there in the vicinity? He must have roared past Father Frank et al.

This was going to be bad!