The Horse Who Hated Christmas

Paula's mare gets colic every Christmas, but her owner has no idea why because she has to go away over the holiday. She always comes back to a very sick horse and a huge vet bill.

This year Paula doesn't have to travel. Finally, she can get to the bottom of the mystery!

Enlisting the help of a friend, she gets down to some serious detective work. What the two riders discover at the barn is very bizarre and not at all what they expect! 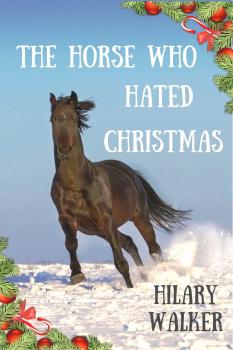 The Horse Who Hated Christmas

Peppi was so mentally and emotionally worn out that she had no trouble at all sliding into dreamland.

Around ten o'clock she awoke to the sound of her mare moving restlessly in her stall. Directly above, mysterious noises sounded over the horse's head and the feed room next to her stall.

Paula wanted to call out to Melissa but was unable to speak.

Peppi began snorting and running around her stall and galvanized her owner into action.

Paula's first priority was to her horse. She found her voice and whispered loudly, "It's okay, Peppi, Mom's here!"

She jumped out of her sleeping bag, threw her heavy duty barn coat over her dressing gown, thrust her feet into her paddock boots. With trembling hands she pressed the flashlight app on her phone.

The animal's petite ears pointed forwards over the stall door at her owner's approach and when Paula went in the horse immediately tucked her head under her owner's arms.

The other horses down the aisle popped their heads out. They were wondering what was going on, but were unperturbed. The din was only over Peppi's part of the barn.

It was easy to understand why she was so upset. The scraping overhead was very loud. Paula could swear it was the runners of a sleigh being dragged by reindeer, whose little feet accounted for the tap tap tap noises as they stomped their cloven hooves in impatience.

She shook her head. This was nonsense! She needed to go outside and find out what on earth was going on.

Giving Peppi one last cuddle she ran back and shook her friend. "Mel! Get up Mel!"

"Santa's landed on the roof!" Paula shone her cell flashlight into her friend's eyes.

"What?" Melissa's eyes were now open she shielded them from the brightness.

"Quick or you'll miss him! Santa Claus is here! Can you hear him?"

"Wow! Yes, I can!" Melissa was now fully awake and throwing on her boots and jacket. Grabbing her own cell phone she said, "C'mon! Let's go check him out!"

But as they approached the exit doors, Peppi gave a shrill neigh. The women looked back and their cell lights revealed a dark figure leaning down into the mare's stall from the overhead rafters.

"We've got to do this!" Paula hissed. She grabbed Melissa's sleeve and dragged her the few feet to the scene of the crime. Poor Peppi was pressed in terror against the front of her stall, trying to get away.

Seeing her mare in such distress gave Paula the extra courage she needed. She shone her flashlight directly into the intruder's eyes.