When Jonah Icicle decides to spend Christmas with his family and introduces his new boyfriend Sandy, everyone reacts differently. His mother Pam is combative, always judgmental to a fault, obnoxious, and loud. Jonah’s sister Willa adores the new man in her brother’s life and feels he will be a key player in their close unit. Willa’s husband Bobo suffers from hypersexuality and unfortunately can’t keep his hands off Sandy. And Jake, Jonah’s brother and Pam’s favorite son, is more interested in his marijuana than his relatives.

As the snow flies and the electricity goes out, the Icicles fight, hug, and laugh. Can they welcome the holiday spirit -- and Sandy -- into their lives?

“Babe, can you get our bags out of the truck?” Jonah asks Sandy, granting his boyfriend a break from the chaos. Two, overstuffed Nike hockey bags are needed for the trip; nothing small and perfectly packed with all of their necessary and queenly essentials: three different types of shoes, makeup for any visible wrinkles, long-sleeved clothes, an assortment of hats, and so many other pieces of attire that probably should have been left at their houses in the city.

Sandy grins and replies, “I’d love to. If I don’t come back in a few minutes, I’m out by the truck smoking.”

It’s one of Sandy’s worst habits, Jonah judges. Sandy does have other bad habits like getting up for work late, not bathing every day, and leaving his clothes scattered everywhere when he sleeps over. Habits that Jonah has become immune to, loving the man for who he is and his differences, even the filthy addiction of smoking.

“Take your time, guy. I understand,” Jonah says, giving Sandy permission to smoke, or whatever the man wants to do, taking a sabbatical from the Icicle family.

After Sandy leaves to fetch their bags, Jonah turns to his sister and asks, “Where’s Dad?”

“Never around as always.”

“Of course. We expect nothing else.”

Bobo says from the sofa, “We’ve gotten used to it.” Then he adds, “Your boyfriend’s handsome. I hope I didn’t overdo his welcome.”

“You overdo everything,” Willa says. She leans over and gives her husband a kiss on his left check. “Just try to leave them alone while they’re here. Poor Sandy doesn’t know your condition yet. Give him a few hours to settle in before we fill him in.”

Pots and pans clatter in the kitchen. Drawers open and close. Bobo rises from the sofa and trots into help Pam.

Jonah asks Willa, “Why’s it so cold in here? And why are the lights off?”

“The power is out. It went off about fifteen minutes before you and Sandy got here. Mom’s in the kitchen looking for candles and flashlights.”

“How long is the power going to be off? Did anyone call the electric company?”

Willa says, “Bobo called them. The power’s going to be out for the next few hours. Some asshole drunk driver hit two telephones in a dump truck and took out transformers on the next block over. Who knows, the power might not be back on until morning.”

Bobo’s a dipshit, Jonah things, but doesn’t say this to his sister. Instead, he simply asks, “What’s going on for dinner?”

“None of us have talked it over yet. We can’t stay here, though. The ham is undercooked and the mashed potatoes will be chunky.”

Sandy enters through the front door with a fresh layer of snow on his shoulders and the case of wine. He smiles at the siblings and jollily asks, “Did you miss me?”

“Of course, we did. More than you know,” Willa says. “Now, put that down and give me a hug. I like you, Sandy whatever-your-last-name-is. No matter what happens the next two days, I will like you because my brother just admitted me to me that he loves you. Twice. You’re his man and he thinks highly of you.”

“My last name is Keye.” Sandy says, placing the case of white wine down, next to a walnut bench in the foyer where visitors can sit and remove their shoes and seasonal whatnots. Before he realizes it, Willa has her tiny arms around his frame, squeezing him.

“Another brother. I can’t get enough of them,” she says. “And such a big one. You definitely work out. Maybe not as much as my husband, but you do.”

Sandy exits the hug, pulls out two bottles of wine for Willa, and passes them to her. “One for you and one for Bobo. It’s from Jonah and me. Merry Christmas.”

In the semi-offered light from the evening and pre-nightfall, Willa accepts the gift. “You’re too kind. Both of you. You’re making this holiday special and I’m glad you’re both here to enjoy it with all of us.”

Willa escapes to the kitchen to help her husband and mother find the candles, flash lights, matches, or anything to create light. Off she goes, leaving Jonah and Sandy alone in the living room, near the foyer. 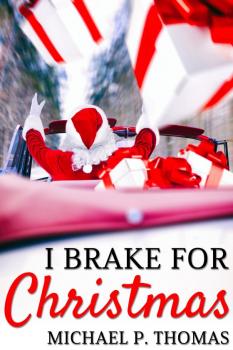 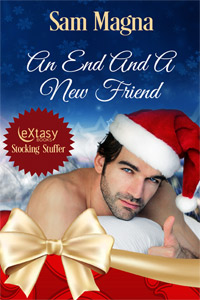 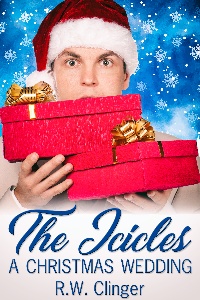 The Icicles: A Christmas Wedding (MM)
R.W. Clinger
In Shelf
$3.99
Tweets by
sirenbookstrand