The Impending Marriage: A Werewolf Romance

Jake Savage and Terry Contralto have been a couple for exactly two months when they get 'the call'.

It's an unexpected one.

"Darling, do you remember that silly little traditional shifter ceremony you went through with Tabitha Polson when you were fourteen?" His mother brays with nervous laughter. 'Turns out that it's binding after all."

Thanks to a clause in shifter laws, Jake must marry the blonde and bimbo-esque Tabitha Polson by January or his father stands to lose his entire fortune, worth almost a million, to Tabitha's Dad. And what about Terry? She is his true mate, the one that he loves - shifter contracts be damned.

There is only one thing that Jake can do. He and Terry must get a million dollars to bail his Dad out and set Jake free of marrying Tabitha. They must hatch a plan so devious (but law-abiding), so clever, and so fraught with shifting, ever-changing alliances, and physical and emotional perils that the odds of them succeeding are a thousand to one. Or more.

Just like its predecessor, you will not have read anything like this shifter romance before! Filled with laughter and fuzzy romance, this book is filled with more twists than a pretzel stick. See if you can spot them coming! 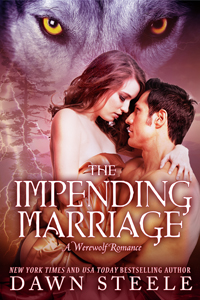 The Impending Marriage: A Werewolf Romance

"We have a full house of guests this weekend. Jake, your brother is here."

Jake immediately turned wary. "He is?"

"Oh, come on. You're gonna let bygones be bygones, aren't you? And we have a surprise for you."

"A surprise?" The guardedness had not left Jake since he stepped out of his mother's car.

"Sure thing. I've invited the Polsons for the weekend. It's time to finalize the proceedings, wouldn't you say?"

At this, Jake's face drained.

"The Polsons?" he said in dismay.

He stole a look at Terry and his heart wrenched. She had no clue this was going on, and truth be told, he didn't think it would get that far either. He opened his mouth to say something to his father. Anything to dispel this charade before it went too far. But a bundle of pink suddenly bolted out of the door and shrieked loud enough to scare all the birds away from the overhead boughs.

Jake took a large, fearful step back but he wasn't fast enough to evade the young woman who threw herself into his arms, knocking the breath out of him.

"Jake! Jake! Jake!" she kept squealing, as if he was a wraith who would disappear into thin air if there wasn't enough noise to keep him there. Between her and his mother, he couldn't decide which was worse.

He couldn't believe it, but she had grown. The last time he had seen Tabitha Polson was in high school. Fuck, had she grown!

Brothers of Were, Goddess of Love (MFMM)
Dixie Lynn Dwyer
In Shelf
$2.99
Tweets by
sirenbookstrand