The Marked is coming.

Levi has heard this a million times, but as Alpha, chooses to ignore it. Yet when he finds a Fae near death, she draws out his protective instincts.

Shayla hopes the wolf pack will find her, as she wishes for a swift death. She aches to escape her marching orders...to kill the Kale Alpha.

Evil casts a dark shadow over the magical world, and no one is safe. Only the Kale Alpha holds the key to reversing the past against a new dictatorship, but will he discover the power to do so in time? Shayla and Levi must fight demonic forces or lose everything… 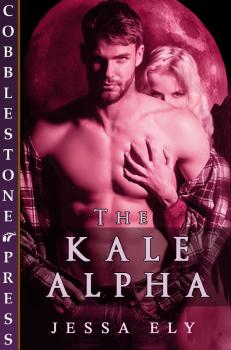 Shayla knew she didn’t have long before discovery.

The ground trembled under her bare feet, right inside the Lycan border as another boom of thunder cracked the sky with a resounding blast. Cold rain pelted her face, slicing against her defeated body. Her dress hung in shreds, her skin nearly as mangled. Patches of her flesh lay open and exposed to the downpour, yet she felt numb, ignoring the sting. The rain had long since washed away the blood, but she knew she still hemorrhaged her life force.

Her eyes crossed in the darkness, and her fatigue sucked her close to unconsciousness. She shook her head, trying to stay awake. Shayla knew she was only seconds away from collapsing. She had to stay focused—she had to keep moving.

Fear drove her deeper into the forest…closer to another enemy. Either way, she knew she’d die tonight, but where would be her choice.

She winced and fought back more tears as another rock jabbed the soft sole of her foot. As Shayla righted herself, her left wing—her only remaining wingsnagged on a tree branch. She cried out, falling to her knees. Her hands dug into the rain-saturated earth, gripping slimy leaves and sticks. Gut-wrenching pain seized her, twisting her with nausea. Her sobs were drowned out by more thunder, but she didn’t care. She was ready to breathe her last.

She had to keep going.

Staggering to her feet, she swayed under the rain and her depleted strength. Shayla wouldn’t last much longer.

Dropping to her knees, the ground took her weight. She couldn’t go any farther. Dizziness weighed her down. “Come kill me,” she whispered into the night.

She could feel them.

Three sets of yellow eyes glowed fiercely within the dense thickness of the forest. A strange sensation fell over her, not terror nor fear, but peacefulness. A beautiful calm. Two wolves eased out from behind the trees, their teeth bared, and the hum of their growls threatening and harsh. Taking a deep, satisfied breath, she knew death would accept all her pain, and silence would shroud her in the afterlife.

She’d no longer be a victim of circumstances she couldn’t control. She wouldn’t be a puppet for anyone to dominate. Not anymore.

As the wolves circled, her vision blurred. “Do it!” She seethed with her last bit of strength, collapsing to the ground. They snarled and snapped, their bodies so close she could feel their heat.

Shayla shook hard. Stinging stabs pricked her chilled flesh, as drowsiness took hold, pushing her closer to a cloudy stupor. She didn’t have long as her head hit the soggy, muddy ground.

She knew she’d found the Kale.

They would finish her off and she’d be free. As her eyes connected with the Alpha, a strange surge rendered her powerless…and darkness covered her.

The stench of evil hung in the air.

Taking a deep breath, Levi found the foul odor offensive, making him angrier by the second. He could feel a corruptive sensation eating through his veins. It burned like a scorching sun, blistering and damning.

He shifted into his wolf form.

Immediately, energy surged through his body, feeding all his senses. He could hear beyond the raindrops and thunder. He could feel beyond the wind and the cold. There was a nasty foreboding that even the rain couldn’t wash away.

His pack’s resident Faery, Cassius, kept predicting a red moon, but how many times had he’d scoffed at her premonition? Over and over, she said, “The Marked is coming,” but he told her they were finished with the Fae, and to forget her previous life. However, she was a stubborn Fae, full of her religion and priestess ideals. She was the only exception of their past life he allowed to remain. She had helped them escape, and for that, the pack would be forever indebted to her.

One quick glance at the sky revealed the moon, dripping in red. He wouldn’t tell Cassius. Knowing her, she’d start spouting weird shit on prophesy and death.

The Kale no longer subscribed to the Fae guardianship. The pack was no longer theirs to command. Trevin saw to that years ago. The demon master took all the peace and serenity between the Kale and Fae. By the lycanthrope’s way, they were the caretakers of the wilderness, masters of the wild, and protectors of humanity. However, they were no longer subservient to any creature, magical or otherwise.

Beau and Kason—both excellent hunters and warriors—ran beside Levi toward the Fae-Lycan border. He knew they could feel the evil as he did, but neither questioned his need to patrol their borders. They knew something was coming and they were ready to combat whatever strange entity they encountered.

Levi ran hard and fast, pushing himself toward the unknown intruder. The damp forest ground was nothing as he flipped dirt clods up in his pursuit, leaping over fallen logs and rocks. He darted through the trees, his vision clear and knowing. The woods were his playground, his domain. Whatever invaded his territory, he’d drive out…or kill.

He could hear the breath of the intruder. Faint, but definitely there. The closer he drew to her… Her? Yes, she was definitely female. She smelled like lemons, yet he detected blood. The distinctive, metallic aroma was unmistakable. It wafted over the wet, chilly air, and Levi knew by the sweet sting of her essence and waning life force, she wasn’t human.

His blood seethed with hatred for her fucking audacity to cross his boundary, but the feeling left him quickly. She was wounded. But Levi didn’t care. He didn’t have the time or the inclination to care. He was the Alpha with a pack to protect. All he could hope to offer was a swift death and to bury her deep. She couldn’t hope to expect anything more. His policy remained unswerving and firm: Death to all Fae.

The trees whizzed past as dark, ghostly sentinels, standing guard over his land. Everything about this place belonged to him. Each rock. Each stone. Even the water from the sky. He owned it. He commanded it. He wouldn’t bow to another Fae. Times had changed and Levi wasn’t the same in thoughts or beliefs.

He’d kill anyone or anything before he risked his pack. Simple.

The closer he drew to her, the more he could sense her depleted emotions and weakness. This kill would be easy.

She lay on the ground, a shredded heap of torn flesh. The rain made it easy to see her injuries. The Fae female was nothing but death waiting. One wing was torn off, and she was dirty and slimed from the earth she rested on. Her hair was tangled with forest debris. The faint thump of her heartbeat slowed even more, a sign she wasn’t long for this world.

Goddamn, she’s fucked up bad, Beau blasted through their pack mind link. I’ll kill her! The red mixed gray of his fur slithered by, a flash of haunting growls and snapping teeth.

Karson circled around the wounded Fae from the other side. Make it quick, brother. It’s shit-assed cold out here.

Beau glared at his pack mate. Pansy. You’re such a girl. Grow a pair, motherfucker. The gray wolf snarled, swiping a claw in his direction.

Enough! Levi pressed out to his pack, still holding his position without moving. Finish her.

The Fae lifted her head from the soggy earth. Her eyes were vivid green in the darkness, shocking and gut twisting. A strange power tunneled through Levi, seizing his heart and blood.

Her voice projected more strength than her dying body. “Kill me!” she gritted out.

The impact of her tone immobilized him. With only two words, she banked a fire in the blackness of the Alpha’s soul. A searing kind of energy traveled his veins, causing him to whimper a threatening growl. Neither pack mate heard him, intent on carrying out his death order.

However, something changed in Levi, sucking his sanity with it.

Golden heat filled him and time suspended, pushing the Fae’s image into his mind. In the vision, she stood before an arched window… Her beauty ripped him raw. It festered. Hurt. She was a stab of pain. From the delicate turn of her jaw to her full pouty lips, she seared his awareness. Her long, white-blonde hair hung to her waist. She was gifted with arched, dark brows and stunning green eyes that would rival emeralds. Beautiful black wings arched over her pale, white skin, a testament to her rank and position. She was a Nyx Fae…born of the night. They were extremely rare and looked upon as a blessing.

Why the fucking hell was she here? Neglected and nearly dead? They were usually locked away in the Fae priestly high towers, and kept pure while used for their magic.

He didn’t have time to contemplate more as Beau’s claw rose.

No! Levi leaped from his position, sailing through the air. He couldn’t stop himself. He was no longer in control as the overwhelming desire to protect her twisted deep inside him. As he landed, Beau’s sharp, curved nails dug deep into the Alpha’s side. A screeching moan tore out his throat, and he fell atop the injured Fae.

Beau sank to the ground, bowing. Alpha, forgive me! He whimpered, whining his remorse. Karson backed away too, his shoulders sunken low. Neither wolf wanted to face the Alpha’s wrath. Each backed up more.

Levi snapped his disapproval, howling up into the night sky. The rain pelted his canine face, while pain zoomed through his body, white-hot and blistering.

She’s mine! He growled in the empty recesses of their minds.

His pack mates eased back farther, shaking, and wailing their distress. He didn’t care, nor did he explain, ignoring them. As soon as he knew they wouldn’t harm her, he eased off her, dismissing the pain in his side. He’d heal quickly.

Levi shifted into his human form, dropping to his knees. The icy rain pelted his naked skin, droplets steaming against his excessive body temperature. Reaching for her delicate shoulders, he carefully rolled her over, brushing filth from her face, so careful as not to jar her into more agony. The feel of her skin was liquid pleasure. Satiny and smooth.

He felt her deep.

She soothed the beast tearing at the edges of his sanity.

It was the Pairing.