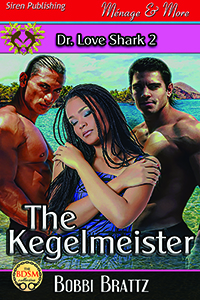 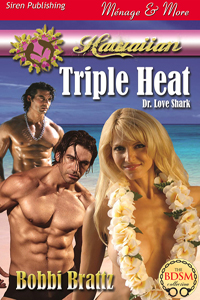 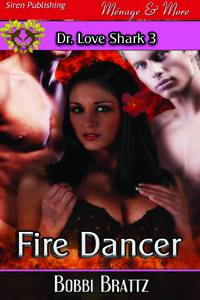 Piers stood at a podium in the studio. The focal point in the room was a king-sized bed that was made up with plush pillows, cushions, and satin sheets. The ruby-red and black combinations were incredibly sexy. Tara watched from the front row, surprised at how comfortable he was in front of two hundred sex-hungry females.

There was a thick mat on the floor in front of him where they would practice their exercises. The lights were bright, taking the mood away from the sinful scene.

A woman called out, “I’d like a volunteer to hel—”

“I’ll do it,” Tara called out then jumped to her feet so that he couldn’t refuse her.

Piers was almost quick enough to hide his frustration, but Tara caught the guarded look. As she moved to his side there were murmurs from the audience. Dressed in a skin-tight tank top and boxers covered with a Hawaiian print, he was delicious to the eyes.

“Thank you, miss.” His tone was barely shy of disdain.

“Uh.” Piers seemed at a loss for words for a moment then snapped out of it, took a deep breath, and sighed. After clearing his throat, he nodded at her then faced the audience.

“Many of you might wonder what Kegels are. Take a look at the diagram of a woman’s pelvic area on the projector screen.” Piers pointed at one section of muscles. “This is the PC or pubococcygeal muscle. It resembles a hammock. This is the muscle you use to try and stop the flow of urine in a leaky bladder, or to hold back a fart.”

The audience laughed at his outrageous comment, breaking the ice. Tara watched as he loosened up, pleased at his response to her. I’ll have him in no time. He’s so hot!

Piers looked uncomfortable with her standing beside him, but Tara found that she liked the way he tried to ignore her while being forced to use her as his model. She inhaled his scent, her stomach doing a flip as she moved closer to him. She almost laughed aloud when he took a step away from her. He’s delicious. Mmmm, he smells like fresh Hawaiian air and spice.

“Doctor, why is it that women aren’t supposed to fart, while men do it all the time and it’s supposed to be funny?”

When Piers froze then turned his head to stare at her in surprise, she almost laughed aloud. His deep-brown eyes held a look of confusion at first then captured a spark of fire that flew, releasing flecks of gold. Hiding a satisfied smile, Tara fought to keep a false look of query in her expression.

His well-tanned face darkened with a flush for a moment, but he recovered quickly.

“We’ll go into that a little later.”

As Piers continued with the class, she watched him, sure that she was making him uncomfortable. She couldn’t wait until they were back at Mateo’s house and she’d have him all to herself.

“You can practice tightening your Kegels anywhere, anytime, and no one would know. We are here to learn how to strengthen those muscles that become weak after childbirth, with age, and with obesity.”

Tara seized the moment he stopped talking, and practically purred. “Doctor, I’d love to tighten up those muscles. I understand it makes your sex life a lot more fun.”

She nearly burst out laughing when his eyes widened a little, and he swallowed hard. Once again, he pulled himself together and cleared his throat, but this time he kept his eyes on the class.

“Yes, Tara, Kegels do help your love life. Now, I ask that you all hold your questions until the end of the session. We’re going to discuss all elements of the Kegels and learn more about them through counselling and sex therapy classes.”

This time, Tara gave a low, husky chuckle and said, “Oh, yeah, I can’t wait for that part!”

The women in the class laughed and Tara did a curtsy.

Piers sucked in a deep breath, his lips tightening as he stood unmoving at the podium.

“That will be all for the day. Please make sure you sign up for Yoga and the gym sessions.”

Turning abruptly, Piers left the room through the change room door, leaving Tara on stage. She smiled and winked at the audience, bringing more laughter.

He has no idea how well I can do in sex therapy.

It was time to tease the tiger.

Though Tara knelt on the soft carpet, she found it difficult to remain still and quiet. Piers and Kona were on the bed, but she wasn’t permitted to look up at them. She knew it was Piers who made her stay put. He was trying to make sure she understood who was boss in the bedroom. Frustration caused her to squirm, and he noticed right away.

“Slave girl, you will not move, is that understood?”

Resentment burned in her veins. Being a submissive wasn’t as easy as it sounded.

When I have him in my room, he’s going to wish he’d treated me a hell of a lot better.

Tara schooled her features, trying to fake submission. Somehow Piers knew what she was thinking and he wouldn’t let her go. She was about to leave and be damned with it when he said, “Come here and climb up on the bed between us.”

She was surprised they hadn’t made her use the Ben Wa balls. He seemed bent on making her uncomfortable.

“You will say ‘yes, Master’ when I tell you to do something.”

Unable to stop it, her eyes betrayed what she was thinking. The thought of being whipped again turned her on already, yet they didn’t have any “toys” on the bed.

Once she was lying on her back, he leaned over and studied her eyes. By the frown on his face he wasn’t pleased with what he saw.

“You are determined to be punished, aren’t you, slave girl?”

“No, Master,” she hissed, allowing her attitude to show.

Kona laughed. “She sure is a stubborn one.”

“Yes, she is. What should we do to make her submit like she’s supposed to?”

“What we usually do, make her wait for release until she begs us.”

Fury made her lose control of her tongue as she shouted, “I’m not¾”

“Silence,” Piers snapped. He was taking his role seriously.

She closed her eyes and tried to relax though her whole body was trembling in outrage. Before she could sit up and leave the bed, Piers put his hand on her shoulder and held her in place.

“Are you going to run like a coward as you did last night?”

He didn’t appear to be mocking her, but the serious tone of his voice warned her that he was getting angry, too. Tara closed her eyes and forced her breath to slow, her body to respond to her will. Piers knew how to push the right buttons on her. There was no way she was going to beg, or so she hoped.

Oh! I want to punch him in the nose. He’s so arrogant and demanding.

Piers smiled, though it was with anything but pleasure. He bared his teeth, his eyes like chips of ice.

If he didn’t smell so damn good, I’d kick his ass out of bed. Tara was livid and having a hard time hiding it, and he knew it!

“You will beg, slave girl. I guarantee it.”

Before she could finish, Piers seized her lips and claimed her, his tongue seeking entrance. At first she resisted, but soon melted under his command, every muscle in her body turning to mush. He held her chin in one hand, keeping her imprisoned though she didn’t want to escape.

Kona kissed her breast, worrying the tender nipple until she cried out into Piers’s mouth. She felt Kona’s hands roving over her tender skin, sending waves of sensation to her core. She was taken by surprise when he slipped a finger into her pussy and found just the right spot to make her want to beg for more but she fought it, tears coming to her eyes.

Now I know what Piers meant about me begging. I’m not going to lower myself to—ahhhh, shit! That feels so good.

Another finger entered her, making her hips rise off the mattress. She was getting close to climax already, but just before she could crash over the precipice, they stopped. Panting, she lay as still as she could and waited an excruciatingly long time for them to say or do something, anything!

“Are you ready to beg us, slave girl?”

She shook her head, unable to stop the trembling. When he gave her a predatory smile, she shuddered. How was it possible that two men could have such control over her? She still tried to appear unaffected by the kisses along her neck and chest as they started again, moving along every inch of her body until she was squirming head to toe.

“Use your Kegel muscles to trap my fingers,” Kona murmured, stroking her pussy once again. He put in a second finger, stretching her gently.

“Don’t close your eyes. I want to see them,” Piers whispered, wrapping her braids around his fist.

He didn’t kiss her again, which made her nearly mad with want. With her hair trapped, her body a willing slave, she couldn’t move for fear they would stop. Kona was doing marvelous things to her as he explored her channel. When he hit a spot within, she went wild, wanting, praying he’d continue.

“I’m going to enter you now, slave girl. You have only to say one word and I’ll stop. Do you remember it?”

“Yes…Master Kona.” Her voice was husky, like she’d just swallowed brandy. Tara wanted all of him, and Piers, too, though he remained aloof, kissing her breasts but watching her eyes. Suddenly, she realized he was looking for something. Surrender, that was what he wanted. Well he isn’t getting it.

Once Kona slipped on a condom, he spread her nether lips gently and placed only the head of his cock at the entrance. She tried to push down to take him, but he held down her hips.

She nodded her head, but he wanted more from her. 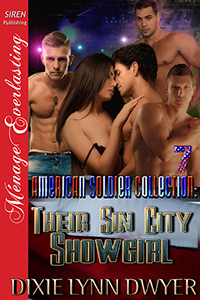 Seduced by Her Two Masters (MFM)
Berengaria Brown
In Shelf
$3.99
Tweets by
sirenbookstrand