Gabe just wants to spend his Saturday night playing video games and drinking, until he's pressured by his wild friend Jason into chilling with Brad, a mostly-straight hunk they both know who's looking to buy some pot. Gabe reluctantly drives Jason to Brad's apartment, where he immediately feels ill at ease.

Brad only makes things worse by informing Gabe of the brutal murders committed years ago in his apartment. The hunk tells the guys about a keysmith who made copies of keys from all around the city and then let himself into homes to murder families while they slept. It's the reason Brad's apartment is so cheap.

While Jason sells Brad pot and gets him in the mood to screw around, Gabe is left alone in the creepy apartment. He hears little girls laughing in the attic and thumping at the windows. Maybe it's just the drinks and drugs playing games on him, or maybe the Keysmith has returned for more victims. 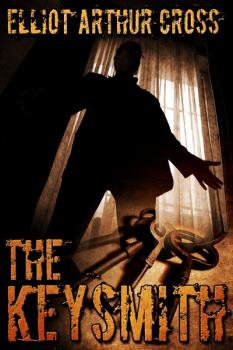 “Live a little,” Jason said, desperation creeping into his face. “You're hot, I'm hot, Brad's hot. It'll break you out of your funk.”

“When do you want to go over there?” Gabe asked, wiping sleep from his eyes. He glanced at the clock and saw that it was well past ten at night.

“You're lucky I'm not working tomorrow,” Gabe said. He'd certainly shown up at drunk at the shipping plant but he always got a few hours sleep beforehand. Maybe having the day off was a sign that he should go over to Brad's. “Fine. Give me five minutes to get ready.”

“You even know where his place is?”

“Yeah, it's on Bloods Point Street.” Jason hugged Gabe and then bounced out of the room. “I'm ready when you are.”

Ten minutes later, the two hopped into Gabe's silver El Dorado and headed through the quiet city streets. Gabe followed Jason's poor directions and only took two wrong turns on the way to Brad's place. They ended up arriving at a run-down apartment complex in a dirty section of town. The nearest streetlamp was busted, leaving the walkway dark. A dog barked somewhere down the street, sending a shiver through Gabe's spine. Something didn't feel right about any of this, and he worried Jason was pranking him somehow.

“No one's going to take this piece of shit,” Jason responded. Gabe had to agree. They locked the doors and approached the apartment door in the dim light.

“I am going to regret coming here, aren't I?” Gabe asked.

“Your dick won't,” Jason said with a giggle.

The front door was propped open and Gabe couldn't shut it behind them. The carpet was badly stained and there was a smell in the tight foyer that lead to various apartments. Gabe sniffed the air and immediately regretted it. He couldn't place the odor, but it wasn't pleasant. Gabe eyed the brown doors in the lobby and noticed scratching coming from one of them. He took a step forward, curious, but Jason tapped his shoulder.

“Up here,” Jason said, as he led Gabe up the creaky stairway, past colored windowpanes and cellophane-wrapped banisters.

Jason knocked on the door at the top of the stairway. After a second, it swung open and Brad greeted them.

Gabe followed Jason inside, his dick twitching at the sight of Brad. He was six foot two and walked with an almost arrogant stride. His raven hair was cut to nearly an inch around his head and he wore a small gauge in each earlobe.

The apartment looked old and well-lived in. Brad led them to a living room with cigarette burned furniture and a TV on a crooked entertainment stand. Brad wore a silver necklace that dangled over a black T-shirt and torn bluejeans. He held a beer in one hand and tossed one to each of his guests.

“So this my shithole,” Brad told Gabe. “I'd move, but it's a pain, and the landlady mostly leaves me alone.”

Brad cracked his beer open and lit a cigarette during the awkward silence.

“What do you mean?” Gabe asked, as goosebumps crept across his forearms.

“Like a decade ago a family was hacked up here,” Brad said with a shrug. “People complain about weird noises or whatever, but I think it's just the old floorboards.”

“Oh ...” Gabe looked around, over his shoulder, but Jason just looked bored.

“Yeah, my landlady told me all about it. I think she gets off on it or something. This guy worked at a store and made copies of keys. I guess he decided to make extras for himself. He let himself into a bunch of places and killed a dozen people. One night he came in here and murdered the parents and their two daughters. The neighbors heard keys jingling up the stairs from all the copies, and five minutes later a bunch of screaming.”