Billy, a high school senior, has lost a lot in the past year, including his younger sister, Sara. Billy lacks excitement and purpose in life until his curiosity takes him and his best friend, Connor, to an old, abandoned landfill along the river. Connor would rather forget the experience, but Billy can’t help but feel invigorated by their findings. Taking it upon himself to uncover the mystery, Billy finds his life coming full circle – but is that a good or bad thing? 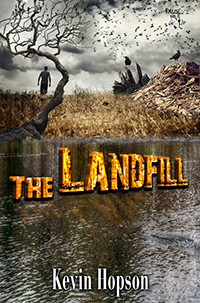 “You feel like being adventurous?” A rare burst of energy came over Billy.

“Maybe,” Connor replied with a drawn-out voice. “What are you thinking?”

“Take a left up here on River Road.”

Connor perked up, slowing the vehicle and making a left onto the road. “You actually want to hang out at the river?”

“Then where are we going?” Connor turned to look at him. Billy could tell his friend was putting the pieces of the puzzle together. “Wait. We’re not going to that landfill, are we?”

“Yeah. Why not?” Even with what his father had told him, Billy was captivated at the thought of checking it out. “Let’s do it,” he said with excitement.

“We don’t even know how to get there.”

“This road runs parallel with the river,” Billy commented, “and it can’t be more than a couple miles.”

“All right,” Connor said. “I’m only doing this for you, though.”

A few minutes passed and Billy continued to watch with eagerness, waiting for a sign as to which direction to go. He noticed a light making its way through a small forest of evergreens to their left. The source of illumination came from an elevated position, possibly atop the nearby hill. Billy scanned the area in front of them as well as the trees off to the side.

Connor brought the SUV to a crawl.

“It has to be over there.” Billy pointed to his left where the light shined through the tops of the trees. “Do you see a road that goes up there?”

Connor stopped the vehicle. “I don’t see anything but woods.”

“Do you have a flashlight?”

“I’m going to get out and take a look,” Billy said.

“In the glove compartment,” Connor noted.

Billy snatched the mini flashlight from the glove compartment and stepped out of the vehicle. He left the door open, making Connor visible inside. Shining the light along the edge of the pavement, Billy spotted a crude road. Made primarily of dirt, it curved through the forest like a serpentine and didn’t appear to have any guardrails.

“Put your brights on,” Billy said, easing back into the vehicle.

Connor pulled a lever on the side of the steering wheel, enhancing the view in front of them.

“There’s a dirt road up here on the left.”

“You sure this is a good idea?” Connor asked.

“We should be fine then,” Billy said.