The Lawman, the Badass & the Songbird (MMM)

The Lawman, the Badass & the Songbird (MMM)

The door to the bedroom opened and Tim stepped in, essentially blocking him. They stared at one another, but he could tell from Tim’s resigned expression that he wasn’t going to stop him, wasn’t going to argue with him. And, maybe most importantly, the words “I love you” weren’t leaving the man’s lips. So, he’d been right.

Driving under the influence of heartbreak should have been against the law. Bobby could barely stand the pain of it as he drove into town. Tim had made no move to prevent him from leaving. But that had been part of their agreement. Either of them could end their relationship and the other wouldn’t try to physically stop them from doing so.

Bobby didn’t know where he was going to stay. He sure as hell wasn’t going home to his parents. Life with them had been terrible and it was one mistake he wouldn’t repeat. He would need something permanent. Finding an apartment, however, would have to wait until morning.

He headed to the motel with the cheapest rates and took a room for the night. The clerk eyed him curiously, but didn’t ask where Tim was. Everyone knew everyone else’s business in Silver. The fact that he was staying alone at the motel would be around town by morning.

After dropping his bag on the bed he looked around. The place was clean. It even smelled clean. But it wasn’t home. Sitting down on the end of the bed, Bobby lowered his head into his hands and wondered what he was going to do without having Tim in his life. The guy had done a lot for him. Bobby had been a mess, always getting into trouble, having no future to speak of. They had talked a lot about him getting a college education. His grades in school had been fairly good. It was the one place he could go where his parents couldn’t harass him. Well, they had tried occasionally, but the principal had kept them off the property.

Glancing at the clock on the wall he saw that it was only eight-thirty. It was too early to go to sleep. Pushing off the bed he put the room key in his pocket and headed out. Another thing he would have to get was a cell phone. The one he’d had was one Tim had given to him. He had left it on the nightstand in Tim’s bedroom.

Everything inside Silver was within walking distance. The motel he was staying at was on the outer fringes, but that still meant he could reach downtown within fifteen minutes. Though he wasn’t in the mood for food, his stomach was being contrary and grumbling in a demanding manner. He walked past two fast food places, heading to a diner in the square which made the best sandwiches around. Roast beef smothered with horseradish and a pickle on the side would be enough to tempt him to eat. He walked past Vinnie’s Pizzeria, where Tim had ordered their pizza. It would probably be a while before he had pizza again.

Bobby kept walking until he was in the square. He stopped on the corner and looked around. There might have been a lot of times when he had wished that he was anywhere but the small town, but he knew that he would never leave Silver. There was a magic about it. It had an aura of positive energy which seemed to fill nearly every citizen. It was a good place.

He wondered about the men who had founded the town over a hundred years before. They had been searching for a place to begin again, to live their lives as they wanted. They were all gay and had been determined to make the rules for once. What they had bravely created was special, a town where bigotry was frowned upon, welcoming those different from what was considered normal. The present day Silver was a place where there were many kinds of relationship groupings. It wasn’t unusual to see a woman walking down the sidewalk with three men. And that was just the beginning. What it boiled down to was no one was considered an outsider for their sexual orientation, the color of their skin, their race, or their religious beliefs. Even the straight, monogamous couples were accepted, he thought with a chuckle.

Finishing his sandwich and soda, Bobby paid for his meal and left the diner. He wandered along the sidewalk, trying not to think too much about what he had just given up. He supposed thinking of Tim would last a while. The man had been his first lover. He had been in love with him since a teenager and had dreamed of things which had seemed impossible at the time. The handsome older man and the naïve teenager had been big in his mind. Yeah, his fantasies had taken him a lot of places. But they had all ended with Tim loving him forever.

The squeak came out as Tim reached for Rory and wrapped his fingers around the delicate wrist. He pulled him down onto his chest and over Bobby’s thighs. “There’s no audience here. Either leave or participate.”

It was obvious Bobby had no qualms about the other man being in the room with them, on the bed with them. Tim wasn’t about to ignore his growing desire for Rory. He wanted to explore it, right here and now. A glance up at Bobby told him that the man was all for adding a third to their play. His blue eyes were dark, like sapphires, filled with lust and desire. Their relationship was morphing into something completely unexpected. Whether it was something he would want on a permanent basis was yet to be seen. But it would give Bobby a chance to explore a part of himself that he might not have known existed. It was better to learn about it now, rather than later, even with the unexpected upheaval in their relationship.

Rory tugged and Tim released his wrist. It seemed he needed two hands to peel off the shiny bronze cropped top. It went flying. Tim’s breath caught in his throat as his gaze roamed over the smooth skin. It was the color of coffee with just a drop of cream added. His mouth watered for a taste. Dropping his gaze lower he saw that the man’s cock was about ready to rip through the fancy, body-hugging boy shorts. Heat flashed through his body, anticipation burning. The tips of his fingers dug into Bobby’s flesh as he anticipated fucking Rory.

A brilliant white smile flashed. “You don’t have to tell me twice,” Rory said with a giggle, sliding small hands down over a toned body. “Just so you know, I’m squeaky clean.”

“Good to know. You wouldn’t happen to have scarves, would you?” Tim asked him, an eyebrow lifting at the inquiry.

Throwing back his head, Rory laughed merrily. The sound went straight to his dick again. “Honey, I can supply you with enough scarves to tie up every citizen of Silver.”

Once Rory ran out of the room, Tim looked up at Bobby. His hand was still gripping his lover’s hip. “You like him, don’t you?” The color spread across Bobby’s cheekbones. He nodded jerkily and his gaze shifted from Tim’s. “Hey, honesty here. I know we’re having problems. I still haven’t figured out what they are, and I know you want me to, but this thing with Rory is something completely separate.”

Bobby’s chin lifted a little, reminding Tim of those years before they finally gave in to their desires. There was attitude there in the tilt of his head, in the glint in his blue eyes. Bobby might not believe it, but Tim was glad to see it. That meant there was still a spark, a fire deep down where emotions were held in check. He wanted to release those emotions, wanted to see them spill out. Tim had never intended to quench those fires. He was not a man bent on crushing a sub’s will or their spirit. That was not what his domination was about. Bobby’s fire fed his own, but it had faded the past couple of months. Perhaps that’s why things had gone awry.

With a twist of his longer body, Tim had Bobby beneath him once again. He smiled in a way which had Bobby swallowing hard. “Pants off,” Tim told him as he got off the bed and began undressing, his eyes never leaving his wayward lover.

Bobby kicked off his shoes and wrestled with his belt and zipper. The jeans were pushed down over his hips, his underwear sliding with them, until he was kicking them off his legs. Tim admired the man’s body, from the broad shoulders, rippled abs, to the muscular thighs. His rounded, muscular ass was enough to drool over. And he would, later.

Rory returned just then, an assortment of colorful silk scarves hanging from his hands. He waved them excitedly, almost causing Tim to laugh. What the hell was he thinking? It was madness to get involved with the beautiful little queen.

“Take those off.” The boy shorts came off in the blink of an eye. “Get on the bed, face down, hands behind your back.”

Rory’s eagerness had Tim’s cock throbbing double time. Having the two men on the bed together was tempting him in a manner he had never felt before. It surprised him in some ways. In others, it just seemed like a very natural thing.

Tim admired the small feet, the slender, shapely legs, the smooth balls and rounded buttocks. Rory was exquisite, like a jewel. His gaze shifted to Bobby, who was stretched out on his back, his fingers wrapped around his cock. Their gazes locked. Tim arched a brow and Bobby’s hand fell away from his turgid flesh. Pre-cum dribbled onto the flat stomach, pooling. Tim inhaled the scent of his lover. There was nothing like it. Leaning over him, he licked the cum away, his tongue dragging slowly over hair-roughened skin. He heard Bobby’s sharp intake of breath just before he bit the man’s skin hard enough to hurt, but not hard enough to do damage. Bobby moaned and his hips bucked. 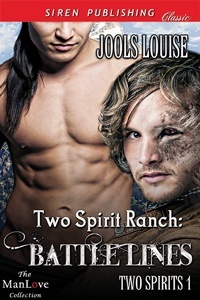 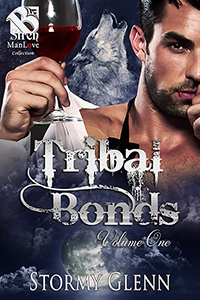