The Leasing of Lindsay

Chad’s new assignment is make sure that top client Max has everything he wants: dinner: nice restaurant, ambiance, and a hot model/escort. Chad’s solution to not being a third wheel--take his wife Lindsay along, posing as Chad’s hired escort. Chad will be able to charge the cost two hookers to his entertainment expense account—and pocket the difference.

Chad didn’t anticipate that his huge black client would demand a swap of escorts for the second round. Lindsay has no choice but to play it out. But first night with a black man is only the beginning. Conner has much more in mind for Lindsay. 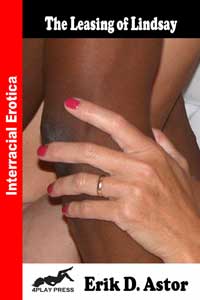 The Leasing of Lindsay

There was a long silence from the bedroom and Chad moved back to the couch near Norah. His knees were weak. At least the ordeal was over. Now he could take his wife home and maybe they could act like this had never happened. It would never happen again.
The door knob turned. Max appeared.
“Chad, I’m gonna keep the brunette for the rest of the night and leave you and Norah with it. Damn, never seen a white girl want black dick the way she does. You want to get Norah taken care of, take her home, get another room, whatever, I’ll cover it.”
Max extended $500.00 in five 100 dollar bills to Norah. “Here’s a tip for your trouble girl. Maybe we can spend some more time together again, but this girl in here ain’t ever had no black cock before. I’m gonna make a project out of her tonight. This one will turn her to the dark side for sure.”
“What?”
“She ain’t never gonna want anything but black dick by morning. I guarantee it,” Max said. I’m gonna fuck this ho on every piece of furniture in this damn place tonight. Got to make the girl’s first night of black dick one she will never forget.”
Chad started to object. He looked over at Norah already pulling on her clothes. He raced through options in his mind. He couldn’t very well say he had been lying about Lindsay being a hooker when this guy was going to be the new owner of the company.
He could see his wife nude, standing in the doorway, looking at him. As their eyes locked she nodded, mouthing the words, “It’s OK. I love you.”