Bran Coffee finds himself stranded in a blizzard on the way to his clan’s Yule gathering. As a bear he likes to sleep the longest night away, so he finds himself a spot out of the wind where he’ll be safe. When he wakes, he finds a stranger waiting for him, but before he’ll find his clan, he’ll discover new love and break the lonely chains binding a dragon from the world he’s forsaken. 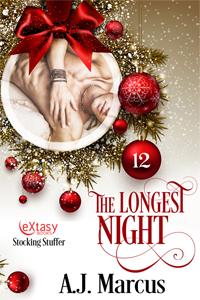 Bran Coffee hit the steering wheel a little harder than he intended, leaving a small dent in the metal. He was instantly thankful he’d modified the truck and didn’t still have the plastic wheel that had come stock, he’d have broken it into several pieces. With a deep breath, he pushed the bear inside him down. It wouldn’t do for him to lose it on the side of the road. It was bad enough his truck had broken down. Glancing in the rearview mirror, the sun was rapidly approaching the western horizon. There was no way he was going to make it the fifteen miles it would take for him to get to the cave where his clan held their annual Yule gathering. Like most bear shifters, he spent the time of Yule immersed in his animal side. It made life easier the rest of the year. He hadn’t missed a Yule gathering in years.

Deep inside him, his bear growled. It was ready to be let out. Getting mad about the truck breaking down wasn’t going to help keep his beast at bay. “Fine.” Bran opened the door and got out. The forest was thick, only the east-west road cut through it for miles, but he wasn’t far from a rocky outcrop at the base of the closest mountain. Maybe, if he was lucky, he’d find a cave where he could shift and then sleep through the night. There weren’t many animals that would bother a sleeping bear in the winter. Waking a hibernating oneform bear was dangerous enough. Nothing would bother a bear shifter since their scent was a mingling of bear and human.

A light snow started as Bran hiked through the woods, heading toward the outcropping. He shivered, but there wasn’t anywhere he could stash his clothes and have a hope they wouldn’t be buried under the heavy snow the thickening clouds promised. To help push some of the cold back, he let his bear out a bit, but not enough to fully shift and shred his clothes. He liked the leather jacket he wore and didn’t want to have to find and break in a new one.

The snow grew heavier as he reached the outcropping. It looked like solid granite, but he worked his way around, climbing across roots and boulders that would’ve kept a normal human away from the area. While he was scrambling over the top of one of the larger boulders, Bran discovered a huge hole that led down into the mountain. He paused and stared into the dark depths. It might’ve been the deepening twilight, but he couldn’t see the bottom of the hole. With a heavy sigh, Bran prowled around the edge of the opening, trying to find an easy way down. The way his luck had been the past week, he’d jump down there, and then get stuck and have to hope one of his clan came looking for him when they found his truck abandoned on the road.

On the far side of the hole, slightly around another outcropping, the rocks were rough enough, Bran thought he’d be able to get down if he used all fours. The wind had picked up and lashed the snow against him as he quickly pulled off his clothes and rolled them into a bundle he could carry in his mouth after he shifted.

After a brief surge of power while he let his bear come roaring into the storm, Bran picked up his clothes in his teeth and started down the rough wall, into the cavern below him.

As he worked his way into the darkness, the smell of snakes filled his nostrils. He shook his head. He wasn’t fond of snakes, but as a bear shifter, he didn’t have to worry about getting bit and dying. They had more to worry about from him. With the darkness engulfing him, his nose was the only thing he had to rely on. It was too dark to see, even with his enhanced vision. As he concentrated on finding the right claw holds to make sure he didn’t go crashing down, Bran couldn’t help but sniff and follow the trail. It came from one snake. One very large snake, but there was a subtle difference from the rattlesnakes he was used to. He wasn’t sure what those differences meant, but he decided to worry about them later.

The wall he was carefully scaling, bent, twisting to the side, like he was suddenly moving across a ceiling as opposed to a wall. Bran clung to each rock he found that was big enough to hold his weight. Every so often he’d dislodge a small rock and listen as it plunked to the floor beneath him. It didn’t sound very far away, but he wanted to make sure he could find his way out. Dropping to a floor, even twenty feet would make it hard for him to follow his scent out.

By the time he finally reached the cave floor, Bran’s paws ached. He’d never had to work so hard to get somewhere in his life. The rough rocks had dulled his claws and he wasn’t sure he’d ever get the dust out of his nose.