The Magical Stones of Pharr

The Eight Lands of Pharr are in trouble, and the only ones who can help are a young princess and the sister she believes lost. They hold two of the four Magical Stones, created long ago by an Ancient Mystic to channel the magic of his bloodline.

But when an evil witch named Patadora Coggs seeks to control the Stones, the two girls must join forces to save their unsuspecting world.

With them is a motley crew gathered as they travel to retrieve the remaining two Stones. Airk Ranon, cynical Weapons Master. The Baret Wray and First Commander Dungan Weir, who command King Randel's army. Elke, a centurion who has never been away from home. Skotak, an Emini Plainsman who provides steeds for the travelers. Dreux, a young prince seeking adventure, and his lover, Estelle. And Kitt, a young orphan held enslaved by pirates.

Chased by Patadora's Maelnords and her own shapeshifting daughter, and by the infamous Weapons Master's outlaw reputation, the young friends travel land and sea in their quest to find the last two Stones. Once they have the Magical Stones of Pharr in their possession, they must travel to the witch's lair and end her evil reign of terror. 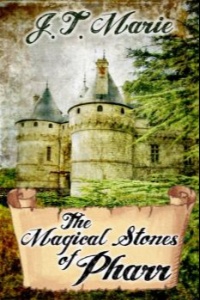 The Magical Stones of Pharr

“Jaelin, Shaela is your older sister, the one your father told you about before your abduction. Shaela, you’re the eldest child of the Andersian king, Randel. As a child, you were taken by a nursemaid employed by the wicked queen, Patadora Coggs. The object was to bring you to the continent of Orizaba.” The Ancient Mystic looked at Shaela. “You have something she wants very badly. Along the way, the nursemaid was thwarted by the trapsman Ford, who found you ... with this.”

He reached over and touched her necklace. The blood-red orb sparkled in the fading sunlight.

Jaelin gasped. “I have one, too!” She pulled out her dazzling green necklace.

Artaz nodded. “The wicked queen knew Queen Trinyti held two of these Stones. Patadora thought Trinyti gave both to Shaela. Not knowing the whereabouts of the others, she concentrated her power on obtaining these from her sister.”

Both Shaela and Jaelin gasped. “You mean this wicked queen is our aunt?” Jaelin whispered.

Artaz nodded. “That’s why you must be careful. She has strong ties over the both of you -- ties of blood. The Stones have been kept safe since then, but your recent abductions bring us here, now. We need to concern ourselves with why.”

The Baret interjected. “To get the Stones, right?”

“That isn’t the full story,” Artaz admitted. “Let me begin with a bit of history. At one time, magic was abundant in the Eight Lands of Pharr. Its use was constant until the Last Wars began. At that time, one of the most powerful magicians was a man by the name of Fari Cea. He was a White Rylem, a fighter for the forces of good. His followers were my ancestors -- they founded the Keep of the Ancient Mystics at Yttralia, deep within the Land’s End Mountains.

“During the Wars, Fari Cea fashioned a set of Stones which embodied all his power. Every ounce of his strength and magical knowledge are contained within them. Upon their completion, he handed them to his daughter and died. She was given strict orders not to conjure all the Stones’ power under any circumstances. It was his other daughter they fought against and, no matter how evil she was, he still loved her. His daughter was equally reluctant -- it was her twin she had to fight.”

Jaelin and Shaela exchanged a surprised glance, but remained quiet.

Artaz continued. “The set contained four Stones -- an Emerald, a Garnet, a Sapphire, and a Diamond, each symbolizing an element of the world. United, they’re the most powerful source of magic in all the land. Only a portion of that power was unleashed against Patadora in the past, sending her into a deep slumber but not destroying her completely. Unfortunately, she’s now awake, at a time when few people can harness the Stones’ power, and only I remain of the once glorious Ancient Mystics.”

Airk spoke up. “You said the Stones symbolize other things. Like what?”

With a nod, Artaz replied, “The four elementals. The Stone of Draek, or the Emerald, is the earth. The Garnet, called the Stone of Majia, is fire. The Sapphire, or the Stone of Cyra, is water. And the clear Diamond, the Stone of Quyon, is air.”

Shaela looked up from the Stone around her neck. “When you spoke its name, it moved as if it were alive.”

“The Stones respond when called. They can be used alone, though they’re much more powerful when united.”

A look of worry crossed Jaelin’s features. “If Patadora knows their names, can she can use them against us?”

“No,” Artaz assured her. “The Stones under your protection won’t submit to any other unless you give it away freely, and then only if they are a descendant of Fari Cea. Taken by force or magic, they’re useless.”

The Baret spoke up. “Does the wicked queen know that?”

“Yes. That’s why she abducted the ladies. Or, at least, sent her Maelnords to do her dirty work.”

“Why are you telling us this?” Shaela asked, cautious. She was afraid she already knew the answer.

“I need your help in gathering the remaining two Stones and defeating Patadora Coggs.”

Shaela wasn’t satisfied. “Why can’t we just give you the Stones and be done with it? Why can’t you do it?”

“Because you and Jaelin are blood descendants of Fari Cea,” Artaz explained, a touch of impatience creeping into his voice. “Though the Ancient Mystics hold some control over the Stones from heritage, blood has dominance over magic.”

“Correct. She uses a powerful spell to extend her life. I use the same spell myself, and will continue to until I find someone to train in my stead.”

“Well, you said Patadora was our aunt,” Jaelin said, talking it through, “and you said Fari Cea gave the Stones to his other daughter. Was that our mother? Queen Trinyti?”

Artaz nodded. “You’re very perceptive, Princess. Yes, your mother knew of the spell prolonging life, as well, and she led the battle against her own sister -- her twin. But she ceased using the spell when she married your father, King Randel.

“Patadora has a daughter, too,” the Ancient Mystic warned, “and she’s been sent to hunt you down. Her name is Bhira, and she’s an offspring of the wicked queen and a Jinni, which gives her abnormal powers. She can take any form she wishes to influence you into handing over the Stones. Be careful. She also can use the Stones, since she’s of your blood.”

He looked at each of them in turn. “My job here is almost complete. I know where one of the final two Stones resides. The remaining Stone will be revealed when the first three touch. When you have all four Stones in hand, journey to Orizaba. There you’ll destroy Patadora Coggs. It’s a hard quest before you, with no guarantee of success. Choose your path wisely.”

“I’m coming, too,” Airk drawled with a casual shrug. “There’s bound to be a fight or two for me to win. All the better to impress you with, my dear.”

“And I,” Jaelin said. “I want to get to know my long lost sister, and what easier way than by her side?”

“Your father would strip me of rank if I let you go to the ends of Pharr unaccompanied,” Wray said. “And I don’t want Airk to be the only hero.”

Artaz smiled. “Good. I knew I could count on you. Pharrisans tend to be a spirited, adventurous lot. And those are just your good qualities.”