A military fort in the 1800s is no place for a refined young lady, but headstrong Lucretia insists on joining her new husband, Major Jeffrey Sawyer.

From the moment Captain Black Eagle Grant sees the Major's wife, he knows there will be trouble. Lucretia is as radiant as a morning sun but as dark as a moonless night, her eyes teeming with warmth and desire that will change all their lives.

Lucretia dislikes Eagle on sight and yet, strange desires for him wash through her in the night, even as she gives herself over to the lovemaking of her husband, who cannot believe his luck to have married such a woman, one who takes from him and demands more.

Amidst the dangers of the prairie, their lusts explode during a time of hate and unspeakable deeds, where men and women die, but desire never does.

4 STARS: "Why would a lady join her husband in a military fort during a time of war in the 1800’s? Lust. Recently married, Lucretia is on fire for her husband, the Major. She has secretly observed her friend Ruby, a prostitute, pleasure men. For a woman who was, until recently, a virgin, she knows what she is doing. That upsets her husband; he expected a blushing bride—not a brazen, worldly one. The Major decides, in a moment of anger, that maybe he cannot handle her by himself. He invites another officer to join him in pleasuring her. After a few threesomes and the demolition of the fort, she becomes an innocent victim of a conniving villain in New Orleans. Ruby tries to help, but she can only do so much. When will her soldier come to save her? Will it be in time? The characters in this story are quirky and unique. The emotion is strong. The lust is addictive. This story has a great plot and lots of sex. It is not for the faint of heart. There are many threesomes. For something naughty, this is the perfect book!" -- Stephanie Rollins, BookreviewsRus.com

No one spoke. Jeffrey looked stunned by her questions. Liz looked at Lucretia carefully, wondering why she was being so rude. Captain Grant regarded her without expression. “No, ma’am. I do not dislike you in any way. I do not think about you at all, except to say you sure do talk a lot.”

Lucretia never took her eyes off his. When he spoke, she detected a glimmer of a smile deep inside him.

They continued to stare at each other until even Jeffrey could feel the tension between them. “Well, come now, darling. Let us go see what all the noise is outside. I think it is the other wagon back from Cottonwood Creek with your trunks. Corporal Dryer told me they were delayed en route, so he had it wait for your luggage and start out as soon as it arrived. They were to travel all night, or stop to camp as they preferred.”

Lucretia did not even hear his words, as she was so engrossed in her dislike of the captain. At the door, she stopped and turned. “Captain, I am sorry if my talking is offensive to you. I will endeavor to say nothing in the future when in your presence.”

“Mrs. Sawyer, do you make it a habit of having the last word?”

Liz trailed behind them, but stopped at the door. She turned back to the captain. “I will reckon no trouble from you, sir. Be certain of that.”

If Lucretia had been asked why she was so rude to him, she would not have been able to answer. For all her sexual activity with her husband, she was extremely naïve in other ways. A mature woman might have sensed the raw magnetism the man gave off and would have been awed by it, either pleasantly or it might have frightened her. That was not the case with Grant and Lulu…at least that day.

Lucretia watched her husband pour hot water into the tub he had pulled inside the cabin. “No one will hear a thing with the wind. Makes it kind of eerie and special, doesn’t it, my wife?” He moved to the bed and took her hands, pulling her up. Without a word, he pressed his mouth to hers and forced his tongue inside. His hand began to undress her slowly, the way they both liked. “Oh, God, Lucretia. I want you. I always want you.”

He tore her shirt off and pulled her skirt up. His mouth dropped to her naked tits, suckling one, then the other nipple. She knew she was his to do what he wished, just as every time he took her like this. She moaned as she dug her fingernails into his muscular shoulders.

Eagle reclined on the bed, watching, aching with his desire to be the one holding Lucretia. He forced himself to stay still, instead of leaping up and pushing Jeffrey aside. He wanted his mouth on her tits and his hands on her legs. He wanted her moans to be for him.

His cock was harder than it had ever been, of that he was sure. He watched his commander wrap his wife’s curls around his hand and run his tongue down her neck. Her head bent back as she pressed her hips closer to her husband, clearly inviting him to do as he wished.

Jeffrey moved away from her and turned to Eagle. “I will finish preparing her bath now. She is ready—I think—if you want her. Lucretia?” he asked. “Are you ready for Eagle?”

Eagle watched her face as she turned to him. His heart jumped up into his throat when she nodded. He arose from the bed and took her into his arms, with his eyes never leaving her. “Lucretia?” It was a question that she answered with her lips, as she opened them slightly and pressed them together. The kiss was soft until she ran her tongue between his teeth, exploring him and inciting him into a storm of desires and emotions. He moved his hands to her breasts, squeezing them gently before his fingers took the nipples between them, rolling them back and forth in a way that was new to her. She moaned again and this time he knew it was for him and him alone. He fought within himself to keep from taking her right then, but felt her retreating. That forced him to let her go, but he was rewarded and rewarded well.

Lulu looked at one man, then the other. Slowly, she untied her skirt and let it drop away, exposing the rest of her naked body. “Are you sure about this, Jeffrey?” He nodded as he sat on the bed to remove his boots. “All right then, Eagle, you should get naked, too. But listen to me, both of you. If we are going to do this, then I decide what we do and do not do. Understood?”

They nodded. She moved to the tub, pulling each by one hand. She kissed first Eagle, deeply, and ran her hand down his chest. Then the same with Jeffrey. Still holding their hands, she stepped into the tub and sank slowly into the water. The men could see her body clearly through the water as she began to soap first her face, then her body. She lifted each full breast and moved the soap almost lovingly over each one.

Deliberately, she raised her heart-shaped ass for them to see, moving it slightly. She heard Jeffrey’s intake of breath and realized she was aroused herself. She wrapped her head in a towel, then lifted a breast in each hand, offering them to the men. “Anyone wants to lick them dry?”

A mouth covered each and began to tease her as she was teasing them. She reached behind them to squeeze one ass cheek. Suddenly hands were all over her…her ass, her legs, even inside her thigh. “Stop now. It is time for you two to get clean. If you want the things I think you will want, you must wash.” She felt them reluctantly release her and let her climb out of the tub.

Jeffrey bowed deeply at her, then Eagle. “You first, sir, as I get clean often, as required by my lady.”

“In that case, Major, I defer to the cleaner man.”

Lucretia thought the whole exchange to be asinine, especially with the incredibly huge erections they wore. She did not say a word, just toweled her hair as she watched first Eagle, then Jeffrey, kneel in the water to wash. Eagle was heavier and taller than her husband and his penis was stouter, but not longer, than Jeffrey’s. Ruby said that size did not matter; it was what a man did with it that counted.

She dropped the towel and walked into Eagle’s waiting arms while Jeffrey watched from the tub. Being naked against another man was frightening and exhilarating. In his eyes, she could see Jeffrey felt the same way. She raised her lips to Eagle as she put out her hand for her husband. He climbed out of the tub and stepped toward her and let out a gasp as she curled her fingers around his hard cock. She slid her other hand down to grasp Eagle’s equally hard penis.

From that point on, it was hard to know what man was doing what to her. The mouth kisses she knew, but those to her body were different and the same. Not knowing was even more arousing. She kept her eyes closed and let the caresses take her into a world of incredible sensuousness that seemed to have no bounds.

She knew the cock that entered her first was Eagle’s. His movements felt different, but no less wonderful. Initially he set a slow rhythm, but it built rapidly as she met his every stroke. So different but so much the same, she loved his throbbing cock and how it made her feel. His lips moved down to her neck, where he whispered soft words of love that blew away with the noise of the wind. Not only did she feel lust, but tenderness as well. She wanted it never to end.

Jeffrey knelt beside her head and put his dick on her cheek. She turned her head and took it into her mouth as she squeezed his balls. He moved to lie beside her, with her head on the inside of his thigh so she could suck him while he watched her hips bouncing to meet the man fucking her. She cried out as Eagle thrust into her while holding her legs wide apart. 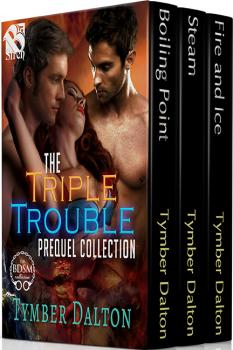 Her Dom and His Slave (MMF)
Eileen Green
In Shelf
$4.50
Tweets by
sirenbookstrand