In part five, Michael is tempted with the use of weight torture and witnesses pony play, which opens the door to new yearning.

In part six, Michael’s master shows him the basics of pony play, after an angry sub takes out some of his frustrations on Michael.

More From The Master's New Toy

"I know public humiliation has been a difficult part of your training. The last time I handled it poorly, but I think I have found a way to fulfill us both in this regard."

Dominic reached into his pocket once more and removed a leather half mask and showed it to Michael. "This will allow you anonymity. Where we are going, you will be on display. You may be touched, prodded, and pulled, but I will not permit anyone to fxxx you. After our last encounter, I won't tolerate your abuse. My hope is this will be a way for you to ease into this aspect of our play as I know it is not your favorite."

His master tugged the mask into place. Michael wasn't able to see, as there were no holes for his eyes, and that made him breathless. Not being able to see what was about to happen to him had his heart racing. He would have to trust his master implicitly, and after the last public performance, Michael felt hesitant. The mask stopped at the top of his nose, permitting him to breathe easily.

As the car stopped and Michael heard the door open, his heartbeat escalated even more. He felt the tug of the chain on his collar and began to pad out of the car, unsure of where to place his hands once he arrived at the edge of the door.

"Stand as you get out, Michael. Walk behind me."

Michael moved to the seat and twisted out of the car, slowly placing a bare foot down until it hit solid ground. He felt Dominic grasp his hand and help him up.

"There are no stairs from here to the front door. I'll guide you in. Put one hand on my shoulder."

Dominic grasped his wrist and pulled him closer. "We're going up a long flight of stairs. There is a post to your right. Grab it and I'll follow you up."

Michael grasped the guardrail and felt his master tug his chain. When he put a foot down, it met cold metal. He slowly made his way up stair after stair, bodies bouncing into him on occasion as they passed him on the left. A couple of times, his balance was thrown off, but Dominic was behind him to catch him on those occasions.

"There are three more steps, Michael."

Michael counted off the last of the steps and stopped at the top. He sensed Dominic pass him and felt his leash being tugged to the right once more. The music lessened as they seemed to enter a hallway. Michael felt as if he was in a more enclosed space and assumed it was a hall. The farther down the hall they proceeded, the quieter the music became.

A door opened and another tune played behind it, although much lower than the space they'd come through. Michael was tugged, and he then heard the door close behind him. Once inside, the cold tiled floor switched to a soft carpet under his feet. Fingers reached out to caress his body as he was propelled forward, tugged by the chain. He had no idea how many people were touching him, but it appeared to be dozens as they walked a long path.

"Two more steps, Michael, and then we'll be on a large stage."

A stage? Michael's stomach turned, and he began to tremble slightly. Unsure of what was about to happen to him, he feared the worst. Once he was on the dais, he was turned to face the direction they'd just come from and one of his hands was lifted.

"I'm placing your hands in cuffs hanging from sturdy chains in the ceiling. No matter how hard you tug, you won't be able to free yourself. I will choose when your torture is over," Dominic said at his ear. 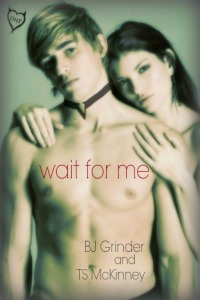 Nailing the Foreman (MM)
Kelex
In Shelf
$3.49
Tweets by
sirenbookstrand