A camping trip in the mountains sounds like a great way to get away from it all. Digby and his partner Jason, along with Mark, his partner Rahim, and Duke, their mutual friend and stud muffin, soon find the perfect spot to pitch their tents.

The first evening is idyllic. But the following morning, Digby spots a massive wall that appeared somehow during the night. With his friends, they learn the wall is in fact part of a great maze that stretches out in every direction as far as the eye can see.

Will they be able to find their way out? As they explore, they find the maze is filled with dangers beyond imagining, nightmares from the darkest reaches of the imagination. Love conquers all, but will it save Digby and Jason? Will it keep Digby safe from the jaws of madness? 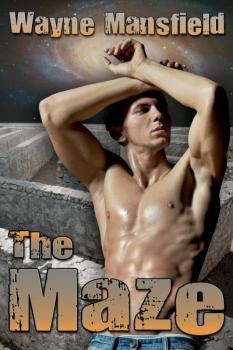 The following morning, Digby was the first one in their tent to wake up. After he stepped over Duke and undid the zipper at the front of the tent, he saw Rahim and Mark leaning out of their tent. Both were staring intently at something across the other side of the camp, but before he could see what was holding their attention so completely he discovered something of his own to ponder.

Behind Mark and Rahim’s tent was a huge, stone wall that appeared to have risen out of the earth. It must have been at least eight feet tall. The rocks it had been constructed with were roughly hewn, but stuck together so well there was only the thinnest line of mortar to be seen.

“Hey guys. Wake up,” he said, pulling on his shorts.

He shook Jason until he heard him mumble, “Go away.”

“Come and take a look at this. You’re not gonna believe it.”

He stepped over Duke, who was only just beginning to stir, and walked out to the centre of the campsite.

“What is it?” he asked Mark and Rahim, who were fully dressed and standing in front of their tent.

Digby walked across to the wall to examine it more closely. At its base there was a ridge of dirt that ran the length of the wall. Small rocks had rolled down the side and into the pine needles, and bits of tree root poked through the dark earth like old bones. There were even clumps of tired-looking weeds tucked between the earth and the base of the wall.

“It’s all around us,” said Rahim, his expression one of terror.

“No, wait,” said Digby. “There looks like a gap down there, down where…we...parked…” He scratched his head. “Where’s the bloody car?!”

He hurried towards the gap in the wall and instead of finding an exit he found another wall a metre behind it. Together, the two walls formed a corridor that seemed to go on forever. He looked in the other direction and saw a third wall blocking the path not ten metres away, although there appeared to be an opening at the end in one of the other walls. Without checking what was happening behind him, he ventured forth to investigate, finding more walls, more corridors and more openings. He wandered as far as he dared, hoping to find either Jason’s car or an exit; silently praying he found both. Yet when it was evident the complex network of walls and pathways seemed to go on endlessly, he began to make his way back.

“Did you see the car?” asked Jason, his anxious expression mirroring what Digby was feeling inside.

Digby shook his head. “No and it looks like we’re pretty much trapped in here. I went a little way down some of the corridors, but it looks like they go on forever.”

Rahim had got down on his knees and was bent forward with arms extended along the ground, praying in Arabic.

When Digby looked to Mark for an explanation, Mark just shrugged his shoulders. “He’s Muslim,” Mark whispered. “When he wants to be.”

“Why didn’t we hear anything?” asked Duke, whose tiny shorts left nothing to the imagination. “We should have heard something. I mean look at it. It’s massive.”

“Those weeds freak me out,” said Jason. “How could they have grown there so quickly? I mean, they couldn’t have grown underground.”

Digby could only shake his head. “So what are we gonna do?”

“We could stay here today and hope it disappears again tonight,” said Mark.

The suggestion hung in the air for a minute or two before Jason spoke.

“I don’t think it is gonna disappear.”