The Mechanics of Love (MM)

When he turned sixteen, Nick inherited his grandfather’s unidentified junk car left behind in the family garage. It could end his unhappy gay life if he learns how to fix it, so over the years, self-pity and enough of his father’s gin lead Nick to a plan.

With the help of a gorgeous instructor named Harry, Nick becomes an apprentice automobile mechanic. When the car finally starts, a very drunk Nick puts his plan to work.

But the car has other ideas, and Nick has to call for a tow. His plan quickly changes the moment Harry steps out of the tow truck. Will the unidentified classic car lead Nick to love? 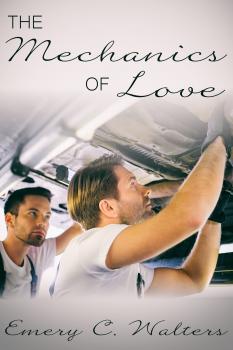 The Mechanics of Love (MM)

See, all this time, I’d been working my ass off still with this one idea of killing myself. Even though I now had skills, jobs, and I was paying my own way to learn to play the music I loved better and better, I was still firmly set on this one closed path, and I might have been still a bit heavy on the gin, or at least heavy on the stupid side.

To my utter shock, it said, at least, I think it said, but it might have been the gin talking, “About what?”

“Oh, yeah, I’ve talked about this before, remember?” I said to it. “Hermes, you are fit to die for, or fit to die in. We’re going to find a bridge or a wall or a steel pole and run all of your 152-possible miles per hour into it full head on. Or, hell, go over a cliff on the pali and surprise the snorkelers. I intend to go out in a blaze of glory.” I suddenly stopped feeling proud and happy, and dropped straight into a pit of old, familiar despair, which had never really left me. “I’ve been planning this since I got you.”

Hermes, as if he could have, replied with, “What the fuck, are you crazy? You have no insurance. Your parents will despair. Your brother will say I told you so, and all your work will be wasted.” I thought he could have at least added, “Besides, you’d be throwing away a valuable life and considerable talent!”

Deep into the booze and conversation, I said dramatically, “My life is not valuable, not even to me.”

Hermes replied, “Mine is. Have you seen what my cousin, who lived with Ralph Lauren, sold for?”

But by then, and remember, this is only a fictional conversation, right? Cars can’t talk and don’t have feelings -- right? Anyhow, by this time, I was into the vomiting and why-did-I-drink-so-much stage.

I hadn’t told anyone at class about my plans, not even Harry. I had told them my car was some sort of butt-ugly Bug. Harry just laughed and said it was good to learn on, but not worth much of anything else, then, unless ... and he blathered on about old VW vans and hippies and stuff that most straight guys seem to be born knowing, and me? I didn’t know any different at the time, did I? When he asked if he could come over and see it, I was too embarrassed to say yes. And too scared, too. Did he want to beat me up or something? Had my crush on him been that obvious? And what if I tried something on with him, and he got pissed off and hit me, or worse? Oh, hell, no, you do not need to come over and see it. I almost fainted I was so confused. My heart was filled with wanting. I felt like, if I could write down what I felt, it would end up in the best-selling romance section, that is, if I were breaking my heart over, gasp, a woman.

The Saturday after our last class, I was sitting in the car with my feet up. The sun was shining, and there was some glare off the back of the garage window. I was beginning to realize two things: one, this car was definitely not a VW Bug, in fact, I had no idea what it was, and two, I really missed Harry. I cursed myself for turning him down. If nothing else (and I was pretty sure there’d be nothing else that I’d care about, if you know what I mean), then at least he might have been able to tell me what the hell this car actually was.

Of course, the gin was already flowing, so I asked the car, I mean, Hermes, “What the hell are you, my friend?”

Hermes coughed. It sounded like he had a bug in his throat, er, fuel line. I put my gin down with a sigh. I hadn’t made any good decisions lately, had I, and the gin was one of the worst ones. Still, it paid its way in pain relief, although it caused as much as it took away. I left the car and went toward the house. I was standing on the back porch reaching for the doorknob when I heard my father on the phone.

I was about to rush inside and grab the phone, when Dad continued.

“No, he’s out on a date. You know Jane Maxwell? Yeah, Grandon Maxwell’s daughter? Well ... well, fuck you, too!” I heard the phone slam down. “He hung up on me. Must want to fuck that Jane girl himself. Ha! He has nothing to worry about!”

I froze. My dad had told a lie, implying to Harry that I was straight and out on a date with some girl. Whether that was where he was going with it or not didn’t matter. Harry, who I assumed had always figured I was straight anyhow, would now have no doubts whatsoever. What’s more, Dad’s reputation as having two fine sons (both straight) was intact. Fuck this. Why did I care? Harry wasn’t going to be batting for my team any time soon anyway, was he? Not that I’d even tried to find out, but then, it’s not like you can just ask pointblank, well, maybe you could, but I couldn’t. Too much of my father in me maybe.

I left the porch and went back to my car, breathing hard but not really knowing why. Dad’s final words were ringing in my ears, and cutting my heart in two: “No way was I going to let that little spy know my son is a fag. Well, if he is my son. Marge had that fling around that time. One can hope, ha-ha!”

I felt like my heart was draining into the earth. Back into the car I went, and this time, when I started it up, I not only grabbed the gin, but backed carefully around the garage, only knocking over one of the two trash cans, and drove off down the street. Well, peeled off down the street. The time had come. I didn’t have the place yet; I’d let the car decide. Hermes had a life of his own now, and he had a vote in this, too. Mine was the final vote -- final, hah -- but still. It would kill both of us. I had no future, and this car, though it had a past, had nothing else going for it either.