By 1816, widowed bookseller Lawrence Fenton has spent a lonely lifetime hiding who he is. He has convinced himself his feelings for his far too young, gorgeous, but troubled assistant Christy Shaw are nothing more than pride in his protégé and concern for his plight.

Lame since birth, Lawrence cannot imagine anyone wanting him, least of all Christy. But when Christy’s life threatens to spiral out of control, Lawrence steps in. Then Christy’s emotions spill over into a kiss under the mistletoe at Christmas. Will Lawrence be able to face the long-buried truth about himself and keep Christy by his side?

Lawrence wondered at the words for the hundredth time. Trust him. Trust Christy. He'd trust him with his life. He wasn't sure what he was going to do. Sometimes it felt as though Christy was dragging him back into the land of the living a piece at a time. Making him feel again, making him care. When he looked back over the last six months of his life he had gone from not giving a damn about anything, not caring about anyone, least of all himself, to this perpetual state of interest and anticipation. Anticipation at what Christy would do or say next. All because a slip of a lad wandered into his shop looking hungry and desperately in need of a friend and a purpose.

His chest hurt and he rubbed at it whilst watching Christy stitch covers quickly and place them over the old, battered chairs he had turned up with. He disappeared and came back with another piece of the cloth and put it over the tiny table he had found and then overlaid it with a white lace doily. He stood back to admire his creation, and Lawrence was forced to admit that it looked well. He put a sheet of paper on the table. Christy had laboured over his script to write the note inviting people to take a seat and offering refreshment.

He stood back and surveyed it anxiously. "What do you think?" he asked.

The fire blazed in the hearth, the room was warm and filled with the smell of woodsmoke, books, and leather, the chairs looked charming and inviting.

Christy seemed to let go of his breath. He nodded. "Not too bad. Not too bad."

Lawrence moved away and brought out a bag of holly he had purchased earlier. "I thought this might go on the mantel and around the fireplace." He handed it to Christy who dived in and yelped as he pricked his fingers. Then he laughed delightedly and pulled out handfuls. He fashioned it across the top of the mantel, and then spread some on the hearth and added red and gold bows from the ribbon he had left from the window display. It did look terribly festive. When he pulled out a handful of mistletoe and held it up with a huge smile, Lawrence smiled with him.

"Mistletoe!" He waved it about and got to his feet. "Look."

Lawrence's heart did a funny flip in his chest. "Indeed," he managed.

"We should tie some up and then people can take advantage." He held it over his head and stood there like a cherub. Golden, bright, and infinitely good. Lawrence was stunned beyond belief when he realised that he ached to go and kiss him. Touch his lips to Christy's and feel the softness of that generous mouth against his. Rub his nose softly against his, touch his lips to Christy's cheek, his eyes, his ear and whisper how beautiful he was. How good he was. He wanted to feel Christy's arms slide around his waist, Christy's head on his shoulder whilst he unbuttoned Lawrence's shirt ... Lawrence's chest constricted immediately, enough to make breathing difficult.

Completely unaware, Christy looked up at the mistletoe and laughed. He came over, held it over Lawrence's head, and before Lawrence had the faintest notion of what he was going to do, Christy kissed him softly on the cheek.

It seemed to take Christy a moment or two to realise that Lawrence wasn't laughing with him. He wished he could, but he was immobile.

"Sorry," Christy said, putting the mistletoe down. "You probably don't want customers wandering about giving each other mistletoe kisses in your shop." He looked awkward. "I probably shouldn't have done that," he said and swallowed.

Christy put the mistletoe back in the bag. 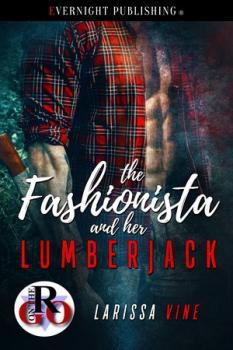 The Fashionista and Her Lumberjack (MF)
Larissa Vine
In Shelf
$2.99