The Monster of Fame

The Price of Fame Series 1

Can the voice of an angel heal a tortured soul?

Annabelle MacIntosh enters a reality singing contest to save her family from their mounting debt. Miles Oliver, celebrity judge and the owner of the biggest record company in the UK, doesn't think she has what it takes. She sings like an angel, but when she performs all he can focus on is the terror in her eyes. It's a look he knows only too well. After the pressure of fame destroyed his wife, Miles swore he'd never let the same thing happen to anyone else. Driven by the guilt he's carried for years, Miles tries everything in his power to make sure Annabelle doesn't succeed, because he doesn't believe she'll survive it.

Annabelle needs that prize money, and she's determined to win it. As she fights to make it through each round of the contest, an attraction begins to develop between the two adversaries. The longer Annabelle remains in the competition, the deeper her attraction grows to the man who's trying to prevent her from reaching her goal. Can she convince Miles she's strong enough to fight the fame monster and win? 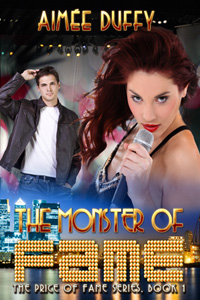 The Monster of Fame

The Price of Fame Series 1

"...this romance is a successful debut novel for a talented new author who I expect to see good things from in the future." Unwrapping Romance

"I really recommend this book for a quick romantic read." Ren at Little Bit of R&R

"The Monster of Fame is a fun, enjoyable book, one that I could not put down. Well done!" Nikki at Storm Goddess Book Reviews

More From The Price of Fame Series

The Monster of Fame
Aimee Duffy
In Shelf
$1.99 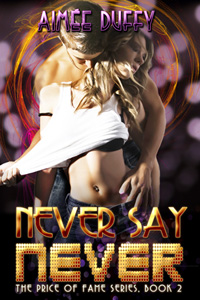 "We only have white. I hope that's okay," Annabelle said as she pulled a bottle from the fridge.

She reached for the top shelf of one of the cupboards, pulling out two glasses. A strip of pearly skin flashed at her waist as the top rose. His attention was drawn to the creamy concave of her stomach. His throat grew tight. Every part of him itched to be closer to her.

"Here we go." She carried the glasses over to the work surface he was leaning on. Her floral scent engulfed him.

She looked up at him, surprise crossing her features until she looked harder. She must have seen the feral hunger in his expression, known that when his attention dropped to her plump lips it was because he wanted to taste them. When his gaze locked hers, a flush stained her cheeks, but this time it wasn't embarrassment.

Her cobalt gaze dropped to his lips and she moistened hers. Miles doubted anyone could resist this kind of desire. This feeling went beyond lust to an almost carnal level. It was all-consuming and he didn't have the strength to fight it.

Worse still, he didn't want to.

With his mind filled with nothing but her, he dipped his head down and brushed his mouth against pink lips as soft as rose petals. He intended to pull away after a second, but need sped through his veins with a force he couldn't control. Instead of pulling back, he cupped the nape of her neck with his hand and deepened the kiss.

Annabelle's mouth opened and he could taste her sweet breath on his tongue. She melted against him as she snaked her hands around his neck. Every part of his body that touched hers burned, and for the first time in six years, he was harder than granite.

He pulled back and feathered her jaw with kisses. She gasped when he reached her neck, igniting his desire to an inferno. "Annabelle," he groaned against the skin at her collarbone. She shivered all over.

He closed his eyes and nibbled her silky skin. Just as he was about to move back to her lips, Cassie's face—gray and lifeless—flashed to the forefront of his mind. His heated blood morphed into cold sludge in his veins.

Miles released her, instantaneously jumping back as if her touch burned him. Annabelle's skin flushed and her eyes were so dark they were no longer blue. Confusion colored her expression, and he couldn't speak. Guilt lay heavy in his gut, threatening to travel up his throat and choke him.

Closing his eyes, he pinched the bridge of his nose and took a deep breath. Cassie's face—cold and lifeless—was ingrained against his lids and the sick feeling came back, the same as it had when he'd found her dead in their apartment.

He opened his eyes to Annabelle's crestfallen face. His was so numb he couldn't imagine what kind of expression he wore.

"I…can't," he choked out and started toward the door, pushing away her outstretched hand. Once outside he gulped in a breath of cool night air and jumped into his car. What had he been thinking? He was supposed to befriend the girl, not kiss her until he became drunk with desire.

Miles barked out a hard, humorless laugh. There really wasn't any point in bothering to kiss anyone at all, especially since he couldn't take things further with anyone, let alone with Annabelle. No matter how much he might want to.

The Baby Contract
Olivia Starke
In Shelf
$3.99
Tweets by
sirenbookstrand