The Moth's Song and Other Stories

Seven splendid tales of eerie erotica and supernatural sex. To wit:
Life In Deep Rock, where creatures made of echoes avenge a cheating wife's death The Devil's Lesson, in which a rock guitarist finds that making love to the Prince of Darkness is not what she thought The Moth's Song, a horror story of miscegenation across nature's very order... Incubus: surreal, mind-shattering sex with a being from a place where dreams go to die... The Donor, a willing victim supplies a blood meal to a flesh-and-blood vampire... Hole, in which we learn how things in the earth give rise to unspeakable desires... Vampires on a Train: a trip at once exciting, erotic, and poignant, and surprisingly human. All stories soaked in the sex, sensuality, and rich atmospherics you've come to expect from Dr. Mabeuse, Master of Ecstatics. 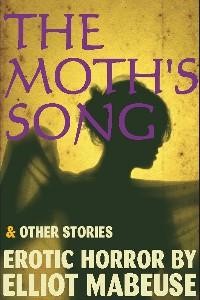 The Moth's Song and Other Stories

The devil's kiss was like nothing she'd ever experienced in her lifedevastatingly sensual and sheer ecstasy on her lips, but with the heat of hell behind it, all the distilled passion of an infinity of lovers who'd gone before, refined and contained in that kiss. It was pure desire, pure worship, pure promise, and Lydia had never felt anything like it.

Maybe he was right and she didn't have a soul. But his kiss drew something out of her, something that lived behind her heart and above her pussy and in her throat and her eyes and her ears. His kiss was like a whirlpool of stars, like falling into an oblivion so sweet she could scarcely endure it but thought she might pass out. And then he put his tongue in her mouth.

It was his tongue that saved her, lewd and seeking and tasting her everywhere. The thrill of his tongue in her mouth brought her back into focus and stopped her from dissolving into a million shards of bliss. The devil leaned over her and held her free wrist down and pressed his hard, powerful body against her and slid his tongue into her mouth, and Lydia knew immediately that it had been the devil's tongue that had tempted Eve in the garden of Eden, and that no woman would ever be able to resist a tongue like that. It slid into her mouth and knew her, knew every place to touch, every spot to tickle, as if it knew her every secret, and though she knew that tongue had known a million mouths, it somehow found hers the sweetest of all.

Lydia groaned. She was throbbing now and lubricating, and she felt all liquid down there and ready except for her thighs, which ached to open and embrace the steel-like columns of his legs. He let go of her wrist and her hand went up around his naked back, and he was smooth and warm as any man she'd ever touched, but beneath that skin she could feel the hard strength of muscle that could do anything, that knew no limits. Beneath his skin he felt like he was made of steel and polished marble.

The devil lifted his mouth from hers and he was smiling, and Lydia lay there with her eyes closed and her mouth open both in astonishment and in invitation to be taken again. He dipped his big head and licked her tongue and picked off a drop of saliva, and Lydia groaned, feeling that viscous strand stretch from his tongue to hers, then he kissed her again, hard, taking possession of her as a man takes a woman.

Her eyes fluttered closed as her nostrils dilated wildly for breath, and she felt the tip of his tongue sliding down her throat, past the point that made her gag to touch a spot in her throat she never even knew existed, a spot as sensitive as a little clitoris that sent heat rushing through her limbs and a gush of hormones into her system, swelling her breasts and her pussy and starting some maddening, sucking contractions deep within her, as if her body was already practicing to draw him in, needing him like she'd never needed a man in her life.

"Yes, Lydia, I know you," he said. "I know all about you. Everything you've dreamed of, everything you want"