From the moment he finds The Naked Remedy, Noah Booker is enthralled. Not only because the blog owner is gorgeous or that the nude photos are hot, but because Fisher uses his platform to face his fears about a crippling accident, as well as the aftermath of putting his life back together.

Noah isn’t brave. He copes with his shyness by staying in his comfort zone. At twenty-six, he still hasn't come out or left his conservative hometown. Finding the blog offers a beacon, but when he summons the nerve to comment, he never expects Fisher to respond.

The two men strike a friendship. Sparks fly, but dating isn't easy. Noah lives in California, and Fisher's in Florida. But making it work takes more than coordinating schedules. It means taking risks. For Fisher, though, Noah will try. Because if he's learned anything, it's that change only happens one step at a time. 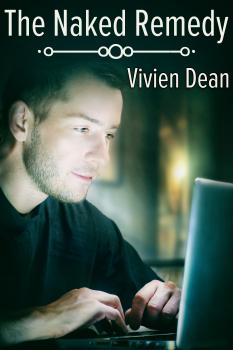 When I flopped onto my bed, I had forgotten about the blog and everything online-related. I was almost asleep when my phone pinged from my pants pocket. Rolling onto my side, I peered at the garment I'd left piled on the floor. I was pretty sure it wasn't a text. My small handful of friends was all from work, and none were the type to bug me on a Friday night. More likely, it was new email. Whatever it was, there was no way it was important enough to check, except for the fact that if I didn't plug my phone in to charge overnight, it would be dead tomorrow in case I did end up venturing out of the house.

Digging the phone out of the pocket, I thumbed open my email as I trudged to the desk. I stopped short when I saw it was a response to my comment about Fisher's love life, but hit the link to read it without pause.

It was from Fisher.

Thanks. You have no idea how badly I needed to hear something like that tonight.

My exhaustion forgotten, I switched out my phone with my laptop and went back to my bed to log on. Within seconds, I was on the Naked Remedy site. The comment had come within the last minute. The time difference made it after midnight in Florida, but Fisher was obviously still up.

I replied to his comment with my pulse pounding.

Considering what you're doing by putting yourself out there like this, it's the least I can do.

I almost added more. My fingers hesitated at the period. I wanted to tell him how much I identified with what he was writing, even though I couldn't even imagine going through what he had. But everything that came to mind sounded trite or pandering, and afraid that I'd chicken out of saying anything at all, I sent off what I'd already typed out.

Then it became a waiting game.

Would he write back?

What could he possibly say? I hadn't exactly given him much to work with.

I should've asked a question or found something else to draw him out. It was too late for that.

Shaking my head, I closed my laptop, determined to be the bigger man and not sit there like an idiot for a comment that was probably never going to come anyway. I was halfway off the bed when my phone pinged.

Nobody in the western world has ever logged onto a machine as fast as I did right then.

I'm always here if you need to reach out. It's a long, long road when you travel it alone. Just hit the Contact Me.

I'd seen him make the offer to other commenters along the way, as well as remind people in his posts that anyone who wanted to talk to him just had to use the form on the site, but having him extend the same offer to me felt bigger, more significant than those other insistences. I know it was because of the crush I was harboring. I wasn't so blinded not to see that. But that didn't change how it felt, or how close to tears I got at the thought of someone out there who I could say anything to.

It had been a very long day, and I was too tired not to have all my emotions so close to the surface.

My reply was short, but heartfelt.

Thanks. I'll remember that the next time the road catches me out.

Though there was no reason for him to come back, I kept my laptop out just in case. Sleep didn't seem so important anymore. Besides, my fantasies about how further contact might play out were more interesting than any dream could be.

I believed that until I crashed an hour later, my computer still open next to me, my hand resting on the keyboard. My imagination was as invested in the potential Fisher offered as my emotions had been. It took a wild ride through the Everglades as I stole Fisher away for a date to get his mind off whatever had happened on his disastrous Friday night.

I'm pretty sure I spent most of the night with a smile on my face. Sleeping or not.